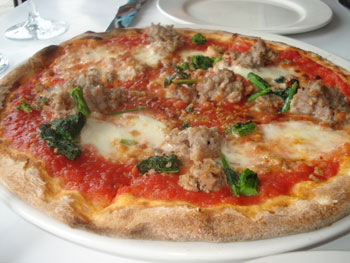 Pizza
© Paula Trites
Contents hide
Pizza is a flat-bread with savoury ingredients on top. It can provide a quick-cook meal.

All toppings put on a Pizza are already cooked, though some say the sauce shouldn’t be. Ingredients almost always include cheese and tomatoes.

Many purists avoid commercially-made pizza in any form (unless they’re in Naples), and make it at home. It’s difficult to always know, though, if anyone from Naples would recognize some of these versions. Now, people are making the base out of almost anything: white sandwich bread brushed with oil, frozen biscuit dough, tortillas, and even egg roll wrappers, mashed potatoes or puréed beans.

Protests in France about fast-food never seem to address the topic of pizza.

To reheat leftover Pizza: put a non-stick pan on a stove-top burner, and turn the burner’s heat onto medium. When the pan is hot, put the pizza slices into the pan upside down, so that crust is on top. Flip it when you can see the cheese starting to melt, and let it continue heating crust-side down until the slice is heated through.

Or, reheat uncovered in oven or toaster oven at about 350 F / 175 C. Covering it will make it soggy. Watch it closely; it only needs about 10 minutes; after that, it will start to dry out.

Most people agree that the worst way to reheat left-over pizza is in a microwave.

Pizza dough can be made from scratch effortlessly in a bread machine.

Tomatoes are not traditional to pizza: they are a new-world food, and weren’t generally accepted in Italy until towards the end of the 1500s.

It’s a bit pointless to try to figure out who or what people might have been the first to think of putting some ingredients on top of a piece of flat bread and heating it all. It could have been the Assyrians and Sumerians or even from a non-literate people before the. Unfortunately there are no records.

We can logically surmise however that early people would have cooked flatbreads on top of heated rocks, and probably got the idea of tossing a few things onto the flatbreads while they were cooking.

The Greeks baked flat breads garnished with items such as cheese, garlic, herbs, oils, olives, onions, and vegetables, which they called “placuntos.”

The Romans put ingredients on flat, round bread and baked it.

Instead, it may be more profitable to focus attention on when did flat breads with ingredients on top, heated, begin to closely resemble what we today call “pizza.”

Pizza alla margherita is made with tomato sauce, mozzarella cheese and basil. It appears to have been created by Raffaele Esposito, at his pizzeria called “Pietro il Pizzaiolo.” The ingredients were chosen because they are the colours of the Italian flag. The occasion was the visit of Queen Margherita of Savoy and her husband King Umberto I, to Naples in 1889. They were staying with the queen’s family at Capodimonte Park in Naples. The pizza was reputedly sent to her at the palace, possibly making it the first recorded pizza delivery.

It is pretty much agreed that it was Neapolitan immigrants who brought Pizza to large cities in America, and sold it largely to themselves and other Italian immigrants at first. The first non-Italian Americans to discover it en masse may have been those American soldiers who had been in Italy during World War II, and came home looking for it.

The first pizzeria in New York is reputed to be that opened by Gennaro Lombardi from Naples in 1905 at 53 ½ Spring Street. Working for him were John Sasso, Anthony “Totonno” Pero and Patsy Lancieri. He only added tables and chairs in the 1930s.

In Dundee, Scotland, they were deep-frying frozen pizza as early as 1980, before anyone there even got the idea of deep-frying Mars Bars.

Dessert pizzas started appearing in the 1990s as a novelty item.

In 2010, police in Naples began investigating suspicions that pizza parlours in Naples were saving money on their wood-burning ovens by using wood from coffins dug up by thieves in the city’s graveyards. 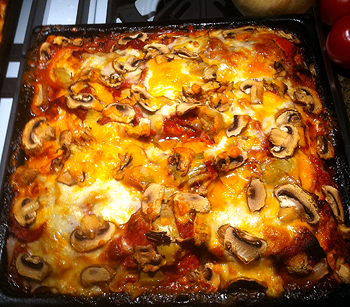 CooksInfo.com has not been able to find any mentions of “pizza,” the food, in American newspapers prior to 1902. Any instance of the word “pizza” prior to that time period was found to be a misspelling of the word “piazza.”

The first occurrence in our searches of the word “pizza,” referring to the food, was in a story about a 1902 visit to America by the Italian composer Pietro Mascagni (1863-1945), who sailed to America on the American Line’s ship Philadelphia for a tour of New York, Philadelphia, Boston and San Francisco. Only the San Francisco leg of the trip was not a complete fiasco. Upon arriving in New York, Mascagni’s entourage was even quarantined because they arrived with Pink Eye. The article makes light of Mascagni’s longing for Italian food in the New World:

“‘Maletesta America’ is likely to be the title of the next opera which comes from the pen of Pietro Mascagni, the composer of ‘Cavalieria Rusticana,’ that is if he is true to himself and writes the strains that are coursing through his brain….When Mascagni left the sunny skies of Italy and the home of Pizza Neapolitana…. he never dreamed but that in a country so progressive as America, Pizza Neapolitana was a familiar article….’Figlio mio, thou shalt see the world, and we will eat our Pizza Neapolitana together upon the American strand.’ …. breathless and distinguished Mascagni went on a still [sic] hunt for Pizza Neapolitana. All through the length and breadth of New York City he sought his Pizza but no one knew it… But his good angel had not deserted him. In his company was Eugenia Mantelli, the famous contralto, and owner of the equally famous recipe for pizza. Finding the sad state of the Maestro’s nerves she hied her up to Fifty-second street where dwelt her friend Katharine Evans von Kuenner, Marquise de Pateri. This lady, as behooved one of New York’s first singing teachers, had lived long in Italy and knew the trick of using olive oil… To the studio repaired the prima donna contralto, and hastily sending out for a gallon of oil and a bunch of garlic the two ladies proceeded to prepare the lunch to which Mme Mantelli had bidden the sorrowing Mascagni. To be sure of correct atmosphere, madame ranged her pupils round the walls of her kitchen and kept them singing the sextette from ‘Lucia,’ and selections from really truly Italian masterpieces until the pizza was cooked.”

Most people presume that the word “pizza” probably comes from the word “pizziare”, meaning “to pinch or pluck.” “Pizza” first appeared in Neapolitan dialect around 1000 AD as “piza” and “picea.”

Some sources say they have found the actual word “pizza” used in 997 AD in Gaeta, a port between Naples and Rome.

Pizza in Naples ‘cooked with wood from coffins’. London: Daily Telegraph. 18 May 2010.