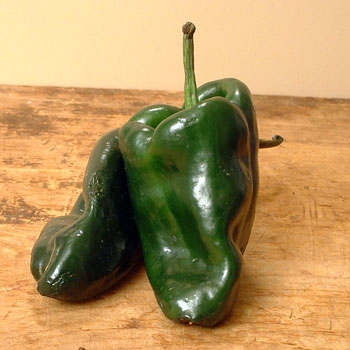 Poblano chiles have a relatively mild heat, about 2,000 Scoville units.

They are never eaten raw; they are always cooked. Most of the poblanos grown in Mexico and the United States are roasted and peeled, and then canned or frozen.

Their size and thick sides make them easy to stuff. Their milder heat will not overwhelm other tastes. In fact, most recipes for stuffed chile (“chiles rellenos”) will suggest you use poblanos.

When dried, poblanos are flat and wrinkled. But here’s the catch: when dried they are not only called something different, but they are called two different things.

The poblano plant generally grows about 60 cm (2 feet) tall, and starts flowering about 6 weeks after sowing. It produces shiny, dark green chile peppers about 10 cm (4 inches) long, about 4 cm (2 1/2 inches) wide, tapering to a point at the far end, with thick, fleshy walls.

Remove the skin before cooking.

1 kg poblanos as purchased, with stems = 900 g stemmed and seeded

The heat level is quite mild, about 2,000 Scoville units.