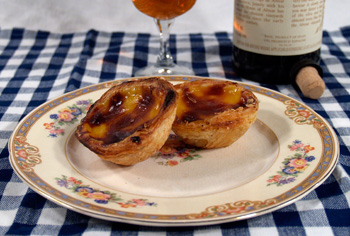 They are relatively small, and can be eaten in three to four bites.

The custard goes inside crisp, flaky pastry shells, made from a pastry called “massa folhada.”

Some versions make the custard softer, others stiffer. The custard typically has browned patches on it.

The tarts can be sprinkled with powdered sugar and cinnamon when served.

Antiga Confeitaria de Belém (the old Belém bakery) is the most famous bakery that produces Portuguese Custard Tarts. It has been making them since 1837 (see History Section below), and has been family owned the entire time.

In Portuguese, the bakery call its tarts “pastéis de Belém” (“Belem tarts.”) In fact, the family had that product name registered in 1911 to ensure that only their bakery could use it. Anyone else must call their tarts something like “pastéis de nata” (“cream tarts” — there isn’t really a word in Portuguese for custard.)

Their bakery oven, reputedly, runs at 750 F (400 C), a temperature high enough to easily produce the brown spots on top the tarts, and to bake the tarts in three to four minutes.

Portuguese Custard Tarts have spread to various parts of Asia.

The first place of landing for them seems to have been in the Portuguese colony of Macau, when Lord Stow’s Bakery began making and selling a version of them that they called “Egg Tarts.”

In 1997, Lord Stow’s opened a branch in Hong Kong, and began selling the tarts there. (By 2009, the bakery had licenced their making to the Excelsior Hong Kong hotel.)

The Egg Tarts were so popular that other Hong Kong bakeries started making them. Even the Kentucky Fried Chicken restaurant chain in Hong Kong started offering them.

The pastry is flour, water, salt and butter. You mix the flour, water and salt to make a dough, then work the butter in evenly, sort of as you would for croissant, with foldings and turnings, and then chill it. (Some home bakers use store-bought puff pastry as a quick substitute for the crust.)

The custard is an egg and vanilla custard.

You line tart cups with the dough, pour in the custard, and bake about eight to nine minutes in a very hot oven. The oven needs to be very hot, about 550 F (290 C.)

To get brown spots, which typically only come from a very hot oven, you can try moving the tart pan up to the top rack of the oven for a few minutes at the end of cooking.

Many recipes are available on the web.

Portuguese Custard Tarts probably originated at the Mosteiro dos Jerónimos (Jerónimos Monastery, established 1496 by King Manuel 1st) in Belém, in the southwest part of Lisbon, Portugal in the 1700s. The monks there had made the custard tarts for sale. Their custard, like most, didn’t use egg whites, but that wouldn’t have gone to waste: it could be used for other things such as clarifying Port wine, starching clothes, etc

The monastery was dissolved in 1833, when Pedro I of Brazil (IV of Portugal) suppressed all monasteries and convents in Portugal and appropriated their property.

A man named Domingo Rafael Alves bought the recipe; it is presumed he bought it from a monk who was now dispossessed. In 1837, he opened a bakery called Casa Pastéis de Belém near where the monastery had been. Among other things, the bakery made the tarts.

“Pastel” is “tart” in Portuguese; “Pastéis” is the plural, “tarts.”

This web site generates income from affiliated links and ads at no cost to you to fund continued research · Information on this site is Copyright © 2021· Feel free to cite correctly, but copying whole pages for your website is content theft and will be DCMA'd.
Tagged With: Portuguese Food