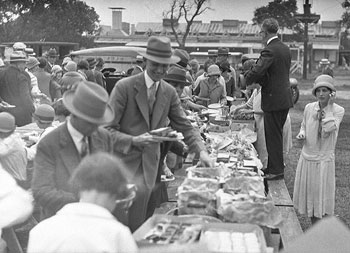 A Potluck Supper is when everyone invited to the meal brings some food, generally already prepared and ready to eat, unless some of it is a food to go on a grill. They are often held at workplaces, churches. They can occur at any time of year: summer, Christmas, 4th of July, Victoria Day, etc. There is not supposed to be any charge for attending the supper, or any compensation for those bringing food.

They are called “pot luck” because everyone brings a “pot” of something, and you take your luck with what’s on offer.

Many types of dishes are particularly popular for potlucks. All, of course, tend to be make ahead dishes. Many people have one recipe that they rely on as their “Potluck Supper” dish. Some even have one particular bowl or casserole pot that they will always bring their food in, so others can identify the food as theirs. Popular dishes include Jello-O salads and casseroles (tuna, noodle, etc.)

In organizing a Potluck Supper, sometimes it may just be left to the discretion of the guest what to bring; othertimes, the organizer will direct various people what to bring, particularly if the number of guests is small, to ensure that all bases are covered. You can still allow some freedom of choice, and some of the fun of chance, but still cover all the food bases, by assigning a category of dishes by last name. For instance, last names beginning with A through F, bring a main course, G through N a salad, O through U a veg, V to Z a dessert. People generally need at least a week notice, to plan time to pick out, shop for and make their recipe.

Occasionally, people indicate a theme for people to cook around, such as comfort food, Italian, Retro, Mexican, etc.

You need to remind your guests bringing food to label their pots, pans, bowls, plates or containers.

You will need lots of serving spoons, and to have lots of hot pads handy. Be prepared for crunch time in the kitchen as various dishes arrive, competing for heating space in the oven or microwave. Crock pots are a boon, for keeping foods safely warm.

If you are invited to a Potluck Supper, make sure you focus on a recipe that will be easy to transport when it’s made. If you’re bringing your food in a crockpot, alert your host at least a day in advance so that an extension cord can be arranged if needed to bring power to the buffet table.

There is always too much food at a Potluck Supper — everyone brings too much, because they don’t want to look cheap.

Some people consider Potluck Suppers rude, especially those from other cultures, because you invite people for dinner and then ask them to bring food.

Government Health Boards in various jurisdictions have been itching to ban Potluck Suppers, or regulate them in the same way as restaurants and grocery stores are governed, banning home-cooked foods from them. Illinois had to pass a state law in January 2005 telling its Health Board to keep its hands off of potluck suppers.

In the fall of 2004, the Washington State Board of Health decided to exempt potlucks, both private and open to the public, from the state’s new food code.

They defined a potluck as an event at which:
(a) People are gathered to share food;
(b) People attending are expected to bring food to share;
(c) There is no compensation provided to people for bringing food to the event;
(d) There is no charge for any food or beverage provided at the event; and
(e) The event is not conducted for commercial purposes.

Called an “American supper” by some in the UK.

This web site generates income from affiliated links and ads at no cost to you to fund continued research · Information on this site is Copyright © 2022· Feel free to cite correctly, but copying whole pages for your website is content theft and will be DCMA'd.
Tagged With: American Food, Canadian Food, Meal Types, Technical Terms