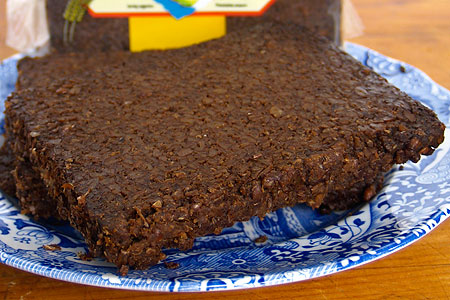 Pumpernickel is a bread that is traditional in the Westphalia region of Germany.

Pumpernickel is very dark brown, almost black at times, with a heavy, coarse, dense texture and almost no crust. The taste is slightly sweet and slightly sour. There are no caraway seeds, as there are in the America version.

It is made from flour of coarsely ground unbolted rye, along with a small amount of wheat flour. The dough is traditionally leavened with a sourdough starter. The bread is usually baked in long narrow pans with a lid, reminiscent of Pullman pans. The bread gets a long, slow baking, anywhere from 16 to 24 hours, at a temperature of 149 C (300 F) in an oven with steam in it. During this long baking time, a Maillard reaction occurs between the sugars and the acids in the starter, which naturally darkens the bread.

It is served sliced very thinly.

You can also buy it sold in sealed tubes of round, thinly cut pieces, ready to receive toppings and be made into hors d’oeuvres.

There are certain German food laws that govern Pumpernickel making. 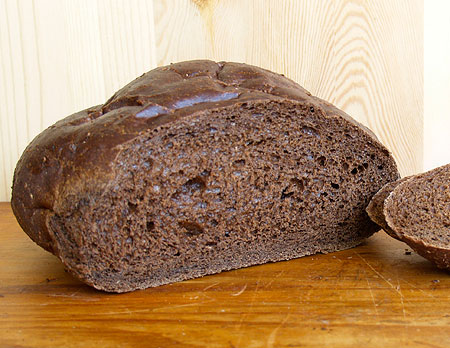 American-style Pumpernickel Bread is really a wheat and rye bread artificially coloured dark, rather than pumpernickel. It is often made in round, hand-formed loaves from refined rye flour, and wheat flour.

The crumb is not dense, and the taste is very different. Its production method forgoes the long baking process, and instead uses an ingredient such as coffee, molasses or cocoa powder even to colour it. Regular yeast is used to leaven it instead of a sourdough starter, to save time, and citric or lactic acid are used to imitate some of the taste that a sourdough starter would have given it. Many versions often add caraway seeds.

This style of bread is often found in Jewish delis.

Pumpernickel bagels are made from the same type of dough.

People who have grown up with the imitation style of pumpernickel, unsurprisingly, often prefer it and can be (unpleasantly) shocked when they taste the real thing.

Slices of genuine Pumpernickel can be fragile to make a “two pieces of bread” sandwich from, and are perhaps best used with open-face sandwiches, or cut into fours for use with hors d’oeuvres, etc.

Once a cellophane package of genuine pumpernickel is opened, you may want to store it in the refrigerator. It is very moist and has no artificial preservatives so it can be vulnerable to mould.

Discount any explanations of the word Pumpernickel that have anything to do with a French soldier’s horse, or with the devil farting (even dictionaries such as Merriam Webster and American Heritage have fallen for that one.)

This web site generates income from affiliated links and ads at no cost to you to fund continued research · Information on this site is Copyright © 2022· Feel free to cite correctly, but copying whole pages for your website is content theft and will be DCMA'd.
Tagged With: Yeast Breads