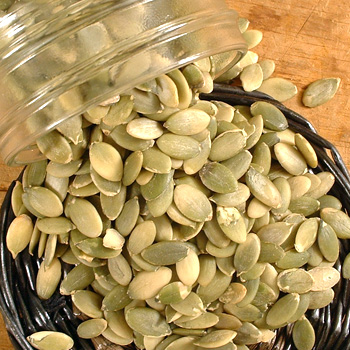 In Eastern Europe, certain types of pumpkins are grown especially for their seeds to be made into oil. The pumpkins are squished by machines right in the field, the seeds extracted, and the pumpkins discarded right back onto the fields to be used as fertilizer.

In North America, pumpkins are grown for processing into pie filling, and the seeds are the by-product. These seeds can be toasted and seasoned for eating as a snack, or used as an ingredient in cooking.

Pumpkins that have hull-less seeds have been developed for the snackseed trade. The seeds aren’t really hull-less; it’s just that the seedcoat is so thin it doesn’t need to be removed. One variety is Snack Jack Pumpkins, which consumers can buy to grow at home; another variety, termed “NH1041”, has been bred primarily for commercial use. [1]

To roast, remove seeds from pumpkin flesh. Wash and remove any clinging flesh.

Some people recommend to brine the seeds overnight at this point, saying it helps particularly if the seeds aren’t hull-less; that the brining makes the seed shell easier to crack later.

At this point, you may wish to toss them seeds in some oil and some seasoning before roasting; if so, let the seeds dry first before doing applying the oil and seasoning.

Use pumpkin seeds as an out-of-hand snack food; other uses include as a topping for muesli, other cereals, yoghurt, salads, soups, in muffins, in trail mixes, or in smoothies (grind first on their own.)

Most of the fat is unsaturated. High in magnesium and zinc.

There is a growing belief among men, which is clinically unproven as yet (2012), that pumpkin seeds can help promote prostate health. “Pumpkin seed oil has become popular today as a treatment for prostate enlargement ( benign prostatic hyperplasia, or BPH), and it was approved for this use in 1985 by Germany’s Commission E. However, there is no meaningful evidence that pumpkin seed is helpful for this condition. Only double-blind, placebo-controlled studies can prove a treatment effective, and none have been reported for pumpkin seed oil alone.” [2]

This web site generates income from affiliated links and ads at no cost to you to fund continued research · Information on this site is Copyright © 2021· Feel free to cite correctly, but copying whole pages for your website is content theft and will be DCMA'd.
Tagged With: Pumpkins, Seed Pumpkins