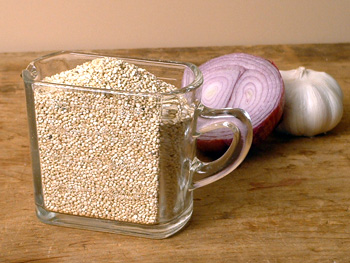 Quinoa is used as a grain, but it’s actually a seed. It grows on a plant that ranges from 4 to 6 feet (1.2 to 1.8 metres) tall, whose stalks flower and then produce tiny seeds about 1/8 inch (32 mm) in diameter, that can be white, black, pink or red.

The plant it grows on (scientific name “Chenopodium quinoa”) belongs to the “goosefoot” family of plants, and is related to spinach and chard. It is somewhat cold hardy.

The taste of the seeds is generally mild; attempts to describe it range from “grassy” to “nutty.”

It became fashionable on Western dinner plates in the 2000s, being marketed with phrases such as “wonder grain”, “more protein than wheat”, “ancient food treasured by the ancient Incas…”

This, however, has caused some displacement in its native lands where it was a staple food. Farmers in Bolivia now grow it for mass export abroad, causing domestic prices to triple in five years, and domestic consumption to collapse by over 1/3 in the same time period. With a bag of quinoa in Bolivia now costing five times as much as a bag of rice, poorer Bolivians are being forced to turn to the less nutritious rice. This is causing health issues in a country where children are already undernourished. Western foodies are literally, though unknowingly, taking food away from the mouths of the children there.

To many people’s tastes Quinoa is unpleasantly bitter. The black and red seeds are the most bitter; the white ones less so. The bitterness comes from a waxy coating on all the seeds called “saponin resin”, which is nature’s way of making them unappealing to birds and insects. Almost all Quinoa sold commercially is processed to remove most of this bitter coating, but you’ve still got to do a bit of followup work with thorough rinsing.

And even that doesn’t entirely clear away the bitter taste. You really need to combine it with other grains so that its bitter flavour isn’t as pronounced.

You’ve got to use a lot of water in getting Quinoa ready to cook. That bitter waxy coating is water soluble, so you can shift some of it. Soak all the seeds in water for 5 minutes. Then rub all the grains through your hands, then put in a strainer and rinse under running water, running your fingers through the seeds until the water runs clear and there is no foam or suds left amongst the seeds. You are going to have to run the water for several minutes.

To cook, use 2 parts of water to 1 part of dry seeds. Bring to the boil, cover, then simmer for about 25 minutes until tender. Then fluff with a fork.

Quinoa does not have enough starch in it for a successful risotto-type dish.

Quinoa is valued for having good balance of proteins, better in fact than most other grains. It contains all eight essential amino acids needed for tissue development in the human body.

The seeds also have iron and calcium.

The bitter substance that coat the seeds may be somewhat toxic.

3 to 4 weeks at room temperature; to store longer term refrigerate or freeze so that the protein doesn’t go rancid.

The Incas in Peru counted on Quinoa as a principle food, just as others elsewhere relied on rice or wheat. It has been grown for over 5,000 years in the cool, dry highland plains of Bolivia, Peru and Chile.

Pronounced “keenwah” or “ke-chewa” or “kee-noo-ah”, depending on the dialect, meaning “mother.”