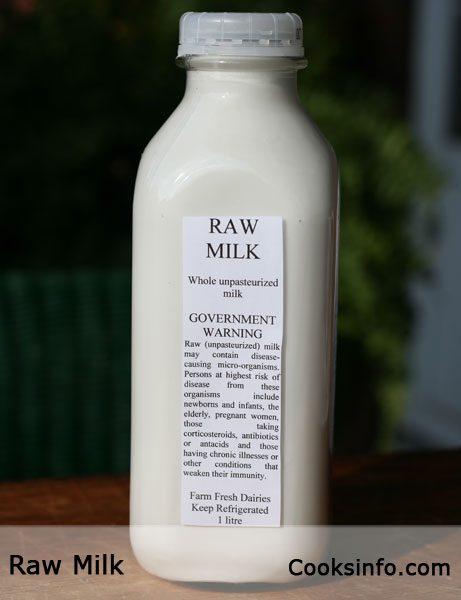 This phrase is usually used in reference to cheese-making. Cheese connoisseurs swear that pasteurizing milk affects the taste of the cheese. They say that while the flavour of pasteurized milk cheeses is pretty much fixed for their life span, the flavours of cheeses made from raw milk really evolve and develop as the cheese ages.

The French use raw milk a great deal in making their cheeses. Many of these cheeses are banned in North America for this reason.

The USDA (United States Department of Agriculture) requires that cheeses made with raw milk must be allowed to age at least 60 days before they can be imported into America.

In Canada, the same time restriction has been the norm, even for domestically-produced cheeses. The province of Quebec, though, introduced in 2008-2009 new regulations allowing for the domestic production and sale of non-pasteurized milk cheeses without the 60-day aging requirement. [1]Regulation Respecting Food. Food Products Act (R.S.Q., c. P-29, s. 40.) CHAPTER 1, GENERAL PROVISIONS, Division 11.6 . Gazette officielle. 30 January 2009.

To be clear from the outset, there is absolutely no evidence in science that raw milk is more nutritious than pasteurized. The National Fluid Milk Processor Promotion Board in the U.S. says:

“Some people believe raw milk is better for lactose intolerant individuals or easier on digestion, while others think it can help treat asthma or allergies or boost immune health. Some also believe it’s nutritionally superior or better at preventing osteoporosis. In reality, none of these are true, pasteurization does not significantly impact nutrient content, and pasteurized milk comes with all the same benefits (and none of the risk) as raw, unpasteurized milk.”

There is however, undisputed evidence that it is more dangerous.

In Canada, the sale of raw cow’s milk anywhere in the country has been banned since 1938 under the “Milk Act.” It is the only country in the G8 to have such a national ban.

Mechanisms to get around the laws, such as cow-share programmes, are clamped down on severely. Michael Schmidt, an Ontario producer of raw milk, had his farm raided in November 2006 by 20 to 25 (estimates vary) government officials and officers, some armed. [2]Johnson, Nathanael. The revolution will not be pasteurized: Inside the raw-milk underground. Harper’s Magazine. April 2008.  [3]Lofts, Norman. Documentary Film “Raw Milk Crusader: Michael Schmidt.” CBC NewsWorld. October 2008.  [4]Ogilvie, Megan. Raw milk farmer calls case against him unconstitutional. Toronto: Toronto Star. 27 January 2009.

Raw milk in the United Kingdom

In the UK, raw milk is designated by a Green Top on the bottle. (See the entry on Milk for details on what other bottle cap colours mean.) It can be sold in Northern Ireland, England and Wales, but only directly by the producers at farms and farmer’s markets. Its sale in stores has been banned since 1985. In England and Wales, the milk being sold must bear the following advisory: “This milk has not been heat treated and may therefore contain organisms harmful to health.” [5] Labes, Lucinda. Untreated milk is in demand. London: Daily Telegraph. 18 January 2008.
In Scotland, the sale of raw cow’s milk is banned outright under any conditions. Efforts were made in 1998 to extend the ban to milk from sheep, goats and buffalo, but no legislation was passed. [6]UK Food Standards Agency. Historical background to the different control requirements for raw drinking milk and raw cream in the different countries of the UK. 24 June 2005. Retrieved February 2009 from http://www.foodstandards.gov.uk/aboutus/ourboard/boardmeetoccasionalpapers/rawmilkintpaper

The UK government has considered banning its sale outright many times, but the stopping point at the present (2009) seems to be the prospect that they could put English and Welsh producers out of business, while under EU law the government couldn’t stop people from bringing it back from France, where it is freely sold.

The French don’t currently seem amenable to changing their Milk laws to make life easier for the English authorities.

Raw milk in the United States

In America, the legality of selling raw varies.

Interstate sale of raw milk is banned federally by the FDA.

Twenty-three states ban its sale outright under any conditions for human consumption, according to Time Magazine in 2007. (In those states, you may see it advertised as “for pet consumption.” Cow-share programs have also sprung up.)

Among the states that allow its sale under certain conditions (permits, only from farm-gate, etc) are Kansas, Massachusetts, Minnesota, Missouri, Nebraska, Oklahoma, Pennsylvania, South Dakota, Texas, Utah and Vermont.

“One of the most unique farm buildings, that will certainly remain unaltered, is the dairy built by Queen Victoria in 1861. With marble counter tops imported from Russia cooled by water running through them, milk was poured in the individual pans and then the cream was separated. Beautiful carvings adorn the walls.

Although the building hasn’t been used for 90 years everything has been left as is and is polished every week, said [Adrian] Tomlinson.

What hasn’t changed over the centuries is that these herds put raw milk on the Royal family’s and other consumers’ tables, said Tomlinson. The Queen drinks raw milk from her Jersey herd and when Princes William and Harry were being educated at nearby Eton, “I would bottle up some milk from the Ayrshire herd every day and run it over to them.”

A small ice cream stand in the tourist section of the grounds advertised the product made from raw milk at Windsor, along with humane cattle handling, and the lineup was long.” — Gumming, Ian. Dairying on the historic grounds of Britain’s Windsor Castle. London, Ontario: Ontario Farmer Newspaper. 5 September 2006. Pages 22-23.

This web site generates income from affiliated links and ads at no cost to you to fund continued research · Information on this site is Copyright © 2023· Feel free to cite correctly, but copying whole pages for your website is content theft and will be DCMA'd.
Tagged With: Cheese