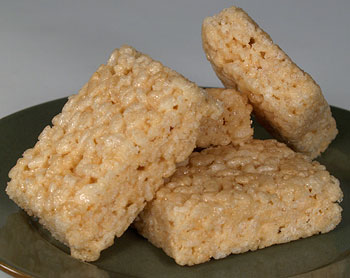 Contents hide
Rice Krispies Squares is a dessert made from Rice Krispies cereal bound together with a mixture of melted butter, melted marshmallows and vanilla flavouring.

The marshmallows are melted with the butter, the vanilla flavouring stirred in, then the Rice Krispies. The mixture is stirred well to combine all and is then turned into a buttered pan, usually square, then let sit. When firm, they are cut into squares. 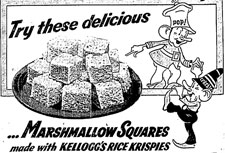 You will read that similar recipes existed already at the time for Puffed Rice and Puffed Wheat. Similar, yes, in that they ended up as sticky squares, but neither recipe used marshmallows, drawing instead on ingredients such as molasses, and neither with the simplicity of Marshmallow Squares.

Rice Krispies cereal came on the market in America on 29th February 1928. 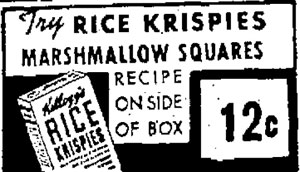 Advertisement for box side recipe in
The Muscatine Journal and News-Tribune.
Muscatine, Iowa. 13 March 1941. Page 8.

Mildred and Malitta invented the recipe in the Kellogg kitchens in Battle Creek, Michigan as a promotional vehicle for the cereal. Reputedly, it took them two weeks to perfect the recipe. [See her obit in Literature & Lore section below.]

The recipe first appeared in newspapers in 1940.

It first appeared on the cereal box in 1941.

The original recipe has never been changed. 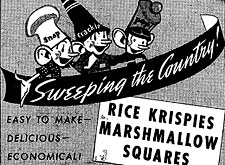 There is much misinformation floating around concerning the circumstances of the recipe’s creation. Much of the disinformation sadly comes from this well-intentioned 1996 excerpt in the The Des Moines Register:

“[Mildred] Day was born in Durham, a village 8 ½ miles east of Knoxville in Marion County [Iowa]. She was a home economics graduate of Iowa State University in Ames. Her family says Day, who worked at Kellogg Co. in Battle Creek, Mich., developed the recipe with Malitta Jensen as a fund-raiser for a Camp Fire Girls group. Anthony Hebron, Kellogg spokesman, says Rice Krispies cereal went on the market in 1928 and Rice Krispies Treats, a trademarked name, were introduced in the 1940s. The recipe first appeared on packaging in 1941. “Many of our employees created concoctions with Kellogg products,” Hebron says.” [1]
The confused assocation with the Campfire Girls likely came about because the recipe uses marshmallows; Campfire was a popular brand at the time. Rice Krispies Treats, the ready-made product, were not introduced until 1995. 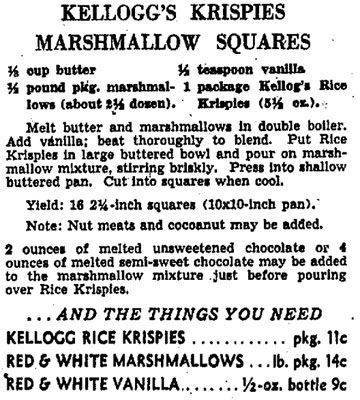 Mildred Day, the culinary genius behind Rice Krispies bars, died a week ago in Bloomington, Minn. She was 92.

Day and Malitta Jensen developed the chewy, gooey finger food—a mixture of Rice Krispies, marshmallows and butter — in the 1920s as a fundraising treat for a Camp Fire Girls group, and to promote the cereal of the Kellogg Co., where she worked after earning a degree in home economics from Iowa State University. [Ed. Some of the info in this para is muddled, and incorrect.]

When her daughter Sandra asked why she never made the snack for her, Day replied, “If you’d made them for two weeks from 6:30 in the morning until 10:30 at night you wouldn’t want to make them again, either.”