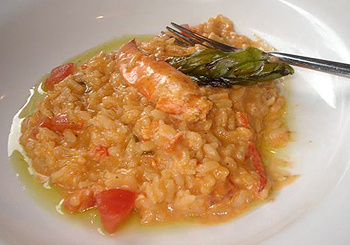 Risotto is a rice dish that is a staple recipe in Northern Italy. It is different from many rice dishes where the rice is cooked separately; in Risotto, all the ingredients are cooked along with the rice, making a risotto a good way to use up leftover ingredients. There are many great recipes, but some of the best Risottos you’ll ever make will be those impromptu ones where you swap this and that based on what is in your fridge. You must use risotto rice, though, or it won’t turn out right.

In Italy, how liquid a risotto is generally depends on the region. In Venice and in areas of the Padania (Po Valley) where rice is grown, risotto is liquidy enough to slide around on your plate. This is called “al onda” or “on the wave.” In Bologna and Piedmont, risotto is firmer, and will hold its form on a plate.

In Italy, risotto is usually served in small portions as a starter to the meal. In the English-speaking world, it has been transformed into the main course (in larger portions.)

Risotto is generally served with a fork — though a thick, soupy Venetian rice dish — risi e bisi — that can look like a risotto at times, is served with a spoon. [1]Baldwin, Eleonora. Risi e Bisi: Venetian bliss. 7 November 2011. Retrieved September 2014 from http://www.aglioolioepeperoncino.com/2011/11/risi-e-bisi-venetian-bliss.html

Never rinse risotto rice before using — the starch on the rice is there for a reason, that’s why you bought that particular kind of rice! It’s needed to make the risotto creamy (though a modern recipes cheat and actually add cream.)

For liquid, you’ll need roughly three times as much liquid than rice (measured in volume). Liquid quantities given in recipes for risotto are always approximate. The amount of liquid actually needed under various conditions, on various days under various phases of the moon, will always differ.

For seafood risottos, it’s usually best to use water. For all other risottos, it’s best to use a “cooking liquid”, meaning anything other than straight water: diluted wine (never just wine), juices, but usually stocks. The stocks shouldn’t be too strong: beef or chicken stock straight from a can, for instance, would overwhelm the dish. It needs to be a mild-tasting stock. However, if you have used up the quantity of cooking liquid specified by your recipe, and more liquid is needed, then, use water.

Let risotto rest for a minute or two before serving. Not that you don’t need that extra minute or two, anyway, to finish up with other things.

Traditional top of the stove, stirring method of cooking risotto
Use a really wide pot or a wide, deep frying pan.

Whatever liquid you use, it always needs to be hot, even just about boiling. Keep it simmering in a pan beside you. Cold liquid will arrest the cooking process and ruin the risotto. In fact, when starting to make a risotto, the very first thing to do is start heating your cooking liquid.

The next thing you do is toast the rice, in some butter or oil along with some flavouring such as onion or garlic. Rice is toasted at the start of making a risotto to develop its flavour. If the rice is toasted quickly, it will stay white. If it is toasted slowly, it will brown and develop a nutty flavour.

You add the liquid a bit at a time, at the very most a quarter of a cup (2 oz / 60 ml) at a time — a soup ladleful is about the right amount — and don’t add more until that has been absorbed. To see if the last addition of liquid has been absorbed, use your spoon to push the risotto aside to expose the bottom of the pan, and see how fast liquid floods it again. You really can’t just dump all the liquid in at once and have done with it.

“There are a few reasons that [risotto] recipes call for adding only a little bit of liquid each time. One is that by slowly adding the broth, the starches stay well distributed and thicken effectively rather than clumping up. Another reason is that batches of rice are not all the same. The starch content, age, and hydration levels depend on the particular batch and its storage conditions. By slowly adding the broth, you have great control over the final texture.” [2]Brenner, Michael; Sörensen, Pia; Weitz, David. Science and Cooking: Physics Meets Food, From Homemade to Haute Cuisine. New York: W. W. Norton & Company. 2020. Kindle Edition. Page 175.

The risotto is done when the rice is tender to the bite, with still a bit of firmness inside it. This should take no more than 20 minutes from when you started adding the liquid. The whole toasting, cooking and stirring process will take about 45 minutes. You need to be at the stove for pretty much all of that time.

Oven baked risotto
Martha Stewart has invented an oven-baked method. You can adapt any risotto recipe to this method.

Heat your stock. Get your oven preheating to about 425 F (220 C). Place an ovenproof dish** on the burner, heat up your oil or butter, and sauté any of the ingredients to be sautéed. Then toast the rice. All this is per usual.

Measure out ⅓ of the liquid the recipe calls for, and set aside for use at the very end. With your ovenproof dish still on the burner heat, stir in a ladleful of the remaining liquid, and stir that until it has been taken up. If the liquid includes wine, then use some of that. Then pour in the rest of the remaining liquid all at once, plus any seasonings, and bring to a boil. Then turn off the burner, stir in any remaining ingredients (except save cheese for the very end of the cooking process), cover the dish, whack it in the oven, and bake until all the liquid has been taken up by the rice — about 25 minutes. Just before the Risotto is ready to come out of the oven, reheat the ⅓ of the liquid that we had set aside almost to a boil — you can zap it in the microwave for a minute. Remove Risotto from the oven. Stir in enough of the remaining liquid to make a creamy consistency, then adjust taste, add any cheese, let rest for a minute or two, and serve.

**Use a dish or pot which you can use both on the stovetop and in the oven, and that has a cover or can be covered, say, with tin foil. (Most CorningWare, for instance, will do: just check the bottom, if it is stovetop safe, it will say so on the bottom.)

You really can’t substitute other kinds of rice, as they won’t have enough starch to develop the risotto.

In the 1500s, when the Duke of Milan was getting married (to the daughter of the King of Naples), the Duke’s Spanish cousin sent 13 bags of seed rice as a wedding present. At least that’s one story (the Spanish part of it is plausible: the Spanish had already been growing rice since at least the 1100s, introduced to it by the Arabs.) Another story has it arriving from China in 1238 and someone just tried growing it and it took off. It was planted in the Po valley (being near to Milan), and it took off owing to the microclimate of the area and the availability of water from the River Po. Some say the irrigation systems were laid out by Leonardo da Vinci; this is probably hyperbole for tour guides to spout, but he certainly designed an irrigation system and watermills for at least one estate at which he was staying.

“I would argue that in a risotto, say, it is not just the grains of stock-saturated rice that are the essence of the dish, but the way in which the limpid stock holds those wet grains together on your fork. (Which is why vegetarian stock never makes quite the perfect risotto, because it lacks the gelatinous quality of chicken stock.)” — Slater, Nigel. Perfect summer pudding. Manchester, England: The Guardian. 5 August 2001.

The plural of risotto is actually risotti in Italian, but in English you’re better off to just say “risottos”.

This web site generates income from affiliated links and ads at no cost to you to fund continued research · Information on this site is Copyright © 2022· Feel free to cite correctly, but copying whole pages for your website is content theft and will be DCMA'd.
Tagged With: Italian Food, Rice, Risotto