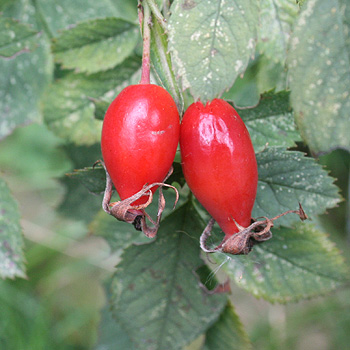 Rose Hips are the fruit that the rose plant produces.

Botanically, roses are related to apple trees. So, if you will, the “hip” is the apple that the rose bush produces.

Rose hips are round, and about the size of a cherry (at least, the ones that most people consider worth bothering with are.) When young, the hips are green and hard. As they ripen, they soften and change colour to red or orange.

Rose hips can be used as a fruit.

They have a very tangy, tart flavour, just as cranberries do. They can be used for making syrup, jams or jellies from. Jellies are a better idea than jam, because with a jelly you get to strain out all the seeds, which are very bitter. To make a jelly from them, you can cook them down, strain them, then use the puréed sauce to make the jelly from.

Syrup made from rose hips ends up being staggeringly high in Vitamin C. The syrup can be used as a drink, mixed into water, or as a dessert sauce. Children were given rose hip syrup during World War Two to supplement their diets.

For roses to produce hips, you have to stop deadheading the flowers in August. Don’t use hips from roses that have been sprayed or dusted. If any pesticide was used, it must have been labelled as safe for food.

Though hips produced by any rose plant can be used, some varieties of roses produce better hips for culinary use than others. Some produce hips that have no taste to speak of worth bothering about, and some produce hips so small they aren’t worth all the fiddling. Many people suggest that rose hips from the “Rosa rugosa” varieties are the best, as the plants will produce the tastiest rose hips, and in abundance. Other varieties that often get mentioned as being good or acceptable include Rosa ponifera, Rosa canina, Rosa eglantaria and Rosa californica.

Rose hips are ready to pick when they yield to a bit of a squeeze with your fingers. After the first frost, they will get brighter in colour, and be softer still. The best flavour comes after a nip of frost. Don’t leave them too long or they will start to dry and wrinkle.

Discard any squidgy ones; any that have become wrinkled are starting to dry out and are past it, unless of course you are planning to dry them out anyway for storage. The rule of thumb is, the bigger the better — very small ones can be all seeds and no pulp. You need a lot of hips to do anything with.

Wash the hips, and trim off both ends.

When you cut them in half, you will see hairs and seeds in the middle. If you aren’t planning to do something that involves straining them, you have to remove the hair and the seeds. Deseeding them and dehairing them is really not worth the bother. The hairs can be quite a skin irritant if they work their way into your fingers; in fact, the hairs used to be used as a base for itching powders, homemade and otherwise. Your hands will feel very itchy after cleaning them. If eaten, they can also irritate the stomach.

For this reason, most people recommend making from them something like jelly or syrup, which you can just boil and strain.

Rose hips can be dried whole, and used to make a tisane with. To make a tisane, boil dried rose hips in water for about 10 minutes. Allow 2 tablespoon per 2 cups / 1 pint of water / 500 ml. While being boiled, the hips will swell and split, letting the water get at the flavour inside. Just pouring boiling water over them won’t do the trick; you won’t get any taste. Strain well — remember what the irritating hairs would feel like inside you.

After making tea with the rose hips, you can still use them for other things, such as pressing through a sieve for a jelly or sauce.

You might wonder how rose hip syrup could be rich in Vitamin C, because we were all taught that boiling vegetables or fruit destroys the Vitamin C in them. That’s a very simplistic answer, though.

You can dry rose hips whole, or cut and clean and then dry.

During World War II, both the American and British governments promoted rose hip as an easy and accessible source of Vitamin C.

In 1941, the British Ministry of Health organized a scheme for volunteers as part of the War Effort to gather rose hips to make syrup from. The Ministry got children to volunteer as well. Children were granted days off school in the fall to go rose hip hunting in the hedgerows. The Ministry of Food also published recipes.

This web site generates income from affiliated links and ads at no cost to you to fund continued research · Information on this site is Copyright © 2023· Feel free to cite correctly, but copying whole pages for your website is content theft and will be DCMA'd.
Tagged With: British Food, British Wartime Food