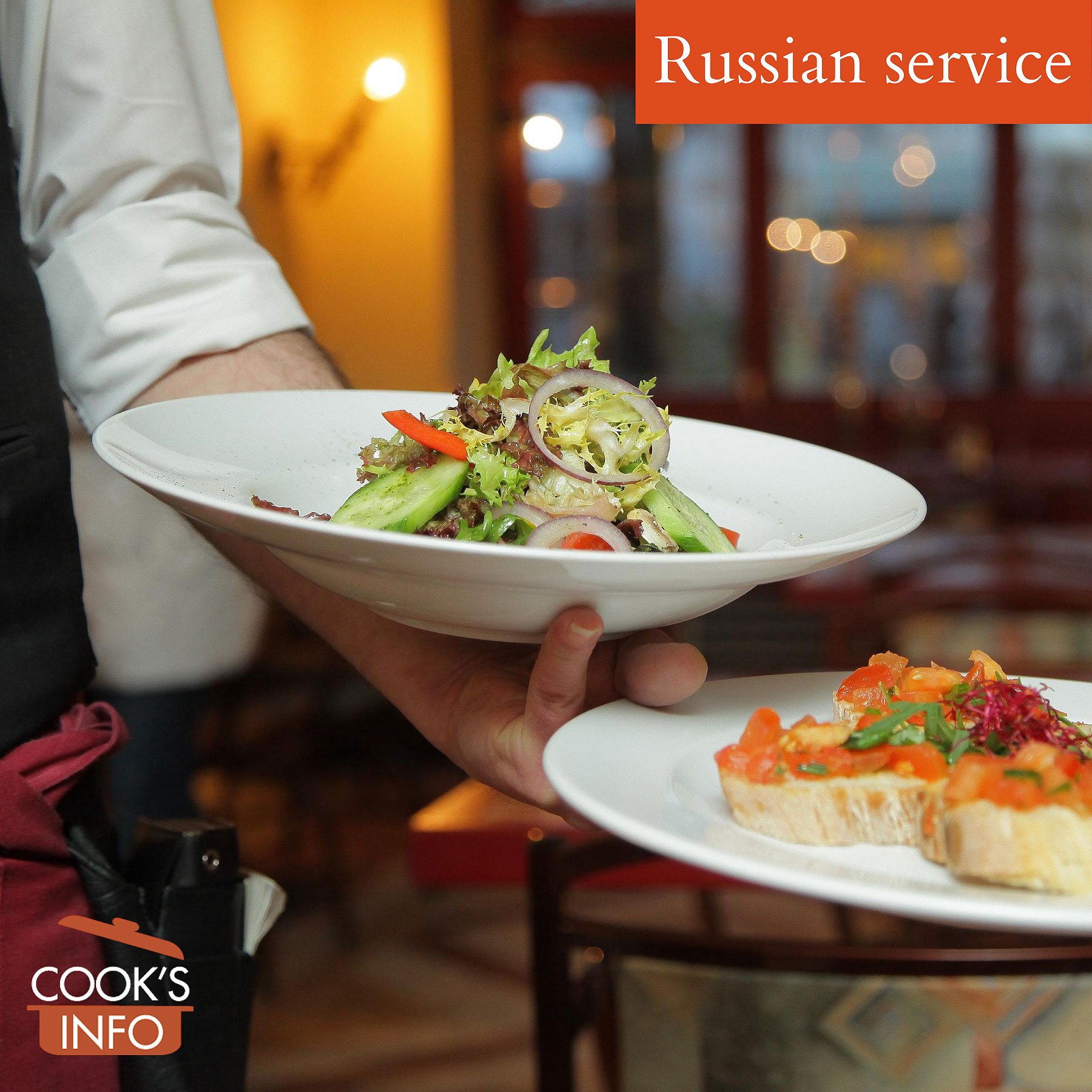 Russian service is a form of table service.

Russians have been known for revolutions from time to time, and they also caused a revolution in the dining room in terms of how food was served. In Russian service, diners are served their food already dished out for them on plates. This was a huge change when the practice arrived in Western Europe in the early 1800s.

In the classic, “old” French way (1600s to mid-1800s), as well as English service, all the dishes for a particular course were put on the table in dishes, and you helped yourself, taking what interested you (if you could get to it.) Carving was done at the table, and hot dishes would frequently get cold, especially if they were out of reach on the other side of a crowded table.

In Russian service, the food is sent out of the kitchen piping hot when the time is right for it, and offered to diners by waiters, serving from a diner’s left side. Meats are sent out of the kitchen already carved on platters. This innovation reduced crowding on tables, and gave the chef more control, so that the dishes he meant to be experienced hot would be.

“The service à la russe, popularized by Urban Dubois round about 1860, is less rich, less representative and expressive of luxury, but it has the advantage of meeting in full the imperious demands of the table to “serve hot”. The fundamental rule of this service is that everything should be organized in advance to this end… In service à la russe everything can be served piping hot if whoever is in charge of the kitchen can calculate from the time for which the meal is fixed the moment which he must begin to dish up, working out for this purpose the time taken in cooking and the exact instant at which the food must be presented to the guests.” [1]Montagné, Prosper. New Larousse Gastronomique. Paris: Librarie Larousse. English edition 1977. Page 838.

“It was Prince Alexander Borisovitch Kourakine, the tsar’s ambassador to Paris during the Second Empire [Ed: Emperor Napoleon III, 1852 – 1870], who introduced service à la russe into high society, from where it spread through the catering world. For the grand dinners he gave at the embassy he launched a new form of service, which Urbain Dubois popularized around 1880 [Ed: sic, Larousse revised the date from 1860 to 1880] and introduced to middle-class homes… The aim was to eat hot dishes as hot as possible; instead of leaving guests to choose from a variety of dishes, the order was arranged in advance and the dishes presented one after the other…. It was easier to serve dishes hot, as a set time for the meal allowed the chef to calculate cooking times accordingly. In service à la russe the guests are divided into groups of 8, 10, or 12, each of which is served by a maître d’hôtel who is instructed in advance which guests to serve first…” [2]Lang, Jennifer Harvey, ed. Larousse Gastronomique. New York: Crown Publishers. English edition 1988. Page 968.

“This new style of table service provided for dishes being served to guests at their seats by servants who handed them round. It therefore required more servants. There was also the need for table decorations to take up the spaces which the dishes themselves would have occupied under the old system.

Valerie Mars (1994) has drawn attention to the difficulty in discerning when the new system was first introduced and to the considerable controversy which it brought about in aristocratic or plutocratic circles in England, where some opposition and incomprehension persisted until almost the end of the century. She observes that Mrs Beeton (1861) ‘advised against dinners à la russe in households without sufficient resources’, i.e. the sort of household for whose mistresses she was writing.” [3]Davidson, Alan. The Penguin Companion to Food. London: The Penguin Group, 2002. Page 855

“With considerable curiosity, mingled with amusement, I have perused your account of Mr. de Fytchett’s state banquet. So it was a dîner à la Russe, was it? The Pagodians have become inoculated with the idea promulgated some months since in the columns of the Times, by a mysterious epicurean, concealing himself beneath three initials, and dating from the ineffable regions of Berkeley Square. I spoke of the dinner to several of my acquaintances here before I showed them your letter, and received all sorts of explanations and conjectures concerning a Russian dinner. Lampkin, in his meek way, surmised that it consisted mainly of caviare, and quoted some lines from Shakspeare, either about the “Rugged Russian bear,” or something being “caviar to the general” — I don’t remember which. Old General Gargall rudely expressed it as his opinion that you had nothing to eat but tallow candles and train oil; and told horrible, and I hope mendacious stories, about the way the Cossacks emptied the street-lamps and plundered the tallow-chandlers’ shops during the foreign occupation of Paris, in 1815. Several old ladies maintained that at Russian dinners the gentlemen all got tipsy with “quass,” and knouted [sic] their wives all round when the dessert came. Another party stated the bill of fare to consist of bears’ hams, bear’s-cub steaks, stewed bears’ feet, bear’s-tail soup, dried reindeers’ tongues, potted wolf, fir-cones and oil, raw turnips sliced in brandy, with plenty of ice between the courses. Fortunately we have had, on a visit to the head-master of the Grammar School here, a very well-informed, gentlemanly person of a certain age, a Mr. Nedwards. He has a long, tawny moustache, which he twists constantly, and is very fond of humming airs from the operas. He has endeavoured to make me like Signor Verdi; he plays selections from his works very prettily on the piano; and has almost succeeded. He resided a long time in Russia, whither, I believe, he was sent on a diplomatic mission. Mr. Nedwards is very fond of the Russians, and of dîners à la Russe. Doctor Gradus, of the Grammar School, says that he is one of the most estimable of persons, and that he has every chance of being made a Commissioner some day. His political views are strictly conservative; and I believe he writes articles for nothing in the Saturday Review. But he is not a professional literary man: O dear, no!-and, in fact, my Louisa, if you were not already— but I digress. The only fault I have to find with Mr. Nedwards, who is otherwise charmant, is that he has a habit of coming very late when he is asked to dinner.

According to Mr. N., a dîner à la Russe is the acmé and perfection of the European cuisine. There is, perhaps, just a sufficient suspicion of orientalism about it to give it a picturesque character; otherwise, it is a scientific combination of all the best characteristics of French and Russian cookery. The first, you know, my darling, from experience and from report. The second comprises those elaborate, ingenious, and highly civilised dishes, called Stchi – you should only try to pronounce the word when you are labouring under a severe attack of influenza — which Stchi is a reeking cabbage soup with the yolks of eggs and square blocks of fresh boiled beef floating in it. Then there is Batwinia, a soup made of fish, ice, oil, and half-fermented beer, or qvas. There are pirogues, too, or hot meat pies, which you eat with your fingers. There are certain exquisite Russian fish, such as sterlet and sassina, which can’t be obtained in England — not even through the instrumentality of Morell, or Fortnum and Mason; and when all these good things of the old Muscovite kitchen are mingled with the elegancies of Verrey’s, and the Trois Frères Provençaux, as is invariably the case at the genteel tables of St. Petersburg and Moscow; when, added to your cabbage soup, and fish, and ice, you have the salmis and soufflés of dear Paris; the compotes, and suprêmes, and mayonnaises, moistened by the exquisite wines of Bordeaux and Burgundy, and the best Cliquot or Ruinart’s champagne; when you are served in comfort, cleanliness, and eloquence, by silent and attentive servants, and are saved the trouble of carving or helping your neighbours, you have the broad idea of a dîner a la Russe…” — Sala, George Augustus. Lady Chesterfield’s Letters to Her Daughter. London: Houlston and Wright. 1860. Pp 95-96.