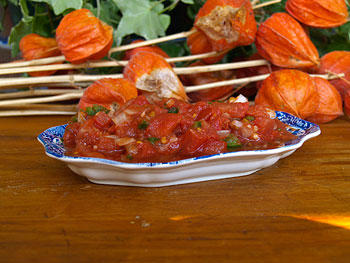 Salsa means sauce, in Spanish. Though the Spanish do make sauces, generally when you see the word Salsa there will be a Mexican sauce involved. There are raw sauces and cooked sauces. If you see the word “cruda” in the name of a Salsa recipe, “cruda” means “raw” in Spanish.

You can buy commercially prepared Salsas, sold in cans or jars. For people who don’t know Salsa from schmalsa, it’s perfectly fine. And what else would you use in that party nacho dip made of layers of sour cream and red Salsa? You’re going to knock yourself out making a gorgeous Salsa for that?

Purists say that a Salsa ain’t a Salsa if it ain’t been made with the ancient Mexican version of a mortar and pestle (called a molcajete and tejolote and made out of basalt.) Do they really think ancient Mexican housewives wouldn’t have given their right arm for a Cuisinart? Just point out that they’re getting a homemade salsa, and tell them not to push their luck.

There can’t be much else healthier for you than fresh, uncooked Salsas, and even men love them. An arrangement of raw veg crudités is about as interesting to a man as is a scented candle. But whiz that all up into something flavourful, tell them it’s a sauce, and they’re all over it, ladling it on. 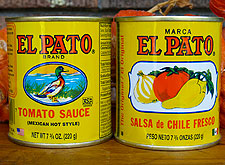 That being said, good luck trying to get a kid to eat a fresh Salsa. There’s nothing wrong with their eye sight; they will spot the “bits” in it a mile away. So, what you do is make it spicy, forbid the kid from having any as s/he is too young, emphasize that it’s for grown-ups as it is way too hot for someone their age and be really adamant about the “too young” part. Let the “am not too young” pleading continue for a while — you might as well enjoy it, and you have to give a convincing performance, anyway — then make a great show of reluctantly giving in, and just as their first bite is going in, say already “see, I told you it was too hot for you.” They will make a great show of being totally fine with it and eat some more to show you just how wrong you were about the whole thing.

Mexican Salsas are really no trouble to make, especially as about half of them you don’t even cook. There only two minor hassles about them. The first is the chopping. They are pretty chopping intensive, as the ingredients need to be chopped finely. No hunks allowed; this is a sauce, not a stir fry. But a food processor, if you have one, can save you some work. Secondly, many Salsas do require fresh cilantro. That’s not really a problem though, as you’ll likely going to have to make a trip out for the tomatoes, onions, garlic, anyway, and as for all the leftover cilantro, if you’re making a Salsa, chances are you’re making other dishes requiring cilantro too — and if not, use the “freezing herbs in ice cube tray” trick.

The Franciscan priest Bernardino de Sahagún (1499 – 1590), in his “Historia General De Las Cosas De La Nueva España”, mentioned a sauce for sale in the markets made from tomatoes, red and green chiles, and pumpkin seeds. The sauce was used as a condiment with venison, turkey, fish and seafood such as lobster. In 1571, the Franciscan priest

This web site generates income from affiliated links and ads at no cost to you to fund continued research · Information on this site is Copyright © 2023· Feel free to cite correctly, but copying whole pages for your website is content theft and will be DCMA'd.
Tagged With: Mexican Food, Mexican Sauces, Spanish Food