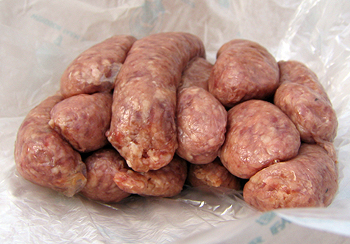 A sausage is a “tube” of meat. The outside of the tube, the wrapper, is usually called the “casing”; it can be a natural item such as an animal intestine, or it can be artificial. It is almost always edible. The wrapping holds inside it a mixture of meat, usually finely but sometimes more coarsely minced or ground, that is spiced in varying degrees, and may have some cereal mixed in with it. The mixture almost always holds some fat as well to help bind it and give it mouth feel. The meat can be presumed to be pork unless otherwise specified.

In the English-speaking world, Sausages got a bad rap towards the end of the 1900s.

First, the thinking went, Sausages were a cheap meat that has always been for poor people. Secondly, they were bad for you, full of fat and other nasty things. And thirdly, the only ones that were worth considering had Italian or German names.

In the last two decades of the 1900s, there were some cheap and nasty Sausages made when industrial Sausage makers ratcheted up the fat content to save money beyond the golden rule for Sausage of “half lean half fat meat.” North American Sausages were reduced to small, thin, anaemic, breakfast Sausages in supermarkets from the 1950s through to the 1990s. These are the Sausages which gave all others a bad rap. You’ll still hear vegetarians say veggie breakfast Sausages are just as good, “considering there’s no ‘real meat’ in the meat ones, anyway.”

In their haste to recover from the bad reputation brought on by those who pumped out low-quality Sausages for the past few decades, Sausage makers may in fact have overcompensated and cut back too much on the golden rule of thumb — “half fat, half lean.” Sausages don’t produce enough of their own fat these days to fry up; some will sit in the frying pan and dry and shrivel before your eyes. When frying up Sausages these days, until you get to know them, fry them up in a knob or two of butter. This is where most North Americans will faint — frying something fatty in butter? But that’s just the point — the fat has been reduced to the point where you have to add it back for the Sausages to cook without drying up entirely and sticking to the pan.

Consumers in North America and in the UK came to consider that only European-made or European-style Sausages were worth buying. Good English-named Sausages are now being made again, though mostly only in the UK where traditional styles and quality have been revived. North Americans wandering into the meat section of any supermarket in the UK look and weep.

There are a surprising number of websites dedicated to home Sausage making. These websites talk about making quality Sausages so you know what’s in them. The websites show that poor old Sausage’s bad reputation is still hanging around.

Sausages can be fresh, cured or cooked. Fresh Sausages, of a Northern European tradition, need cooking. Most of these are intended to be eaten whole rather than as a sliced delicatessen meat.

Cured Sausages tend to be made in hotter climates to preserve the meat. They will be air-dried and/or smoked, and have saltpetre and / or lots of salt. Some cured Sausages can be eaten as they are; others need cooking. Many are intended to be sliced and used in pieces rather than eaten whole.

The cooked category of Sausages includes partly-cooked ones. Cooked Sausages are often par-boiled before sale, and sometimes are smoked as well. Many German Sausages are cooked, intended to be reheated before serving. Some such as Leberwurst are used as a meat spread.

When cooking a Sausage, never prick it — juices will flow out and make the Sausage dry inside. Instead, use tongs, or a “flipper”. The habit of pricking them during cooking stems from wartime cooking, when Sausages were full of fat, and you wanted to let all the fat run out before they practically exploded, splattering your nice new café curtains in the kitchen. Nowadays, most Sausages are better quality.

To keep thick Sausages moist, you can steam them in a bit of water in the frying pan so that the meat cooks inside without overbrowning the outside. The Sausages should be finished by a browning without the water. Pot Stickers use the same technique.

In 2011, the British Consensus Action on Salt and Health (Cash) said that only 7 out of 246 meat sausages they examined contained less salt than a bag of chips. [Ed: the baseline they used was a 34g Walker’s bag of plain crisps, containing .5 g salt) [1]Poulter, Sean. British bangers have more salt than a bag of crisps, as health experts call for a change in recipes. London: Daily Mail. 17 June 2011.

To choose healthier meat sausages when purchasing, check that the ingredient list shows a minimum of 80% meat — more is better. Check the ingredient list for fillers: fewer is better. Fillers include wheat, rice, pea fibre and soy. On the nutrition panel, look for less than 8 g fat per 100 g, and 1.3 g of salt or less per 100 g. [2]A closer look at sausages. In: BBC Good Food. Healthy Cooking Made Easy with BBC Good Food. Micro course. Step 4.17. Accessed August 2021 at https://www.futurelearn.com/courses/healthy-cooking-made-easy-with-bbc-good-food/2/steps/1224921

“You can find plant-based sausages made with a variety of ingredients such as beans, nuts, soy, seitan (wheat gluten), quorn (mycoprotein) and even pea protein. As with meat sausages, it is important to read the ingredients list and try to choose a sausage with the simplest ingredients and least additives. Avoid sausages that use a lot of ‘filler’ ingredients like breadcrumbs or potato, instead you want to see items like beans, nuts, tofu etc. in the ingredients list and at least 5-8g of protein per sausage.” [3]A closer look at sausages. In: BBC Good Food. Healthy Cooking Made Easy with BBC Good Food.

Sausages are nothing new. Sausages were a way of both using up less-desirable meats, and of preserving them.

The earliest extant mention of them in text appears to be from 3,000 years ago in the Odyssey by Homer, though in the Homeric texts the sausage referred to is one big one, like today’s haggis [4]referred to in some translations as “paunch”, example Odyssey XX, ll. 25-35.

The Greeks and Romans ate sausages; the early Christians even banned them owing to their sexual suggestiveness.

Historically, the poor didn’t even have access to meat, let alone sausage, seasoned as it was with spices such as pepper and cardamom that used to cost a king’s ransom up until the 1900s.

The Romans called sausage “salsicia” (from their word, “salsus”, meaning “salted”), and mixed pork with pine nuts, cumin seeds, bay leaves and black pepper, and their beloved liquamen. They brought sausage making to Britain, and even though the English forgot how to do central heating, they remembered how to make Sausage.

Though sausages would certainly be made at home, by the 900s butchers were also selling them ready-made. Guilds in various towns would create their own recipes for their members to use, and thus regional sausages were born.

Sausages haven’t historically always been cased up in links. In fact, you were more likely to make, or be able to get, loose sausage meat (the situation is reversed, now.) The meat would be minced, spiced and salted, packed into ceramic pots, pressed down and sealed with a layer of melted fat. Sounds awfully close to something French, doesn’t it? A cloth dipped in wax would then be tied around the mouth of the pot, and it would be stored in the cellar for months, being used as needed.

Links had the advantage that they could be cured (in smoke), which better prevented spoilage.

In 2011, David Harding in England underwent counselling to break his addiction to sausages. He was eating up to 13 a day. His favourite were McWhinney’s Irish pork sausages. [5]Help me battle my SAUSAGE ADDICTION! Accountant forced to have counselling to get him off the bangers. London: Daily Mail. 26 May 2011.

The word “sausages” comes from the Latin “salsus”, meaning salted.

During World War One, there was a meat shortage in England, causing sausage makers to add a bit more water to sausages to plump them up. This caused sausages to be more likely to explode out of their casings when fried up — and the British term for sausages, “bangers”, was born. [7]Fryer, Jane. Why ARE sausages called bangers? And what on earth’s Caesar got to do with salad? The fascinating origins of our favourite dishes. London: Daily Mail. 6 September 2010.

This web site generates income from affiliated links and ads at no cost to you to fund continued research · Information on this site is Copyright © 2022· Feel free to cite correctly, but copying whole pages for your website is content theft and will be DCMA'd.
Tagged With: Ancient Greece, Beef, Breakfast, Pork