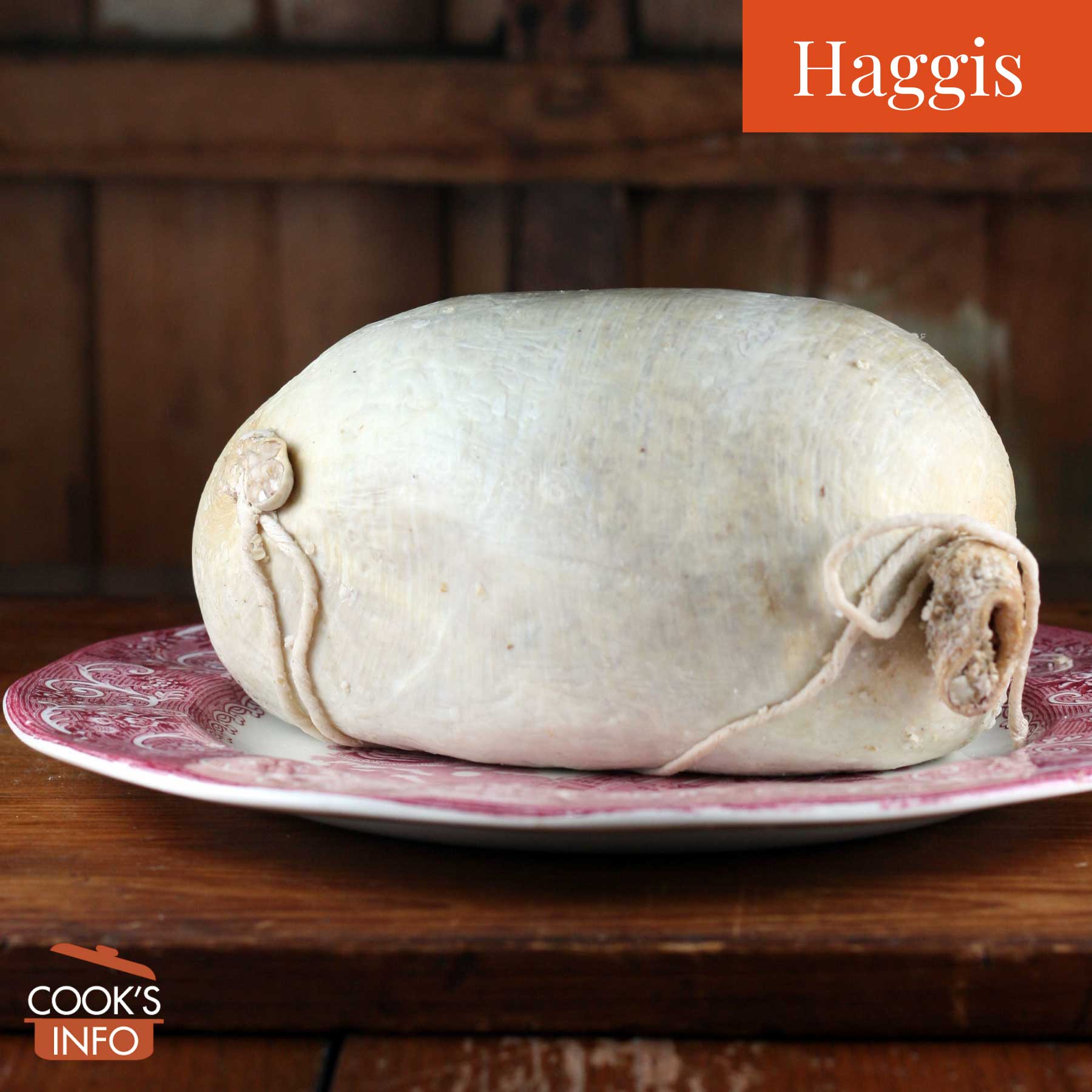 Haggis is a Scottish dish that is like a large rounded sausage, or a large steamed pudding, with a sheep’s stomach used as the wrapper for the stuffing inside.

Haggis is stuffed with minced offal, bound together with oats, beef suet and a liquid, and flavoured with onions and spices. Oats are about 90% of the mixture.

The combination of offal used varies by recipe (heart, liver, lungs, etc.) The animal it is from can be beef, lamb, or game. The liquid can be stock, gravy, red wine, etc. Using beef suet instead of mutton fat is a modern practice.

This mixture is then stuffed into a sheep’s stomach. The stomach used to be sealed with wooden skewers; now it is sewn up with a needle and thread.

You can buy haggis ready to go at some butchers now and supermarkets now. Modern ones might use artificial casings made of collagen instead of sheep’s stomach as a wrapper. 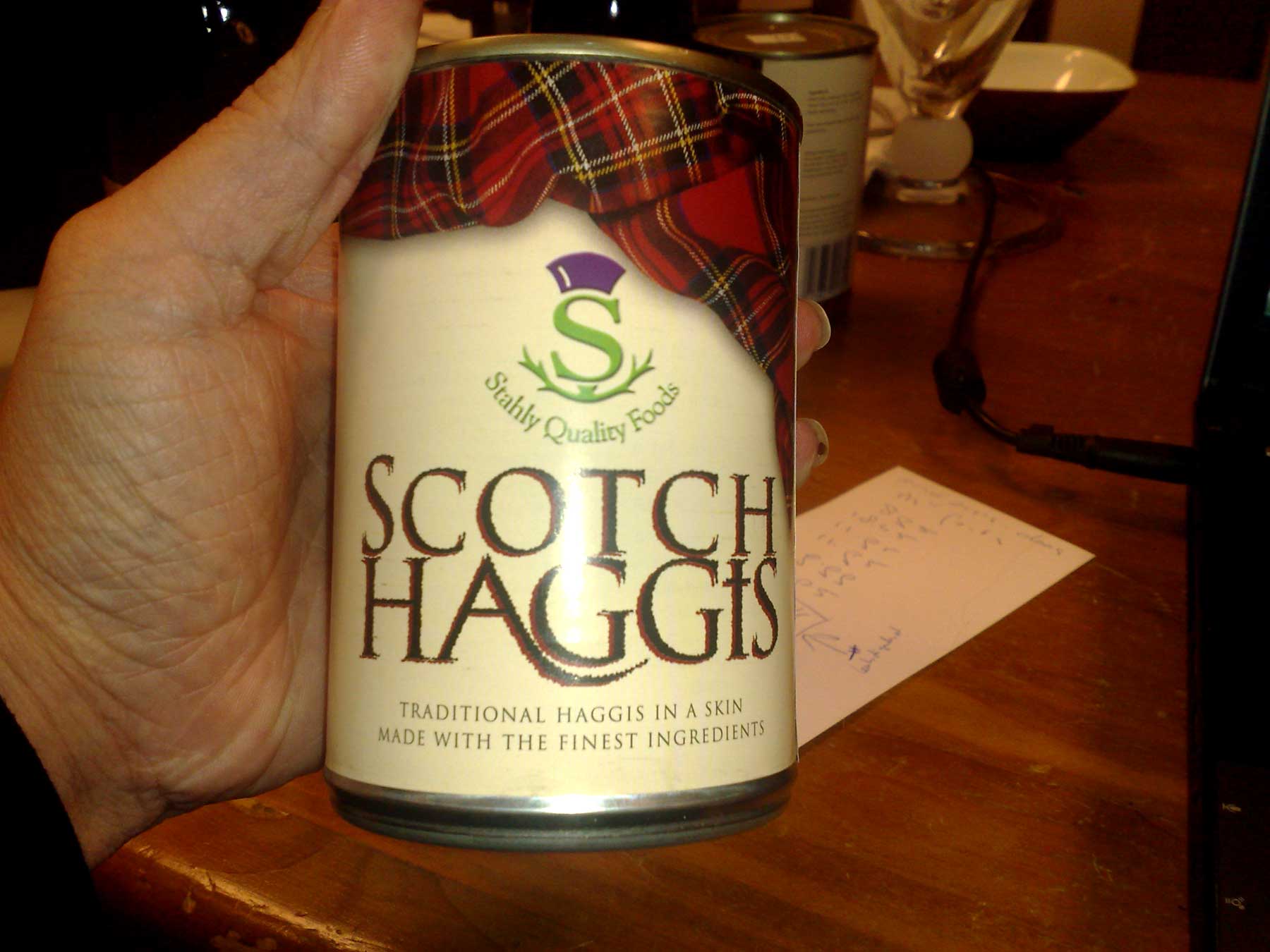 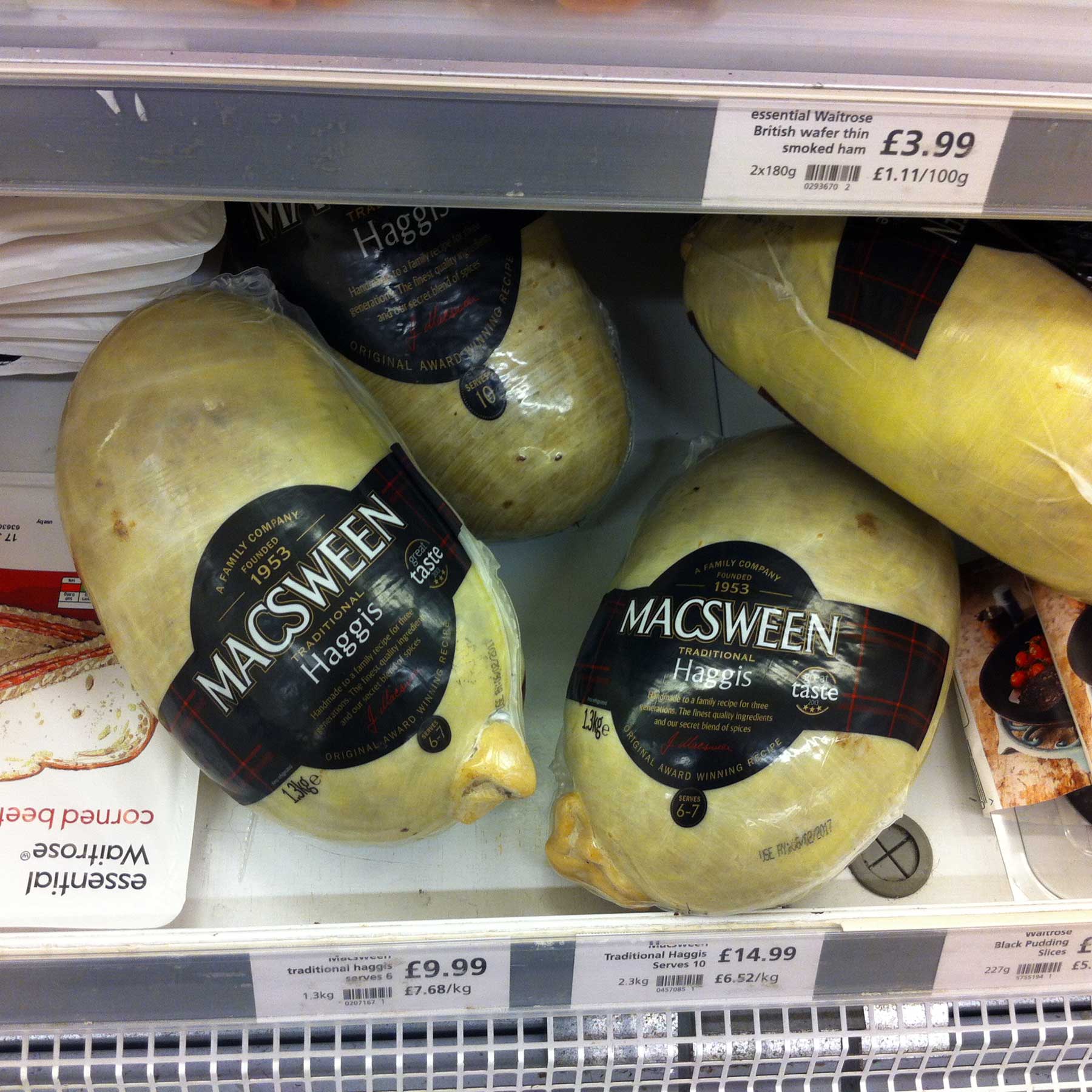 Haggis is simmered for about three hours.

The stomach linings can occasionally burst during the simmering if too much water is absorbed by the filling, causing it to swell. To help avoid this, it can be pricked with a needle during cooking to help relieve internal pressure.

It is served in slices, usually as a main course, with potatoes and mashed turnips. 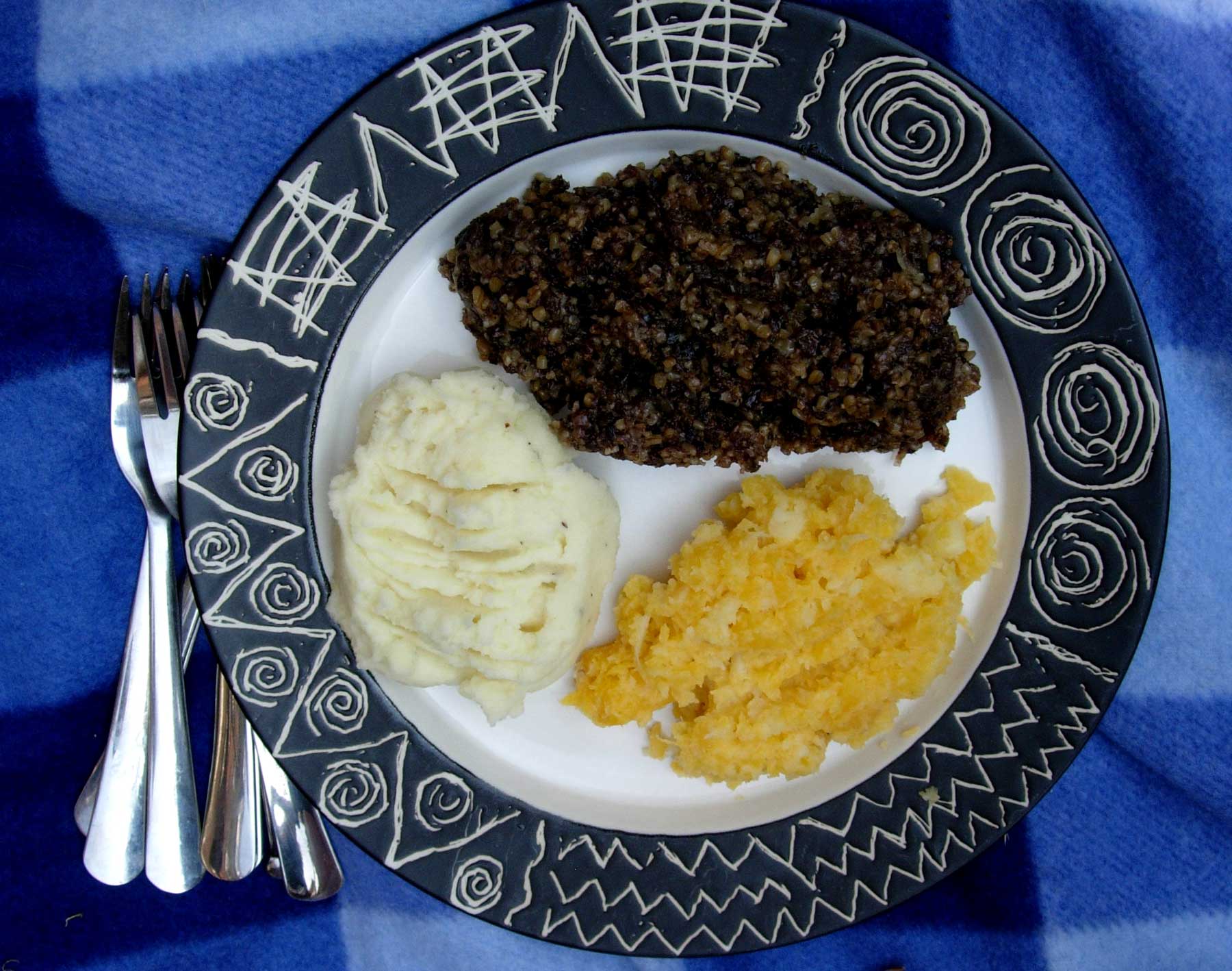 It is served particularly on Robbie Burns Day (25th January) and St Andrew’s Day (30th November.) Some restaurants in Scotland now serve small slices as an appetizer.In fish and chip shops in Scotland, you can get a slice of haggis, battered and deep-fried.

When cold, haggis gets very solid.

The import of Scottish-made haggis into the United States was  banned in 1971 owing to the sheep’s lung component which is seen as a health risk. [1]”Back in 1971, the USDA banned the sale of sheep’s lung—a key ingredient that makes up about an eighth of the dish.” Pomranz, Mike. Will Brexit Bring Haggis Back to America? Food and Wine Magazine. 4 August 2020. Accessed December 2020 at https://www.foodandwine.com/news/brexit-united-states-scotland-haggis-import-trade [2]”Scottish haggis imports have been prohibited since 1971, due to the U.S. Department of Agriculture ruling that “livestock lungs shall not be saved for use as human food.” Ok, so why are lungs banned, while the stomach, heart, liver, and all that other stuff are considered ok?  According to Edward R. Blonz, Ph.D., a nutritional expert who sits on the board of the University of California’s Berkeley Wellness, sheep’s lungs can contain fluid from the stomach — fluid he calls ‘microbial-rich gunk.’ So it’s kind of a food safety risk.” Scanto, Maria. The real reason Scottish haggis is banned in the U.S. 27 March 2020. Accessed December 2020 at https://www.mashed.com/197299/the-real-reason-scottish-haggis-is-banned-in-the-u-s

The import of haggis into Canada was also banned in 1971, for the same reason as the U.S. did — the presence of lung.

In 1989, both the US and Canada also banned any British red meat period (including sheep and lamb), owing to the BSE outbreak in the UK. [3]”The US has banned the import of British beef and lamb since 1989 after the first outbreak of the neurodegenerative disease BSE.” Gayle, Damien. British lamb may go back on sale in US early next year. Manchester, England: The Guardian. 27 July 2016. Accessed December 2020 at https://www.theguardian.com/lifeandstyle/2016/jul/27/british-lamb-may-go-back-on-sale-in-us-early-2017

In 2017, the Macsween Company in Scotland formulated a special recipe haggis that uses sheep heart instead of lung. That, in combination with the lift of the red meat ban in 2015, allowed it to begin exporting this modified product to Canada. [4]”Macsween of Edinburgh was forced to circumvent this regulation by making their Canadian haggis with sheep heart, rather than sheep lung. The company also needed to have their facilities approved by the Canadian Food Inspection Agency.” Hopper, Tristin. The offal truth: Haggis returns to Canada — but the Canadian government made sure it won’t be authentic. Toronto: Canada. 20 October 2017. Accessed December 2020 at https://nationalpost.com/life/food/the-offal-outrage-why-ottawa-wont-let-you-eat-authentic-scottish-haggis

The modified lunge-free product is not allowed into the US, however, as of 2020, owing to the continued US ban on British red meat.

In some ways, a haggis is an original version of a steamed pudding. Steamed puddings were enclosed at first in intestines. At the start of the 1600s, cloth came to be used as a wrapping, then the Victorian era put them in pudding dishes as we still do now.

Most food researchers have concluded that haggis is actually not particularly Scottish in origin.

It is like one big sausage, using animal intestines (in this case the largest, the stomach) as a food wrapper and the cheapest cuts of meat to stuff it with, has been a common practice throughout history in order not to waste any food.

“The Scottish haggis may be an entirely indigenous invention, but in the absence of written records there is no way of knowing; it could be an adaptation of a Roman recipe to the local mutton and oats.” [5]Davidson, Alan. The Penguin Companion to Food. London: The Penguin Group, 2002. Page 436.

“Taken to be a distinctly Scottish dish from the 1750s onwards, the haggis can be shown to have an interesting derivation and the ‘evidence’ is cast across several different areas. It was extolled as an English dish by Gervaise Marcham in 1651.” [6]Harrison, Alan. The Gastronomy of Haggis and Kail. Nutrition and Food Science Journal. No. 89, July/August 1984.

“Whatever its origin and distressing though it may be to patriotic Scots, the word, like the dish, is definitely English.” [7]Edwards, Gillian Mary. Hogmanay and Tiffany: the Names of Feasts and Fasts, London: Geoffrey Bles. 1970. Page 53.

In the West Country of England, in Wales and in Ireland, similar dishes are made — a filling of heart, liver, lungs and a grain. They use sausage casings or cauls instead though as the wrapper.

In Russia, there is a dish called “nyanya” or “niania” (meaning “nursemaid.”) It is described in Dead Souls by Gogol as a “well known delicacy that consists of sheep’s stomach stuffed with sheep’s brains, sheep’s trotters and buckwheat.” It is served with cabbage soup.

“My dear,” said Sobakevitch, “the cabbage soup is excellent.” With that he finished his portion, and helped himself to a generous measure of niania — the dish which follows shtchi and consists of a sheep’s stomach stuffed with black porridge, brains, and other things. “What niania this is!” he added to Chichikov. “Never would you get such stuff in a town, where one is given the devil knows what.”

“Yes, but do you know what all the stuff is MADE OF?” retorted Sobakevitch. “If you DID know you would never touch it.”
— from Dead Souls by Nikolai Gogol 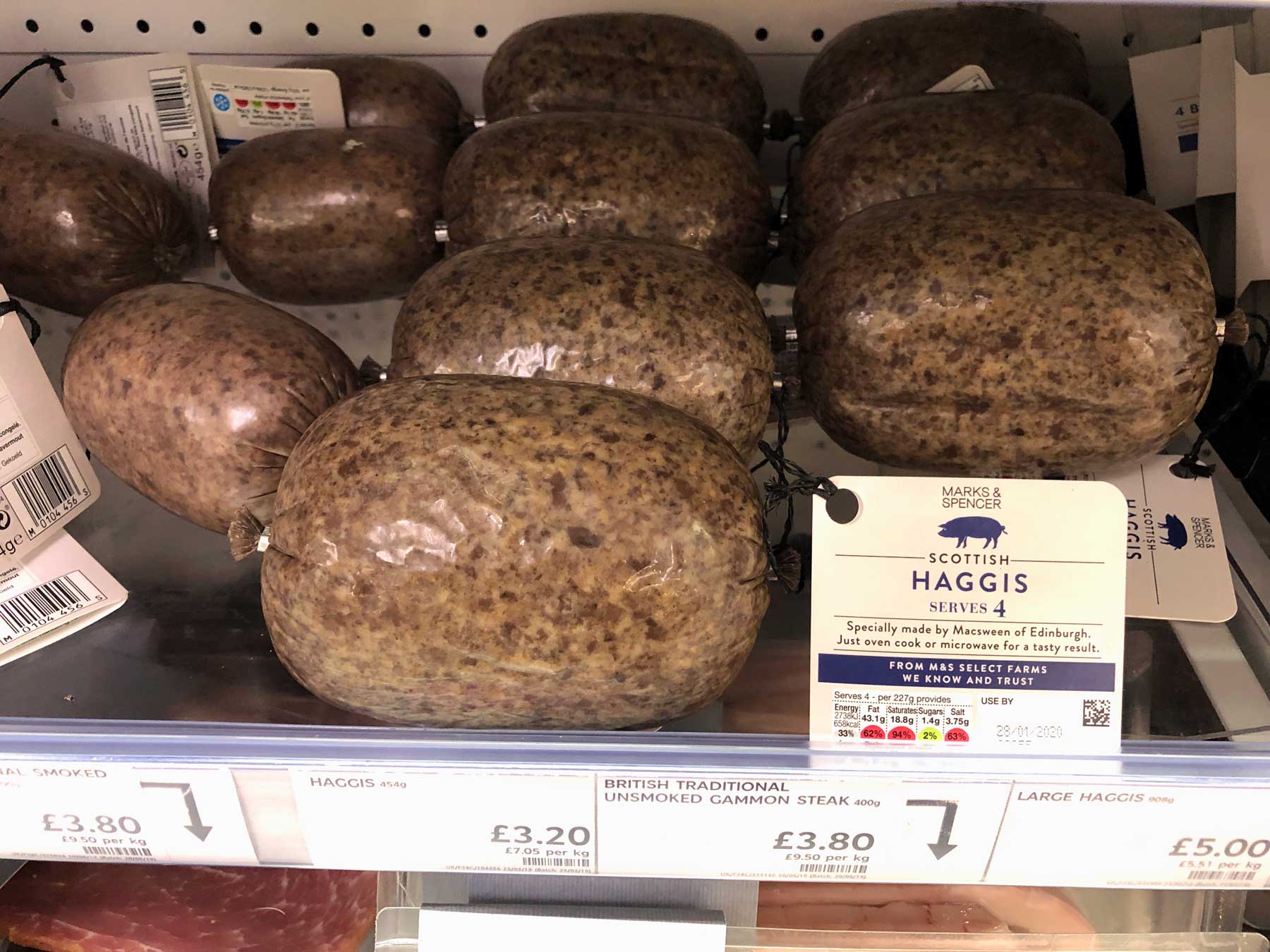 Fresh haggis in assorted sizes at Marks and Spencers. © CooksInfo / 2020

“They served haggis at the last dinner I attended. I didn’t know whether to kick it or eat it. Having eaten it, I wished I’d have kicked it.” — Stuart Turner

“The fact that I am not a haggis addict is probably due to my having read Shakespeare. It is the same with many Englishmen. There is no doubt that Shakespeare has rather put us off the stuff… You remember the passage to which I refer? Macbeth happens upon the three witches while they are preparing the evening meal. They are dropping things into the cauldron and chanting ‘Eye of newt and toe of frog, wool of bat and tongue of dog,’ and so on, and he immediately recognises the recipe. ‘How now, you secret, black and midnight haggis,’ he cries shuddering.” — P.G. Wodehouse (1881-1975)

“The Haggis is a dish not more remarkable or more disgusting to the palate, than in appearance. When I first cast my eye on it, I thought it resembled a bullock’s paunch, which you often meet in the streets of London in a wheel-barrow; and, on a nearer inspection, I found it really to be the stomach of a sheep, stuffed till it was as full as a football. An incision being made in the side of it, the entrails burst forth, and presented such a display of oatmeal, and sheep’s liver, and lights, with a moseta that accompanied them, that I could scarcely help thinking myself in the Grotto del Cane. As I mentioned, my politeness got the better of my delicacy, and I was prevailed on to take it; but I could go no farther: and, after a few encomiums on its being tender and savory, which I thought sufficient to show that I was not wholly destitute of Taste, I turned a hungry face towards a large tureene in the middle, which the master of the feast called Cocky-leaky; and, with the greatest appearance of luxury and glee in his countenance, extracted from a quantity of broth, in which it had been boiled with leeks, a large cock, which I dare say had been the herald of the morn for many a year. This, he exclaimed, would be exquisite, if the cook had taken care that the broth was sufficiently seasoned; and after he had tasted it, he declared that it exceeded his highest expectations. During this time, I found some of the company pay great attention; and, on the verdict being given, seemed rather impatient: but as I was a stranger, and had not blessed my appetite with a considerable degree of Haggis, my plate was filled first, and I began upon it, whilst their eyes were all fixed on me to hear me pronounce the sentence; which I did, indeed, in the words of the verdict, but with some reluctance; for it was so hard and tough, that it seemed to require the stomach of an ostrich to digest it.” — Edward Topham, Letters From Edinburgh, 1775 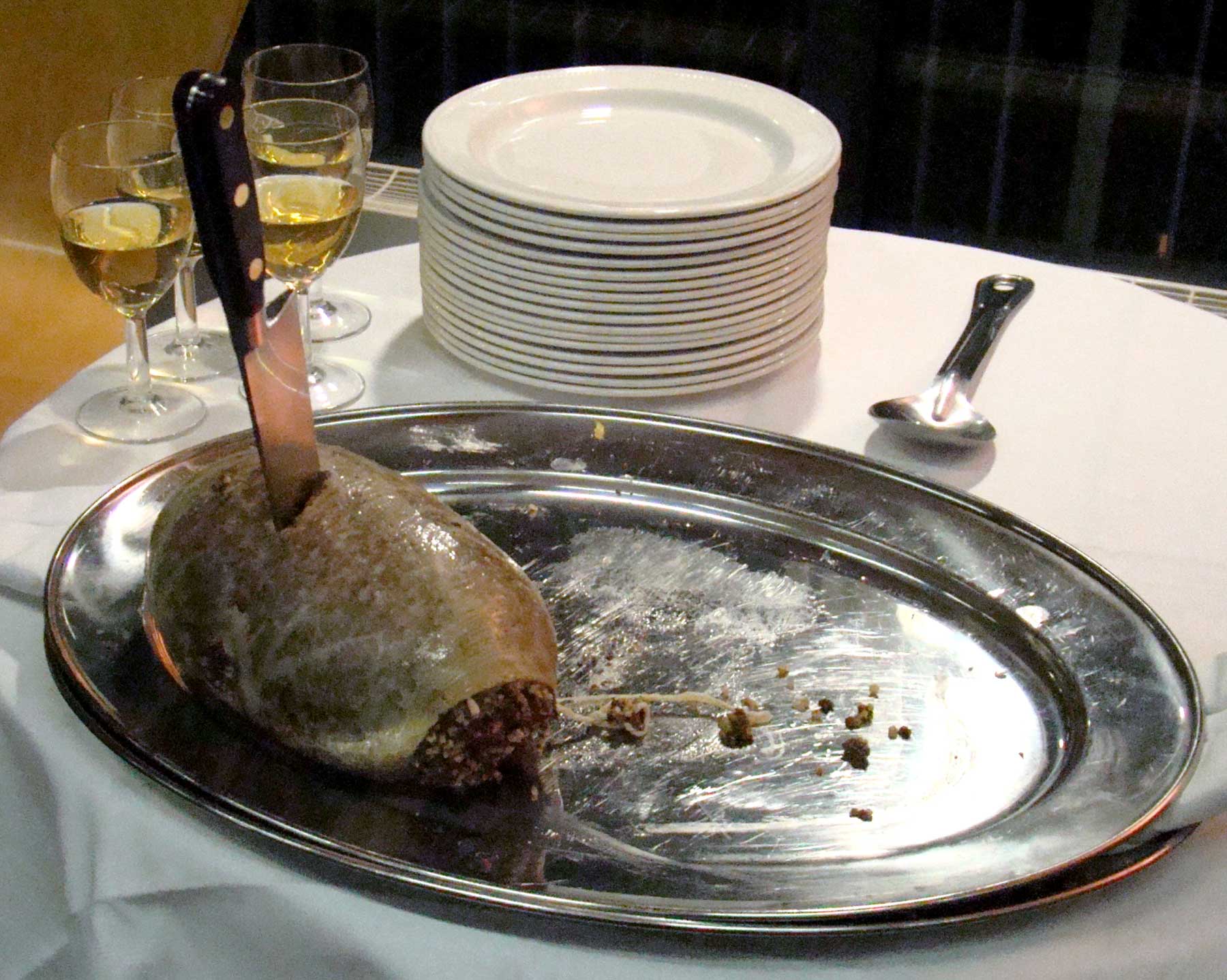 Dutta, Kunal. America’s long wait for haggis may be over. London: The Independent. 25 January 2010. 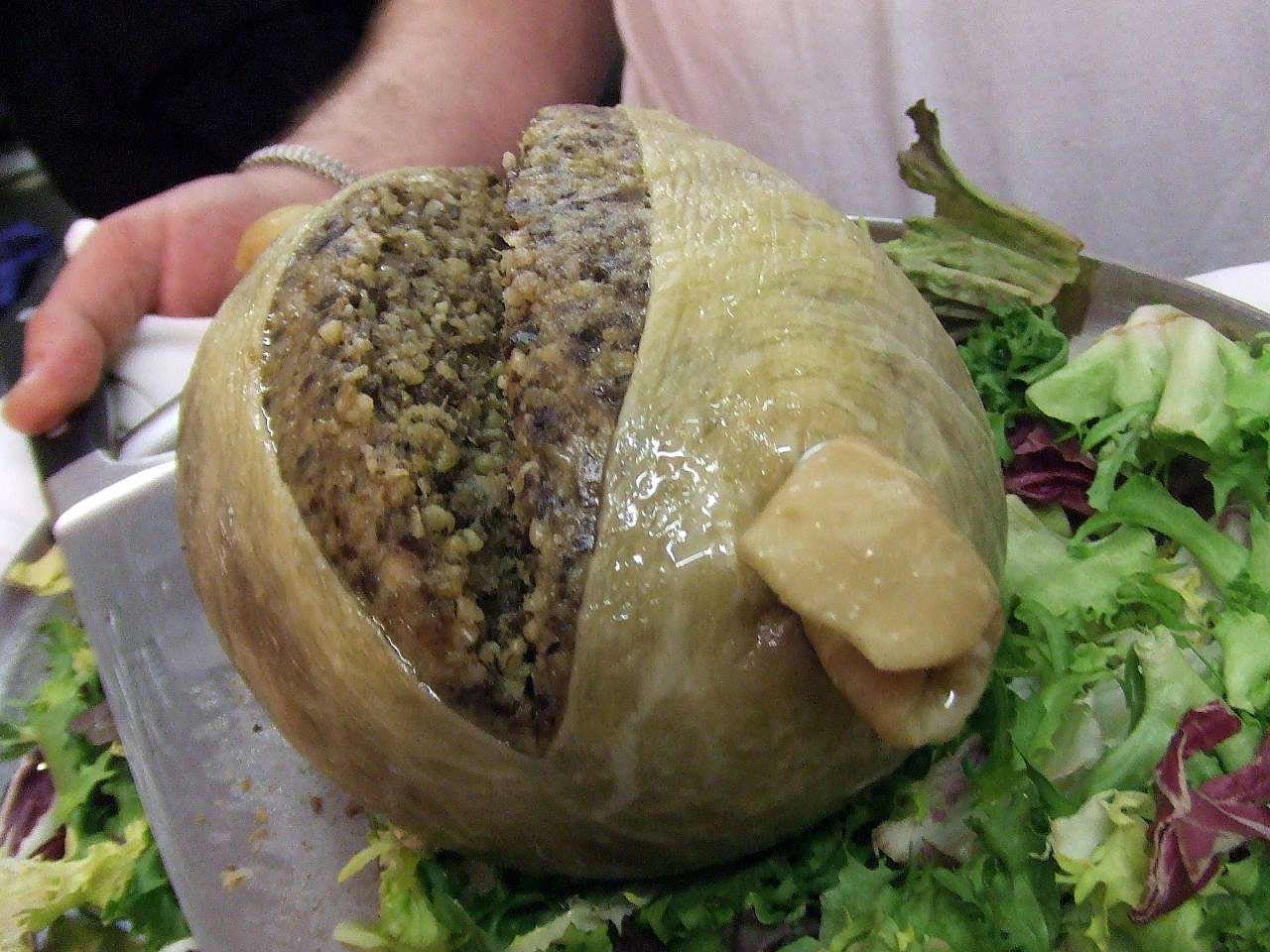 This web site generates income from affiliated links and ads at no cost to you to fund continued research · Information on this site is Copyright © 2022· Feel free to cite correctly, but copying whole pages for your website is content theft and will be DCMA'd.
Tagged With: Sausages, Scottish Food, Steamed Puddings