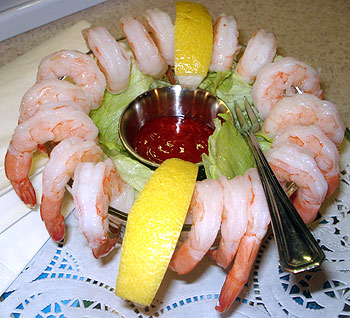 Contents hide
Shrimp Cocktail is a starter dish consisting of shrimp and a dipping sauce. In the UK, it is called “Prawn Cocktail.”

To make the dish, you line a glass with a leaf of lettuce, or with shredded lettuce. You then put in the glass a small amount of a sauce (usually red), and then take cooked, peeled, de-veined and chilled shrimp and drape them over the edges of the lemon, along with a lemon wedge.

In the UK, the sauce is a Marie Rose Sauce, whose base is ketchup mixed with either mayonnaise or salad cream. There are many variations.

In North America, the sauce is just called “Shrimp Cocktail Sauce.” It is ketchup and grated horseradish from a jar. Again, there are many variations. You can buy the sauce ready-made in jars, or get really ambitious and locate recipes that have you starting with fresh tomatoes and grating your own horseradish.

You can get prawn cocktail flavoured potato chips, which combine the sauce and shrimp flavours.

Shrimp Cocktails appear on the scene in the early 1900s.

At that time, recipes were combining seafood with a tangy tomato sauce as starter dishes. Oysters were the popular thing, before shrimp.

Shrimp cocktails are now standard fare in Los Vegas. They were introduced there as a popular food item in 1959 by Italo Ghelfi at the Golden Gate Casino.

“The shrimp and the cocktail made of small California oysters are novelties to most visitors. Here no meal is properly begun without them.” — “In San Francisco.” Fitchburg, Massachusetts: The Fitchburg Sentinel. 14 March 1905. Page 3.

“A silent toast was drunk standing to the honored dead of the association. There was also a toast to the ladies and to the absent members. The following menu was served: Fresh shrimp cocktail…..” — County Clerks Elect Officers; Adjourn Singing. San Antonio, Texas: San Antonio Light and Gazette. 3 August 1910. Page 2.