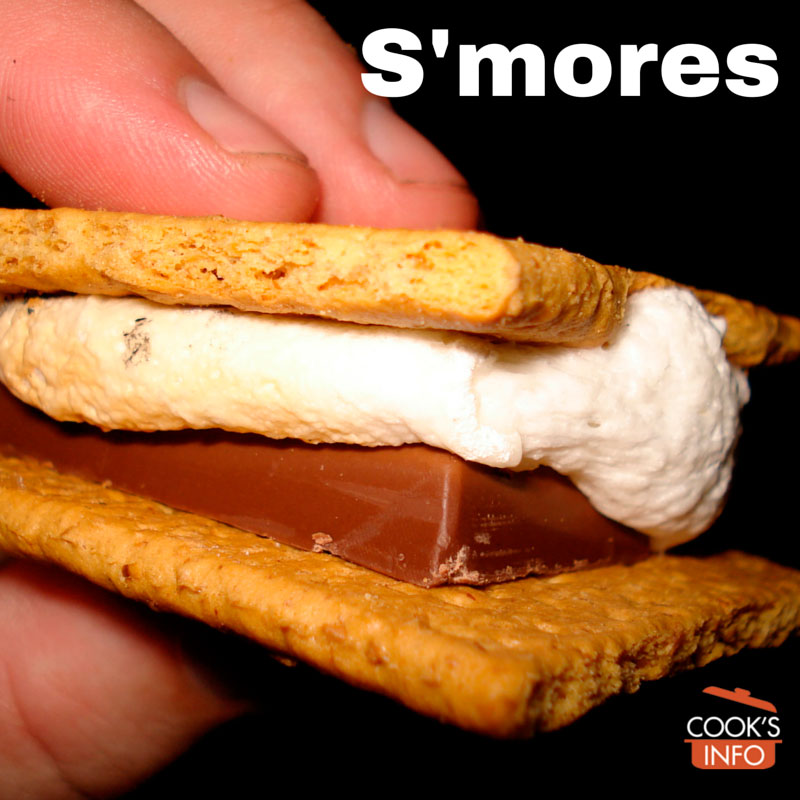 S’mores are square cookie sandwiches with a warm filling inside made in North America. Traditionally, they are made when camping.

They are made with graham wafers, marshmallows and chocolate. These are ingredients that are easily transported and stored while camping. At the height of summer camping season in North America, some grocery stores shelve all three of the ingredients together for quick shopping.

To make them, you toast the marshmallows over a heat source (usually a campfire.) You place a toasted marshmallow on one graham wafer, put a piece of chocolate on that, and top with a second graham wafer, and serve. In theory, and in most people’s memories, the chocolate melts, but the sad truth is that it never really does.

Many adults who loved them as a kid now find they are too sweet for them. So, some adults adjust for grown-up tastes by using dark, bitter chocolate, or Nutella.

At home, you can make your s’mores over a grill or barbeque pit, or you can put them together, and bake them in a moderate oven for 5 to 7 minutes, or you pop them in a microwave for 15 to 20 seconds. Microwaving, though, can make the marshmallow tough, and the chocolate never seems to melt properly, people complain. Starting in the 1990s, Nabisco offered ready-assembled versions called “Suddenly S’mores” specially designed to be cooked in the microwave. They were $2.90 US for 16 of the cookies in August 1990. 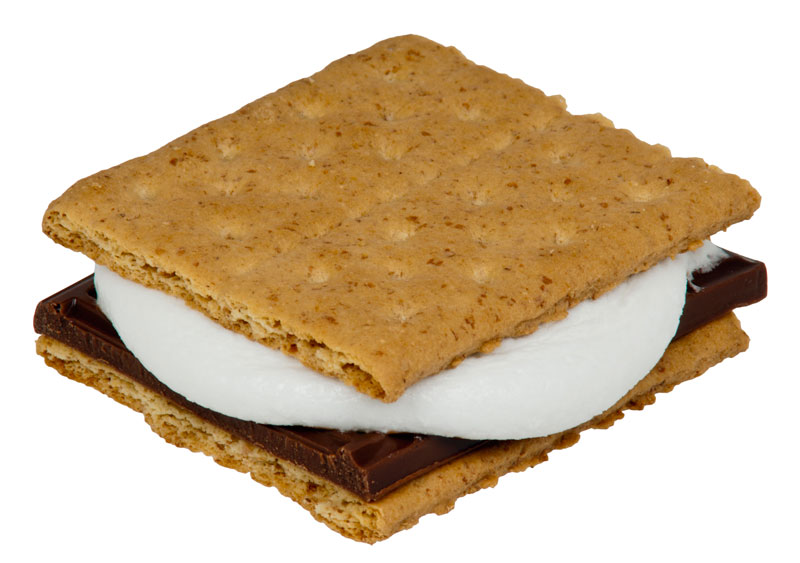 Real fans, though, might buy a special s’mores maker, which come in choices of models, those for kids and those for adults.

The adult one looks like a version of a fondue set. The ingredients are put in small dishes that come with the set, and placed on a plate that rotates like a Lazy Susan. In the middle, there is a burner to toast the marshmallows over. The burner runs on a small can of fuel, such as Sterno (so it’s an activity that needs adult supervision.) Some find the burner area only really big enough for one person to toast at a time, which can cause issues if children haven’t been politeness trained, but the flame is very fast at making them. The set includes colour-coded toasting forks so everyone can keep track of his or her own fork.

Children’s models operate off the heat of a low-watt light bulb, and the plastic assembly is designed to look like a campfire. Instead of forks, kids models offer plastic sticks. The light bulb models can be very slow, though, and usually won’t char the marshmallow unless you’re prepared to hold the marshmallow in it for over 30 minutes.

Some say, though, that what makes campfire s’mores unique is the smokey taste on the marshmallow from the fire. 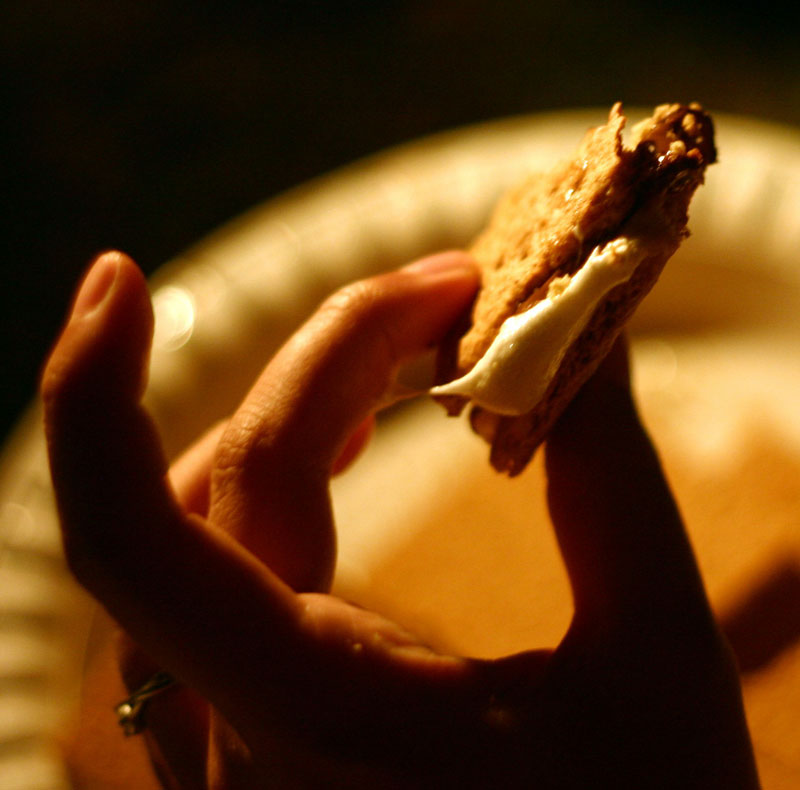 The creation of s’mores is sometimes attributed in tantalizing detail to a girl scout named Megan Janicki while camping with her troop on the Ohio River in 1927. But sadly, the existence of s’mores is recorded a year earlier in an Iowa sighting in October 1926, so there’s another good tale down the pan:

This is not to say definitively that s’mores originated in Iowa — just that it appears to be, so far as CooksInfo knows to date, the place of the first recorded sighting.

An actual recipe first appeared in print, as far as we know, in the 1927 revision of “Scouting For Girls” [2]There were two editions of this book, 1921 and 1927. It was replaced with an entirely new handbook in 1933. Titled “Some More”, it allowed for two toasted marshmallows per treat. Even in this first printing, it was admitted that the chocolate didn’t really melt: “The heat of the marshmallow between the halves of chocolate bar will melt the chocolate a bit.”

By 1940, the recipe in the Girl Scout Handbook was sadly reduced to allowing for 1 toasted marshmallow per “Some More”, but it did allow for variations such as apple slices instead of the graham crackers, or peanut butter in place of the chocolate.

In 2003, Kellogg’s introduced their “Smorz” cereal, meant to call up the experience of eating a s’more. The cereal was still being made as of 2010.

“We then had our lunch which consisted of Angels on Horseback and fried eggs on rocks. Then we made some “somemores” and ate our apples. Mrs. Rainey and Captain Rollins took our pictures. We sang “Taps” and all climbed into two cars and came home happy and full of new scouting vigor. Helen Blackinton and Pearl Drumiler, Scribes.” [3]Girl Scout Notes column. 11 May 1930. Sunday morning edition of the The Ogden Standard-Examiner. Ogden City, Utah.

“S’more” is a shortened version of their original name “Some More”, as in “can I have s’more?”

While the full name was still being used, there was never any general agreement as to whether to put it in writing as two separate words “some mores” or one word “somemores.”

The Girl Scouts are the American version of Girl Guides.

Bagdikian, Ben H. What Happened to the Girl Scouts? The Atlantic. May 1955. 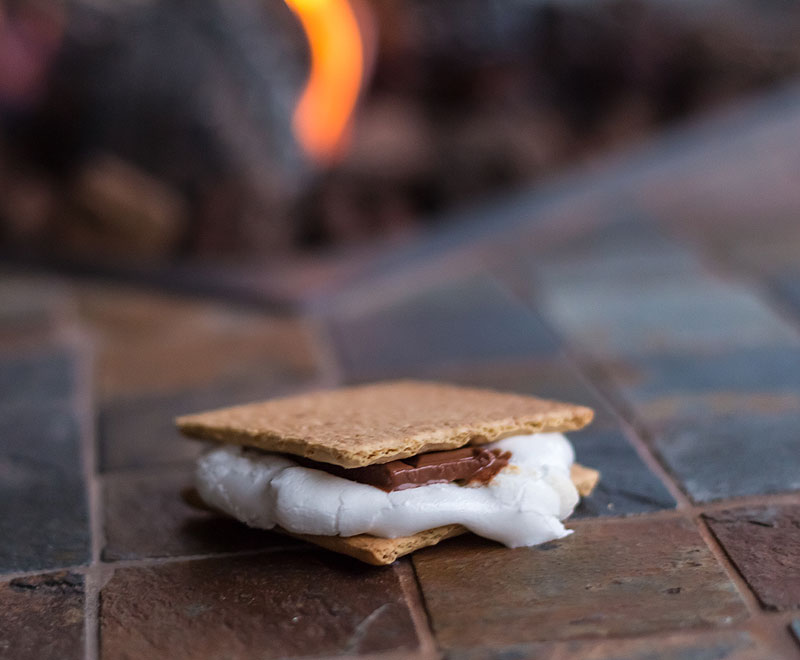