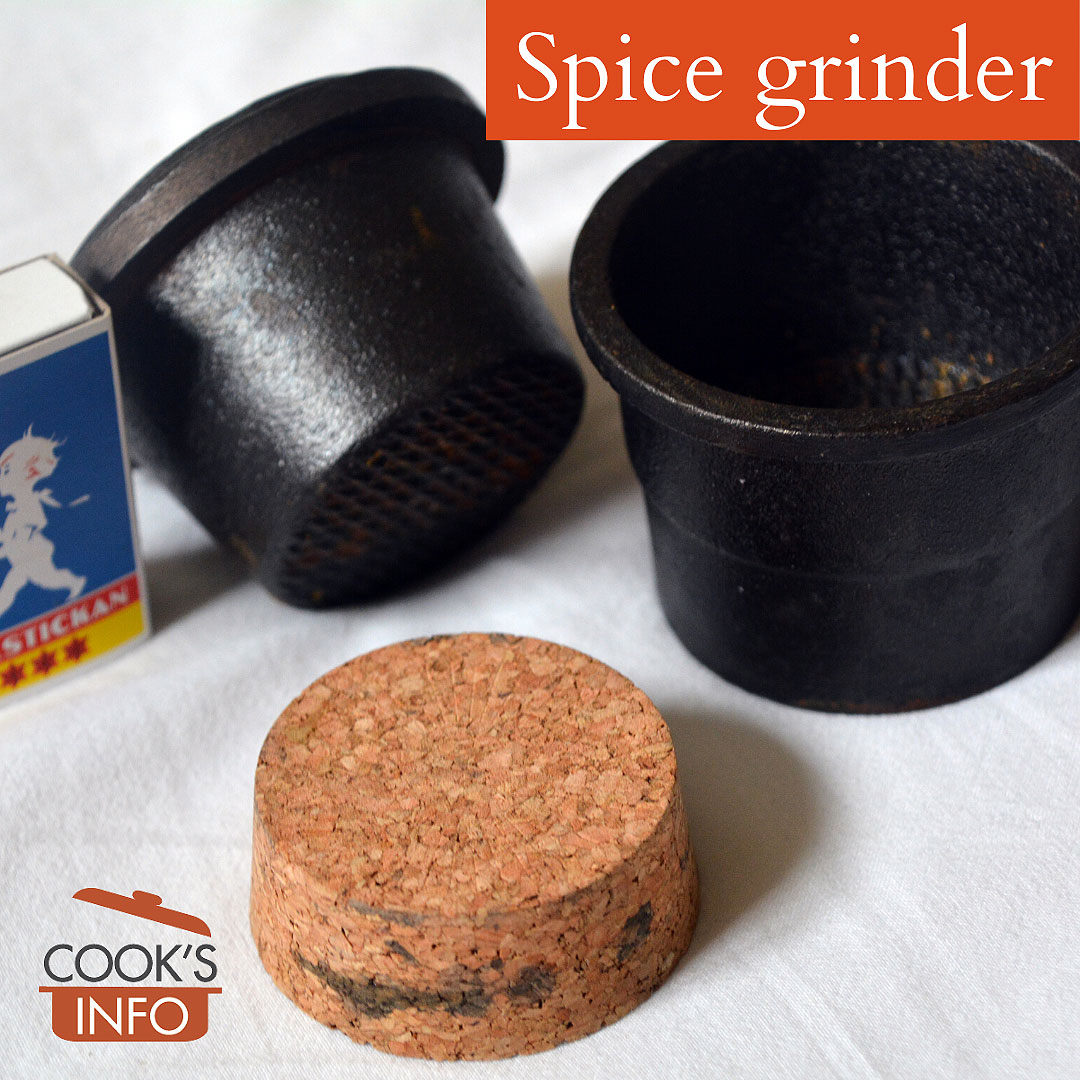 A spice grinder is a tool used to grind up hard, dried whole spices. You can grind them coarsely, or to a fine powder.

There are a few types of spice grinders which are dedicated to one spice alone, such as pepper mills, and nutmeg graters.

Some spice vendors now sell spices in bottles with grinding attachments on the bottle. When you want to use the spice whole, you remove the lid and scoop it out. Otherwise, when you need to use the spice ground, you turn the jar upside down, and turn the lid, which grinds the spice out. Some have a “catch mechanism” on the top that the ground spice falls into. In effect, you get a mini-grinder dedicated to each spice, but as the grinder is combined with the spice storage bottle, it doesn’t take up any more room than spice bottles would in the first place. Most of these are transparent glass bottles, so remember to store them out of the light to extend the storage life of your spices. And as these are designed to be disposable, it does definitely raise the issue of waste.

Using a mortar and pestle to grind spices

A mortar and pestle can be used as a spice grinder, though some people feel that it works better with roundish spices, such as allspice or cumin seeds, than with flat items such as caraway seed or cinnamon stick pieces. Some people say, though, that they can spend 5 minutes fiddling with spices in a mortar and pestle, and still won’t have as good results as they get in 2 seconds with an actual spice grinder.

When all is said and done, one of the best options for a spice grinder appears to still be a manual grinder, where you put the spices in the top, turn the mechanism in some manner, and the ground spice falls out the bottom or the side. Many let you adjust the fineness or coarseness. These work as fast as electric ones.  To clean, put a few pinches of rice through.

If, however, you are having to grind a large quantity of spice at once (say, for home canning or Christmas bulk baking), or encounter soreness of wrists or hands when doing it manually, then an electric grinder will certainly seem more appealing.

Some food processors have spice grinder attachments, but it can seem like a lot of work to haul out a food processor for just ¼ teaspoon of something.

Some people use a coffee bean grinder to grind spices.

Firstly, some people suggest that if you do, you need a coffee grinder dedicated to the purpose. The smell of the spices in the grinder, they say, won’t ever go away and will transfer to coffee, and vice versa.

If the lid or inside of your coffee grinder is see-through plastic, rougher spices such as cinnamon pieces and cloves can scratch it so that you can no longer see through the plastic. Clove oil and allspice oil can reputedly cloud some plastics. Many people don’t mind, though: a cloudy lid doesn’t affect performance, and they say they don’t have the grinder on display, anyway.

That being said, there are few coffee grinders that can actually grind spices finely enough, and that’s those that have actual blades — burr grinders won’t grind spice to a fine enough powder.

To clean out a coffee grinder after you’ve ground spices in it, use a small brush, or whiz a few pinches of rice in it.

This web site generates income from affiliated links and ads at no cost to you to fund continued research · Information on this site is Copyright © 2023· Feel free to cite correctly, but copying whole pages for your website is content theft and will be DCMA'd.
Tagged With: Mills, Nutmeg Grinders, Pepper Mills, Spices