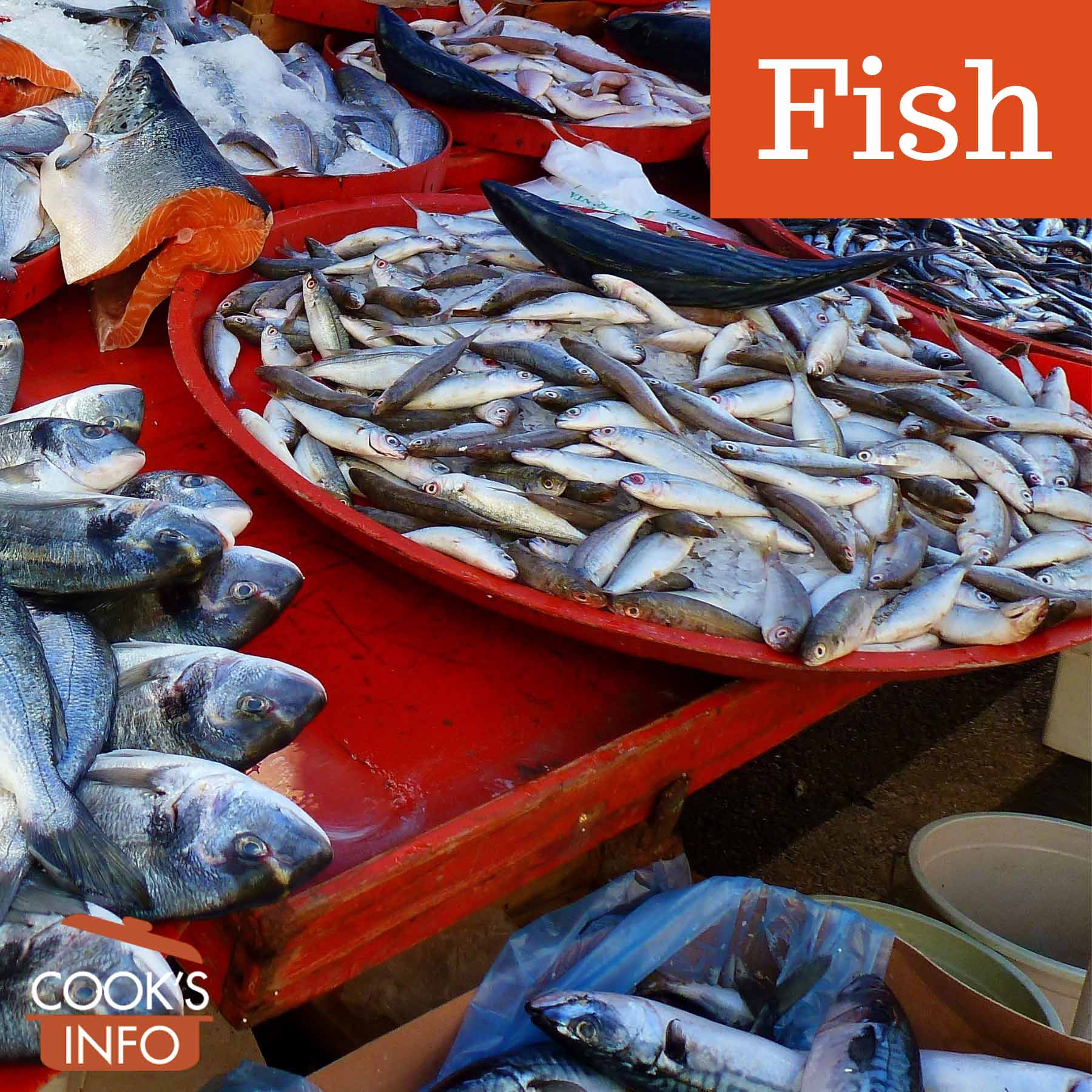 Fish are aquatic animals that, with very rare exceptions, live their entire lives in the water. They can live in fresh or salt water.

Although fish can now be and are farmed, there are no species of fish that are considered “domesticated”, in the way that cows or chickens are.

When buying a whole fresh fish, look for red gills, and eyes that look alert (even though they’re dead) and that are bulging out, as opposed to sunken in and dull. There should be no fishy smell.

As far as the kitchen is concerned, there are two main types of fish, regardless of whether they came from sea or lake: lean fish and oily fish. Lean fish are any fish called “white fish“; they are less than 5% fat. Oily fish are known as “blue fish“. They will have anywhere from 5 to 25% fat and will have darker, stronger tasting flesh. (These are the ones that dietitians are now encouraging people to consume more of.)

Some of the following reasons put people off fish:

At various times, we are told to avoid certain types of fish for environmental reasons. A few months later, there are pleas to buy those fish in articles on unemployment in those particular fishing niches.

Small wonder that people are confused.

The term “whole fish” designates a fish that comes as is, straight out of the water. No preparation has been done to it. Whole fish can appear to be a better buy per pound, but remember that in preparing the fish you are going to throw a lot out. Still, though, it does end up somewhat cheaper as you’re not paying someone to do that work for you.

Whole fish needs to be bang-on fresh, as the entrails are still in there and they are what cause a fish to spoil really fast. This is why you often see fishermen cleaning their fish right on the docks. When buying a whole fish, allow about 500 g (about 1 pound) per person.

The fish has been cleaned, in so much as all the entrails and the scales have been removed (though not all fish need scaling.) The head, tails and fins are left on. There will be a slit that was made through its belly to allow for the cleaning to happen. The French, though, to avoid slitting the fish, may draw out the insides with a hanger through the gills.  The bones are left in and the skin is left on.

It is the bacteria in the entrails that causes fish to spoil quickly, so a cleaned fish will last longer.

In addition to being dressed (see above), the fins, tail and head have been removed. Otherwise the fish is “whole”, it’s not cut into pieces, and the skin is left on. Smaller fish, such as fresh sardines, are usually cooked whole this way, as are some larger fish such as trout and catfish. If you are going to grill fish on a barbeque, or to stuff them, it is easier to work with them this way. The term “pan-dressed” is used because with the head and tail cut off, most fish will fit into a frying pan of some size.

When buying a pan-dressed fish, allow about 250 g (½ pound) per person.

Fish fillets are cuts of fish made from the sides of the fish, cut away from the spine and removed in one piece.

They are usually boneless in most fish, though some fish will have bones called “pinbones” that come out from the spine into the fillet. These bones may or may not be removed, though they usually are as there is a general consumer expectation now that fillets mean boneless.

Often the skin is left on one side of the fillet.

There are usually two fillets cut per fish.

A fish steak is a cross-section of the fish cut through the backbone. The backbone will be left in it, along with other bones, and the outside edges may still have the skin on them. They are usually cut 2 to 4 cm (¾ inch to 1 ½ inches thick). They are made from larger fish such as tuna, salmon, groper, mackerel, etc. They are not made from flat fish.

Fish steaks are more fiddly to eat because of all the bones in them, and are therefore cheaper than fillets. When buying fish steaks, allow about 125 g to 250 g (¼ to ½ pound) per person.

To be successfully smoked, a fish needs to have a high oil content, or it will dry out. Hot-smoked fish that was smoked above 60 C (140 F) needs no further cooking; cold-smoked fish does. Low-fat fish, though, such as cod, dry well.

To descale a fish, cut off the fins, leaving the tail on. Hold onto the tail, and with the back of a knife scrape from the tail towards the head. Rinse.

Folk wisdom holds that lighting a candle in the kitchen when cooking fish helps prevent the fishy smell from building up in the house. It doesn’t really work.

Typical cooking mistakes with fish are (a) overcooking it and (b) the opposite, which is underestimating how long it needs to cook. This usually happens on a barbeque, where beef steaks may be being grilled for as little for about 2 to 3 minutes a side. In this case, the fish needs to have a head start.

Though some fish will require special cooking times, the general method developed by the Canadian Department of Fisheries is the one that most people in the world seem to have adopted:

This rule refers to the fish at its thickest part. Using this rule for a 2 cm (¾ inch) salmon:

If you’ve thawed the fish before cooking, then the 20 minutes frozen rule doesn’t apply; the 10 or 15 minute rules do.

When you are frying or grilling, you should obviously flip the fish half-way through its cooking time. Just flip it once.

When cooked, fish flesh will be opaque and will flake easily with a fork.

Don’t salt the fish before cooking, as salting draws out moisture. Oil the fish, except for oily fishes such as mackerel or sardines. No fish should need marinating any more than two hours – don’t over-marinate, because acidic sauces can actually cook the fish – witness the Latin American dish “ceviche”, in which the fish is cooked in a vinegary sauce without ever seeing any heat.

If there is skin on the fish, leave it on. It will help keep the fish intact and protect it from drying out. Cut deep slashes through the skin to allow an even heat to penetrate into the fish.

Unless the fish is “cook from frozen”, set it out of the refrigerator about 30 minutes before barbequing to allow the insides to just come to room temperature to allow for more even heating. If you are not using a basket to cook the fish in, try to turn it only once to prevent its coming apart on you.

Frying fish with coating or a batter

The problem is having the crust, coating or batter coming off the fish during frying. To help avoid this:

There are two different schools of thought on how to apply the coating in a way that will actually get it to stay on the fish, and not fall off:

If using a meat thermometer, the minimum safe internal temperature given for most fish seems to be 68 C (155 F). Parasites and tapeworms that may be present in fish will be killed at 60 C (140 F). Hot-smoking, if the temperatures exceed 60 C (140 F), as they normally do, will also kill them.

Curing fish for 5 to 7 days will kill parasites and tapeworms, but only provided that the curing involves salt. It can be a dry-salt cure or a wet-cure using brine.

The parasites and tapeworms can also be killed by freezing. Both Health Canada and the U.S. Food and Drug Administration recommend only eating raw fish if it has first been frozen commercially for at least 15 hours at -35 C (-31 F ) or 7 days at -23 C (-10 F). Home freezers generally can’t get low enough to do the trick; that’s why they stipulate “frozen commercially”.

Use fresh fish within a day of purchasing it. You can wrap it in the meantime in plastic wrap. Fish stored on ice should be placed in such a way that water from the melting ice will drain away from the fish.

To freeze fish, it must first be dressed (cleaned). Whether you then freeze it in one piece or cut it up is up to you. You can wrap it in plastic wrap, and then put it inside a freezer baggie or give it a second wrap with tin foil.

Or if you buy milk or juice in cartons, take an empty carton, open it up at the top, rinse it out well with water only, put the fish in, fill with water to cover the fish, close the top and freeze. You can also place it inside a plastic bag if you want. Don’t use soap to wash the milk carton out with, or use a carton in which milk has gone bad, as the taste will remain and go into the fish. If you do freeze the fish in this way, when you thaw the fish the water is a bonus fertilizer for any outdoor plants you have. 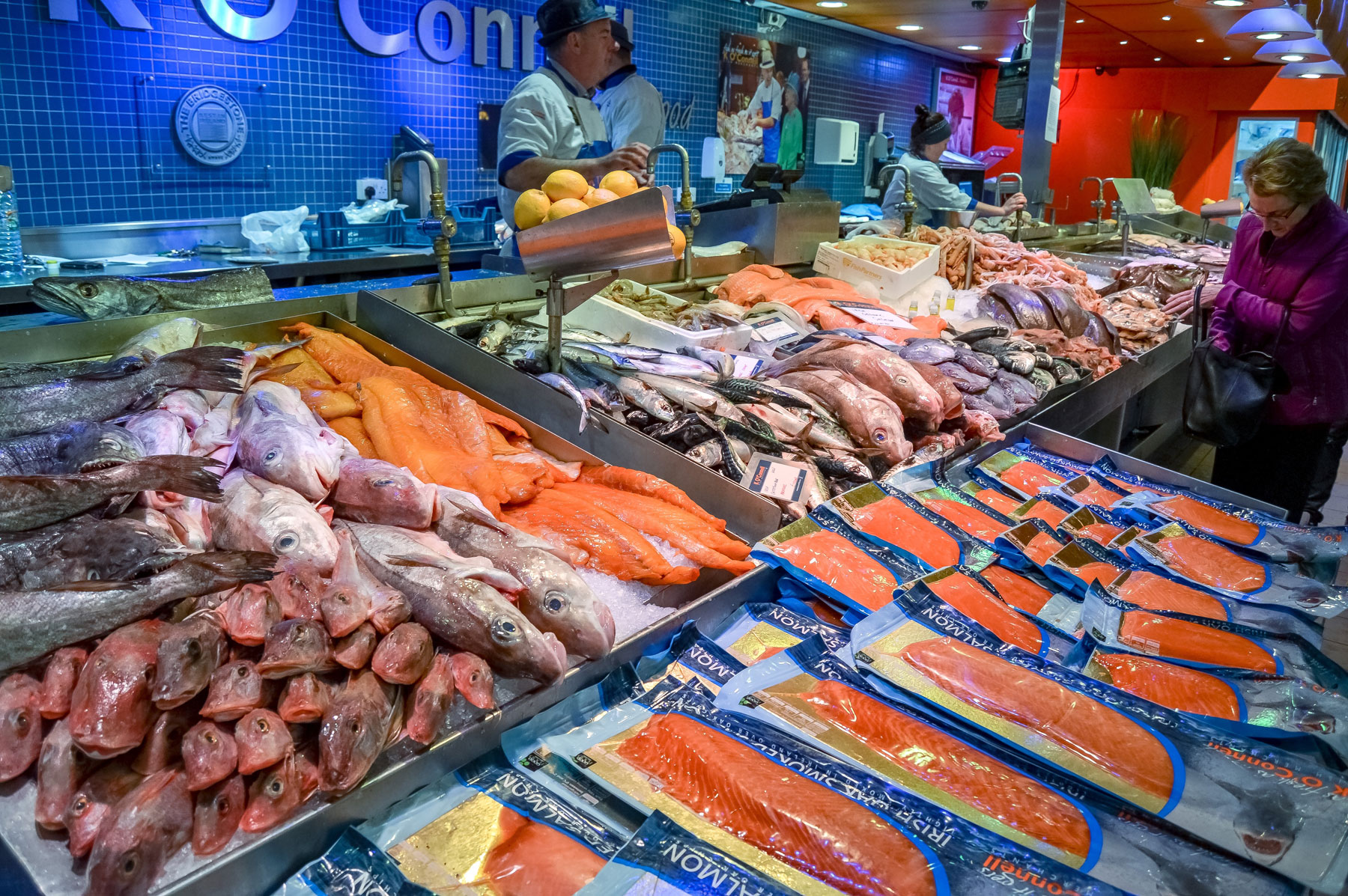 It was traditional in the Roman Catholic Church to have “meatless Fridays”, on which fish was eaten instead of meat. After the Anglican Church in England broke off from the Roman Church, fish consumption dropped dramatically, though avoiding meat on Fridays was still Anglican “official” policy. To bolster the fish market, English authorities tried twice to re-instate meatless days. In 1548, they tried to make it Saturdays, and in 1563, they tried to make it Wednesdays. Neither attempt was successful: in fact, it is Fridays that still remain the big day for fish and chip shops throughout Britain.

The famous fish market in London was Billingsgate in the City of London. In 1982, the market moved to the Docklands in London.

“The Greeks and Romans, though they had not made as much progress as we have in the art of seasoning fish, esteemed it very highly, and were so delicate that they could even tell where it had been taken.” — Jean Anthelme Brillat-Savarin. The Physiology of Taste, Section IV. The Turkey. Project Gutenberg, Apr 2004. First published Dec 1825.

St Andrew is the patron saint of fishermen.

In Dublin, “one and one” is slang for “fish and chips”.

“Fish should smell like the tide. Once they smell like fish, it’s too late.” — Oscar Gizelt (Chef, Delmonico’s Restaurant, New York).

Sometimes people, or organisations such as the United States Food and Drug Administration, get more vague about their definition of fish, and include clams and oysters in it. This then leads to their having to use terms such as “shellfish” for things like oysters, and “finfish” for — well, for fish.

Unsustainable Fishing: The Situation in The Mediterranean (Food Unfolded)

Sampson, Susan. At the fish counter you may not get what you pay for. Toronto Star. 11 November 2009.