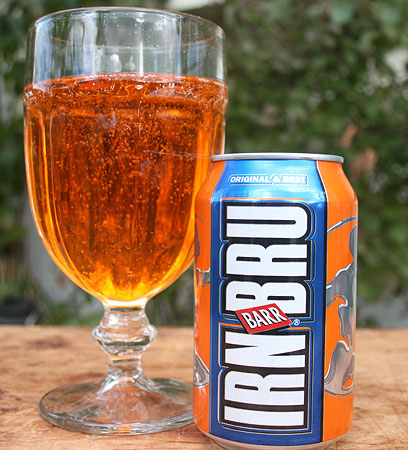 It tastes like a cross between bubble gum and cream soda.

IRN BRU has remained the number one soft drink in Scotland today (2005), but Coke is very close behind now. It is the third best-selling soft-drink in the UK overall, after Coke and Pepsi. The manufacturing in Scotland now done in Cumbernauld, but the headquarters are in Glasgow. The company also produces the drink in England, in Bolton, outside Manchester.

The exact ingredients are secret, though it contains caffeine. The ingredients listed in the UK labelling are: water, sugar, carbon dioxide, citric acid, flavourings, preservatives.

There is also a diet version.

Advertising for this soft drink is typically whacky, unorthodox and unconventional. It advertises itself as “made in Scotland – from girders”, playing on the rusty colour.

Not the same as other drinks called “Iron Brew.”

IRN BRU was invented by the Barr family in Falkirk, Scotland.

Robert Barr started making carbonated water in 1880. He had three sons, one of whom was Andrew Greig Barr (1872 – 1903.) Andrew went to Falkirk High School, then Stewart’s College in Edinburgh, then after worked for Clydesdale Bank in Falkirk, and then Larbert. Then, he joined his father’s business along with his younger brother William. His older brother, Robert Fulton Barr, was already in the business.

Andrew moved off to manage the Glasgow operations (opened in 1887), which became independent in 1897. He came up with the ingredient list for IRN BRU, and introduced the product in 1901. He called it “Iron Brew.”

He married Isabel Margaret Gibb at Dollar in 1903. He died 11 weeks after his marriage from pneumonia and blood poisoning, and left the business in the hands of William.

William bought the company out from shareholders in 1904 to take it private under the name A. G. Barr and Company. The company became famous after the 1930s for its draught horses, very large Clydesdale horses.

Production of IRN BRU was halted during World War II, until 1946. By then, food labelling regulations were requiring product names to be truer, so a name change was in order. Consequently, the ingenious solution of IRN BRU for the name was hit upon.

In 1959, A. G. Barr and Company and Barr’s merged back together again.

Sales of IRN BRU began in Russia in 1994. In 1998, they began manufacturing in Russia through a franchisee. Now, since 2002, it is made in Russia under franchise by the Pepsi Bottling Group (sic). Special 250ml sized bottles are being made for Russia, to keep the cost to the consumer down.

To Russia with Love: Second Barr None. Scotland.org. January 2003. Retrieved November 2009 from http://www.scotland.org/about/innovation-and-creativity/features/business/invasion.html

This web site generates income from affiliated links and ads at no cost to you to fund continued research · Information on this site is Copyright © 2022· Feel free to cite correctly, but copying whole pages for your website is content theft and will be DCMA'd.
Tagged With: Pop, Scottish, Scottish Food