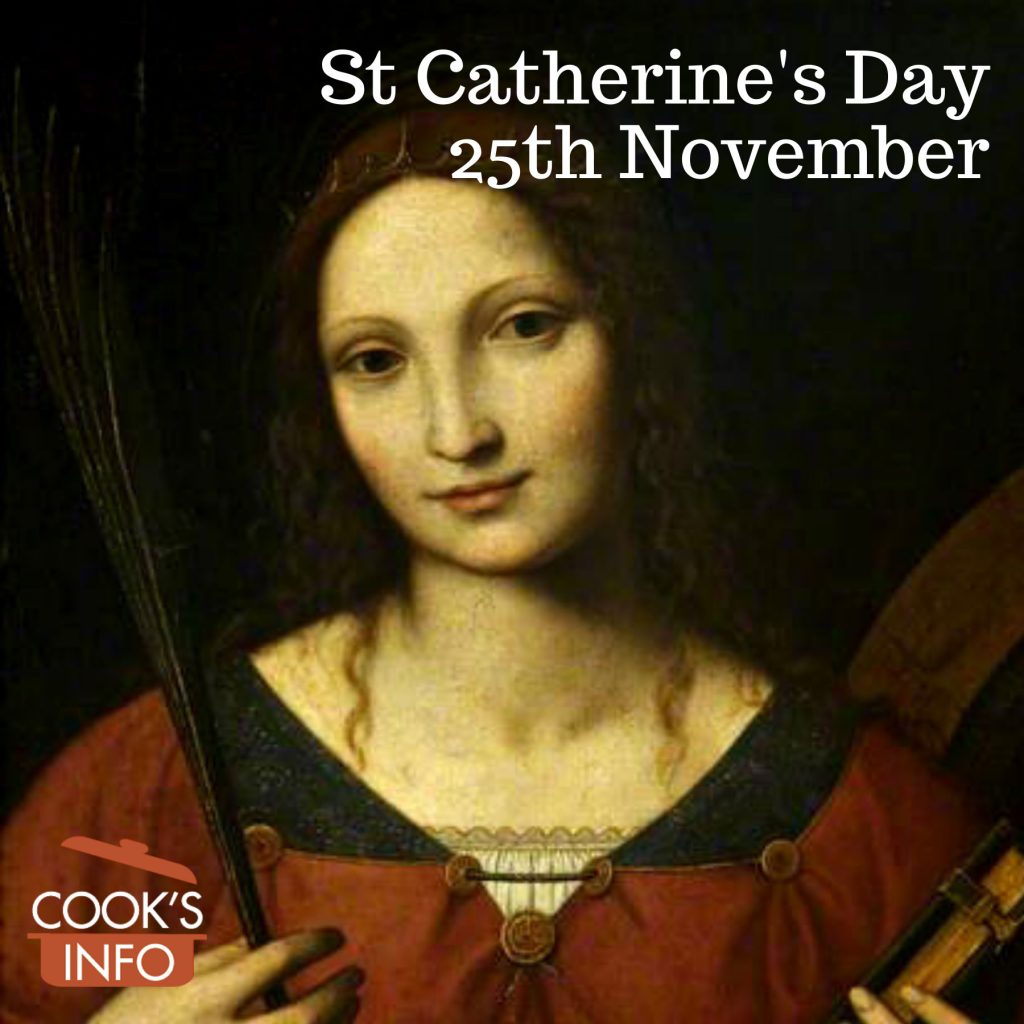 The 25th of November is St Catherine’s Day. It’s traditionally celebrated with taffy.

St Catherine was a popular French saint, one of the saints that Joan of Arc frequently struck up conversations with.

Her day is considered a special day for single women. Taffy pulls were held in some places as an excuse for a party for single women (“Catherinettes” in French) to meet eligible bachelors, in time for a date at the Christmas parties that would soon be starting. 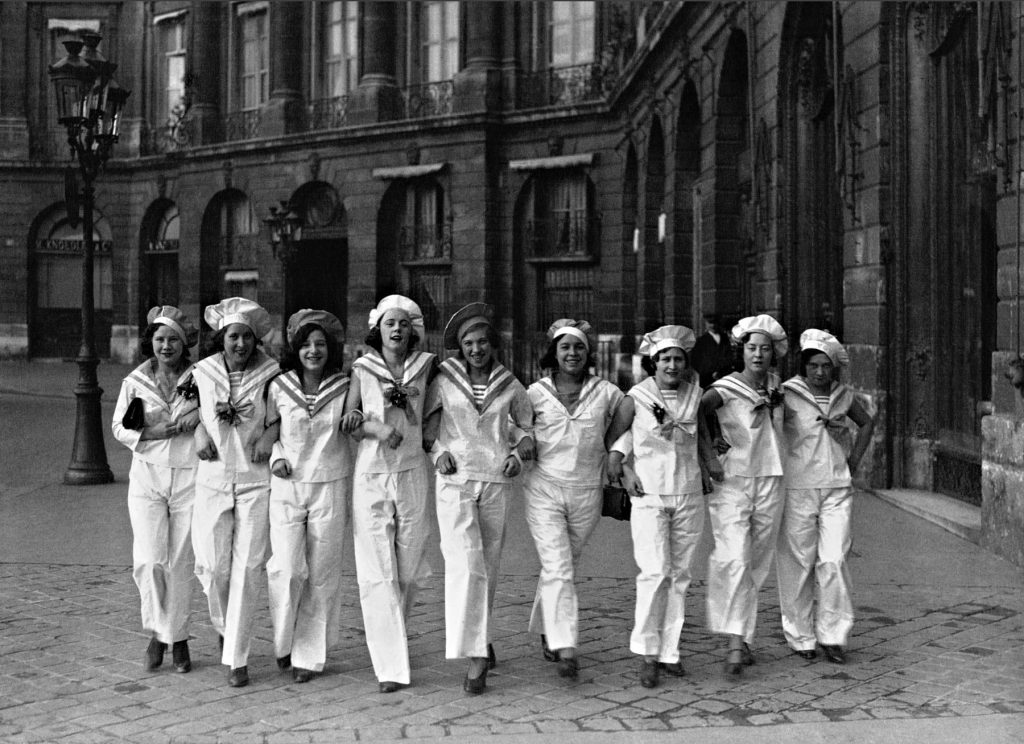 Catherine lived in Alexandria, Egypt. She was broken on a wheel then beheaded for both refusing to marry the Roman Emperor Maxentius (c. 279 – October 312) who was visiting Alexandria around 307, and really annoying him as well by converting one of his other wives plus 200 of his personal guardsmen to Christianity.

The story is problematic, though, as Maxentius may never have travelled to Egypt at all. He was constantly busy in Italy trying to defend his claim to the throne, and he tolerated Christians, though he wasn’t one himself. One of his rivals was Constantine, the first Christian Emperor: many of the stories about how evil Maxentius was to Christians seems to have sprung up after Constantine deposed him and came to the throne. 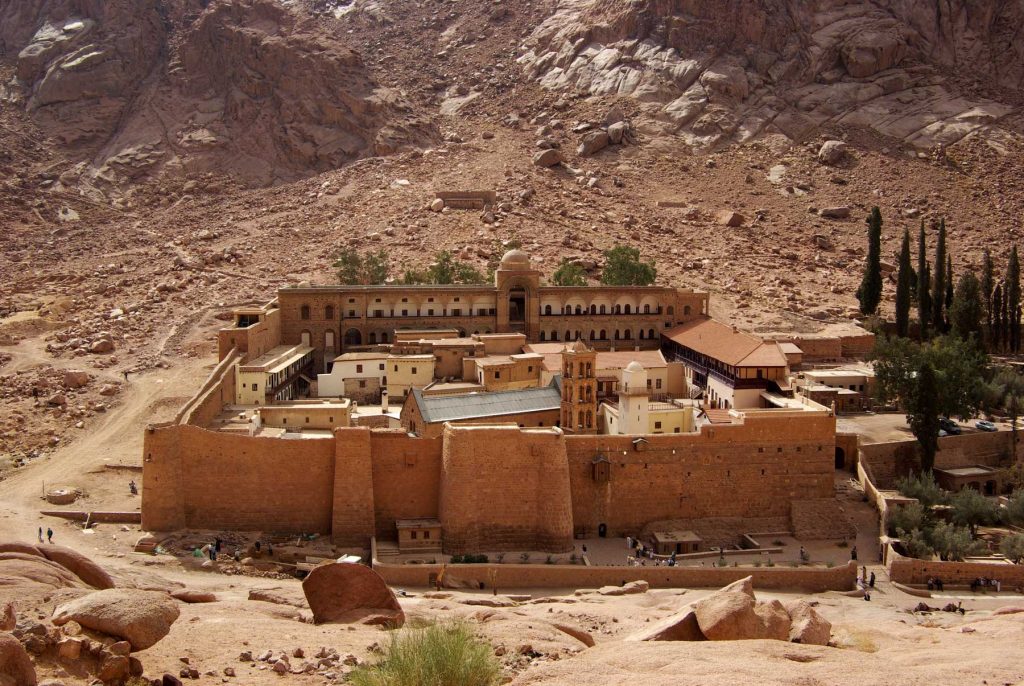 She became the Patron Saint of unmarried women sometime in the 1100s.

One of Montréal’s main streets is named after St Catherine.

Sadly, the Church now considers her story a legend, and her feast day was struck from the Church calendar in 1969. In 2002, though, it was restored, but as an optional day.

An English writer reported on St Catherine’s Day in Paris, 1913:

“St. Catherine — not of Sienna, but the one before whom the dragon quailed — is the patroness of girls of all ranks, that is until they have reached their twenty-fifth birthday. The saint’s day — November 25 — is celebrated by young sempstresses and saleswomen. The girls hire a wax head at a hairdresser’s, put a bonnet on it, and call it Saint Catherine. The coiffure is generally a grotesque muslin or mob cap. It used to be also placed on girls on their twenty-fifth birthday by way of a hint that they were old maids. Of recent years the elder girls of a workshop are spared this humiliation, and the younger ones are chosen to wear the cap.

This year, the Catherinettes kept their saint’s day with unwonted stir and public festivity. The illustrated papers offer prizes for designs of caps for the saint. This led to a creative fever in the workshops and a show of delicious things borrowed from the coifs of the Dunkirk, Calais, Caux, Brittany, Poitou, Basque, Provence ports and from many regions where far back ancestral costumes are still worn. Employers entertained their girls at tea parties, followed by recitations, singing, dancing and acting. The Catherinettes then paraded the boulevards.

All the girls wore muslin caps. With their youth, grace, spirits, the Catherinettes were charming. Not one could be called dressy, as she wore her neat, plain, dark working clothes. The police cleared the way. However, an onrush of students spoiled the fete. They thought well to see in the Catherinettes — all decent girls — damsels of the Moulin Rouge. The gaiety became rowdy. The police interfered in good time. Girl Scouts stood firmly by their ensign. Their dress rather jarred on the light-hearted and prettily civilised character of the festivity. Not that any one saw harm in this assumption of the clothes of another sex. Would you believe it? No cap became the girls so well as the grandmother’s, or mob cap of the eighteenth-century ‘eighties and ‘nineties. It was none the worse for old-fashioned bows of ribbon.” —Notes from Paris. London, England: Truth Magazine. 3 December 1913. Page 1310, col. 2.

Also known as “taffy day” in Québec. In Québec, “Catherinette” used to be an expression for a single woman over 25.