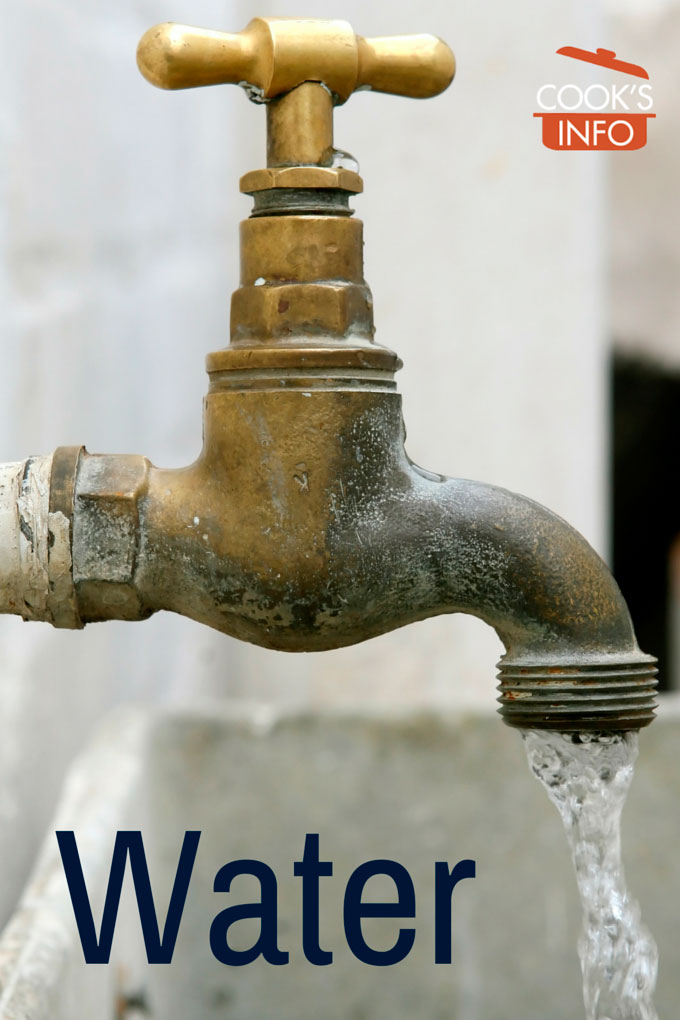 Water is a naturally-occurring liquid chemical substance. Around 3% of the earth’s water supply is fresh (non-saline) water, which is needed for food-growing and kitchen use. Brazil, Russia, Canada and the United States are the countries, in that order, with the greatest freshwater supplies.

Water is possibly the single-most important item that a cook needs in a kitchen. There are alternatives for cooking fuels and tools, and food substitutions can be made in recipes. But in terms of general use, for washing, cleaning and as the base of all kitchen liquids, water has no substitute.

It’s only quite recently in human history that we could assume water was good to drink; let alone thinking of it as something you would drink on its own, for its own sake. Before that, philosophers even debated whether drinking too much water, like bathing too much, were bad for you. In addition, there were many waterborne diseases that could afflict people — a clear, clean look to water was no guarantee that it was safe. For that reason, people drank boiled water (the Chinese with their tea), or ale or wine in preference to water. The old European habit of pouring some wine into water, which might seem as though it is meant to reduce the alcohol one were drinking, actually purified the water.

The Romans of course had many aqueducts coming into Rome. Some brought water intended for industrial use, flushing sewers, etc., but some, such as the aqueducts called the Aqua Marcia and Aqua Virgo brought water in that was specifically for drinking and cooking with, and the Romans took great care to make sure that this water remained safe for both. Contrary to popular belief nowadays, Romans were well aware of the danger of lead pipes. [1]Some classical scholars now feel that at least in some parts of the Roman world, the interiors of lead water pipes would have become naturally lined with layers of calcium, anyway. Others indeed point out that the Romans seem to have preferred hard water with lots of minerals in it, because it made any leaks in the pipes self-sealing over time. Water usage was generally free unless you were an industrial user. While the wealthy would actually have pipe systems coming into their homes, the rest of the population would go to public fountains fed by the aqueducts. In Pompeii, you didn’t have to walk more than 150 feet to get to such a fountain. But after Rome, public water systems disappeared, and authorities looking after the water quality disappeared with them for the next 1500 years.

Because the poor in Britain would drink beer rather than unreliable water (beer being served even in schools and hospitals), the Temperance movement became a champion of safe public drinking water. By the mid 1800s, a public supply of safe and reliable water had become in the mind of the public a necessity of life, just like air.

It was only in the early twentieth century that authorities understand enough about water to institute chlorination and filtration. Even if chlorination was unnecessary and impacted the taste, the authorities running waterworks projects found that it instilled public confidence.

The old habit of distrusting public water, and drinking bottled water, has long remained in Europe. But only in the last 20 years of the 1900s did bottled water start to gain popularity in North America. At first it was part of a general belief that bottled water was better in general than public drinking water, a belief not really born out by any science. Since then, it’s become more of a prestige thing, and as important a fashion accessory as a mobile phone.

By the beginning of the 2000s, North American dentists were pleading with parents not to give their children bottled waters. Public water in North America is fluoridated to help reduce tooth decay; with fluoride being absent in bottled waters, dentists have been seeing a rise in dental decay amongst children, and adults as well.

By the end of the 1900s, health authorities began recommending that we drink a good deal of water each day on its own.

In 1945, Grand Rapids, Michigan and Brantford, Ontario, were the first cities in North America to fluoridate their drinking water. In Brantford, by 1953 dental decay in children’s teeth had decreased by 60%.

“In wine there is wisdom, in beer there is strength, in water there is bacteria.” — David Auerbach (food writer)

This web site generates income from affiliated links and ads at no cost to you to fund continued research · Information on this site is Copyright © 2022· Feel free to cite correctly, but copying whole pages for your website is content theft and will be DCMA'd.
Tagged With: Roman Food