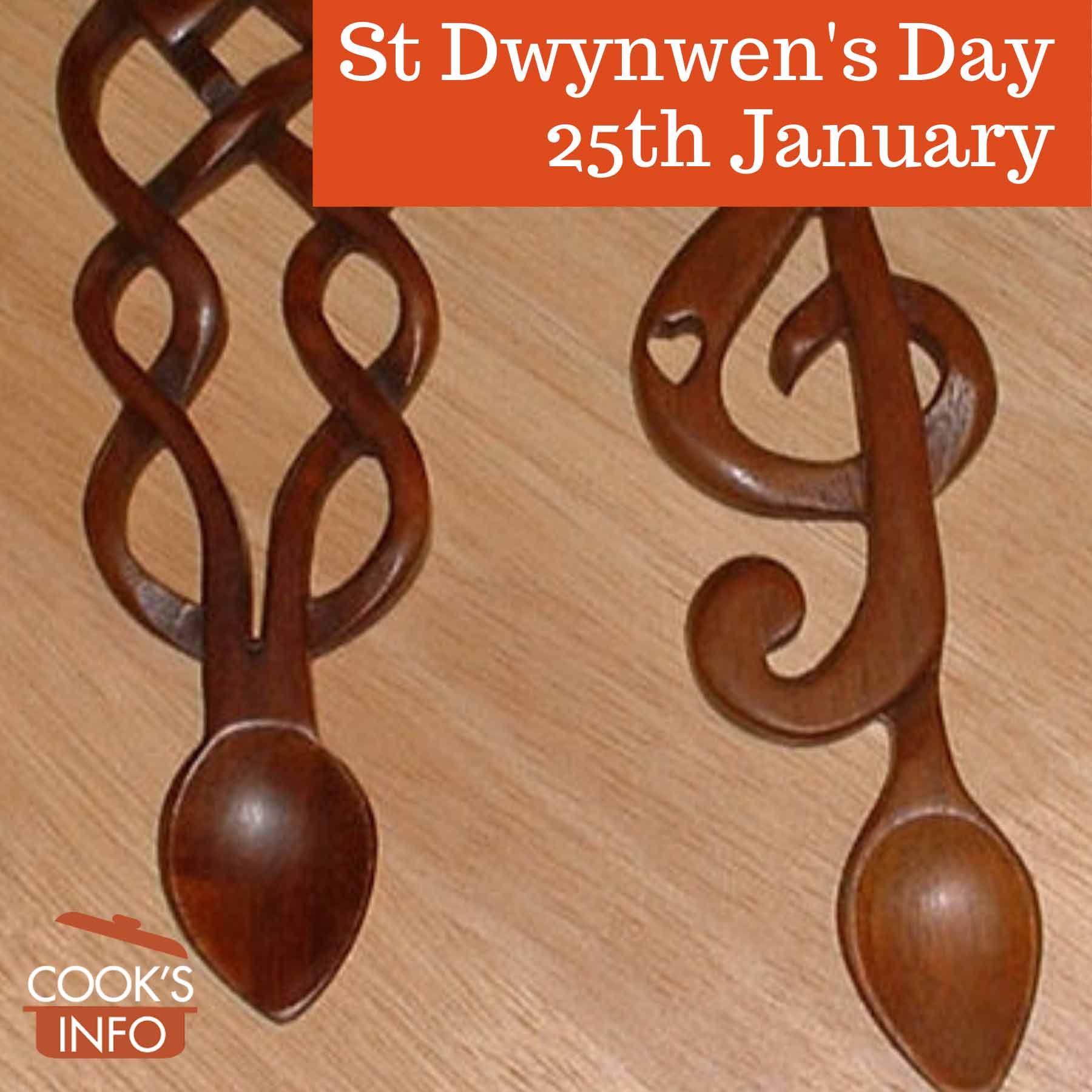 The 25th of January is St Dwynwen’s Day.

Some call it the “Welsh Valentine’s Day”, but instead of chocolate, carved wooden lovespoons are given.

“The Welsh celebrate St. Dwynwen’s Day on January 25th. And if you want to show your sweetheart that you REALLY love them, you don’t get them chocolates or flowers or jewelry; you get them … a spoon. “It’s a Welsh tradition, which dates back to the 17th century,” he said. “Lovespoons were carved by young men, and offered to the young ladies that they were courting. And if accepted, they were then regarded as tokens of engagement, or betrothal.” ” [1]Knighton, Conor. Tokens of love: The Welsh tradition of lovespoons. CBS News. 11 February 2018. Accessed February 2021 at https://www.cbsnews.com/news/tokens-of-love-the-welsh-tradition-of-lovespoons/

Concerts and parties are held, and greeting cards are now being sold.

Some people say they choose to celebrate it instead of St Valentine’s Day because it is less commercialised, but if it catches on more, perhaps it is only a matter of time.

To celebrate today, you could serve Welsh griddle cakes, or Welsh Rarebit. Or, go to a Welsh restaurant if you have one nearby.

And don’t forget to give a loved one a carved spoon! 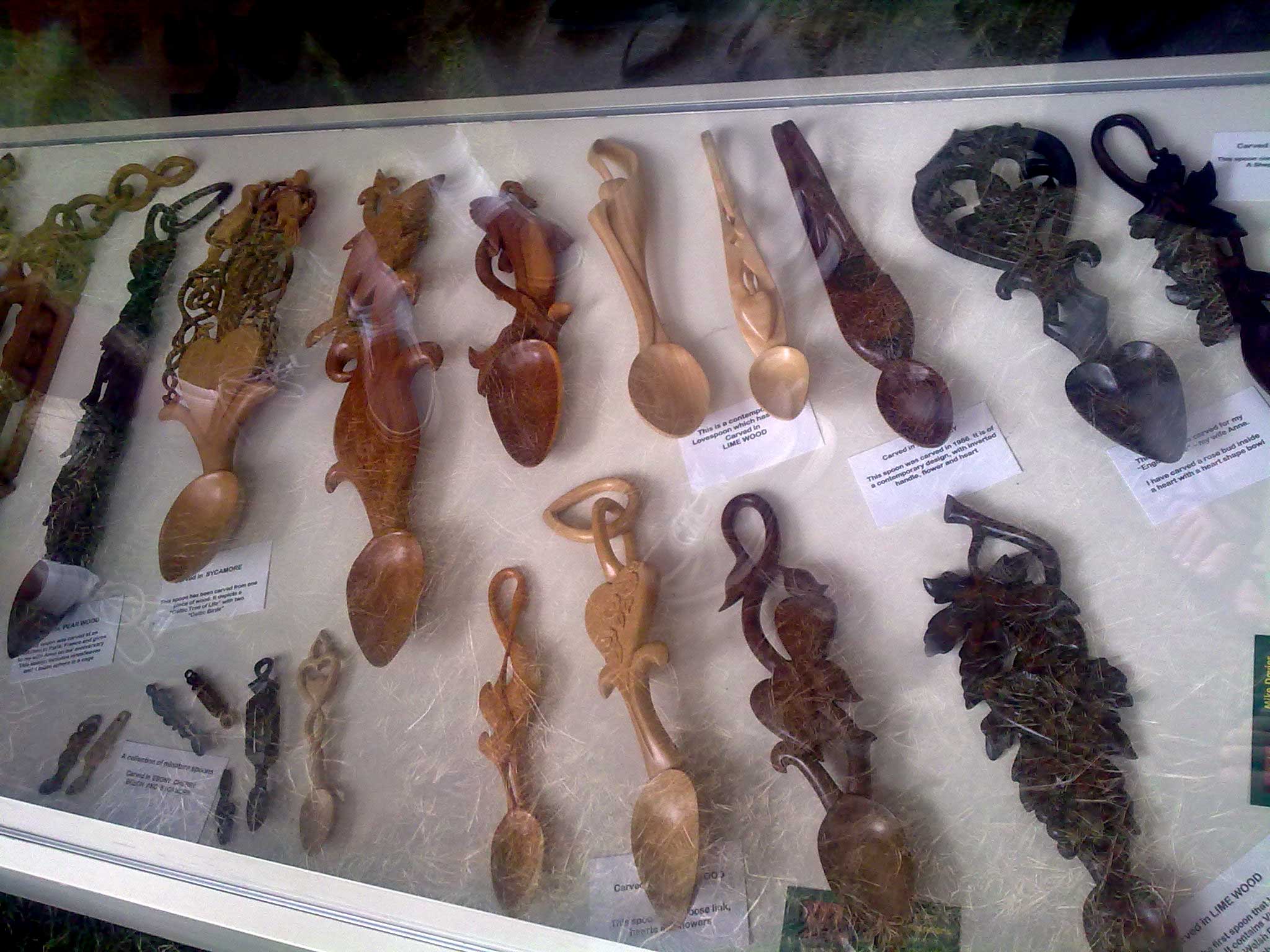 A person named Dwynwen actually existed. She was a princess, the daughter of a Welsh King Brychan Brycheiniog in the AD 400s.

She lived in what is now Brecon Beacons National Park, at a time just after Roman rule in Britain had ended. She died in 465 AD. [2]Johnson, Ben. St Dwynwen’s Day. Historic UK. Accessed February 2021 at https://www.historic-uk.com/HistoryUK/HistoryofWales/St-Dwynwens-Day/

There are many variations of the story about her.

Some versions say she had anywhere from 24 to 36 sisters, but that she was the prettiest.

In one version, her father forbade her to marry a certain man because he wanted her to marry someone else, so she prayed to have her feelings for the one she loved taken away. An angel appeared and gave her a potion to do this.

In the mid 1300s, a poet called on her for help with his love affairs.

A mass dating from the early 1500s says she fled from someone named Maelgwn Gwynedd.

Another poem from around 1500 talked about people doing a pilgrimage to a church dedicated to her.

A full story about her was not written until the 1700s, and it’s quite probable that the writer, Iolo Morganwg (aka Edward Williams, 1747-1826), literally just made most of the actual details of it up.

He told this story:

Dwynwen loved a man Maelon Dafodrill, but he was enraged that she didn’t want sex before marriage, and so he left her. Reputedly in answer to her prayers, God turned him into a block of ice, and gave her three wishes. Her first wish was to thaw Maelon out of pity; her second wish was that for lovers in the future, true love should either be requited or that those who were passionate be cured of their passion. Her third wish was that she should not have to marry.

After Iolo Morganwg’s detailed working of her life, she started to gain in popularity. By the late 1800s, some were calling her the Celtic Venus.

There actually was a church named after her, called Llanddwyn, literally meaning “Church of Dwynwen. It was on (Llanddwyn Island (“Ynys Llanddwyn“), off the coast of Wales. 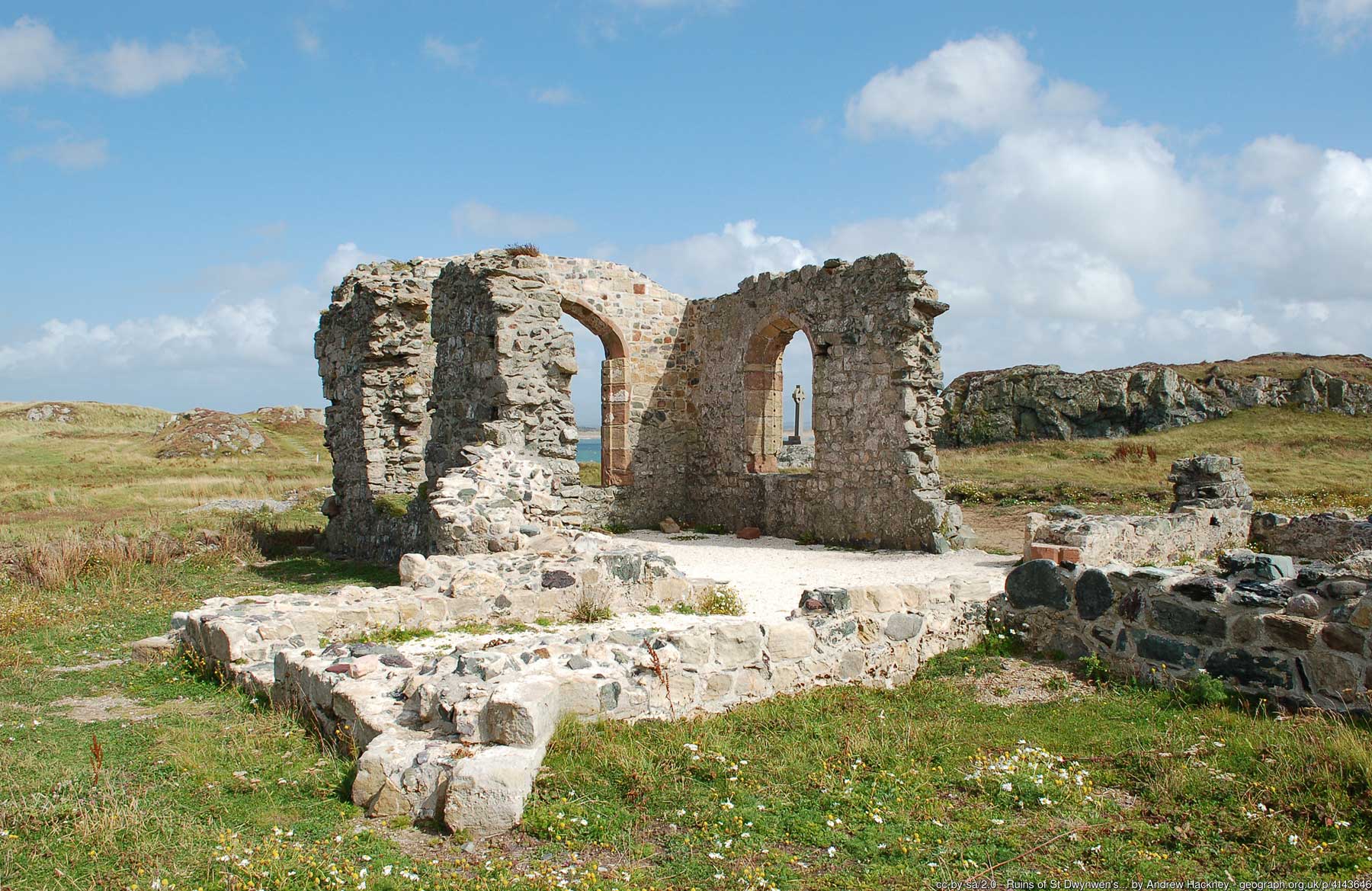 It is not really an island; you can walk there at low tides. Legend has it that she spent much of her time there praying that future lovers would have better luck than her.

There’s a well dedicated to her on the island.

If you see the water boiling it means good luck and love are in your future.

We’re not clear what it means if you see the water boiling while the fish is in it — perhaps dinner is served?

The first St Dwynwen’s Day cards appeared in Wales in the 1960s.

I love you in Welsh is “Rwy’n dy garu di”

St Dwynwen’s Day: Who is Wales’ patron saint of lovers and why is she celebrated on 25 January? ITV News. 25 January 2021. Accessed February 2021 at https://www.itv.com/news/wales/2021-01-25/st-dwynwens-day-who-is-wales-patron-saint-of-lovers-and-why-is-she-celebrated-on-25-january

This web site generates income from affiliated links and ads at no cost to you to fund continued research · Information on this site is Copyright © 2022· Feel free to cite correctly, but copying whole pages for your website is content theft and will be DCMA'd.
Tagged With: Saints, Welsh