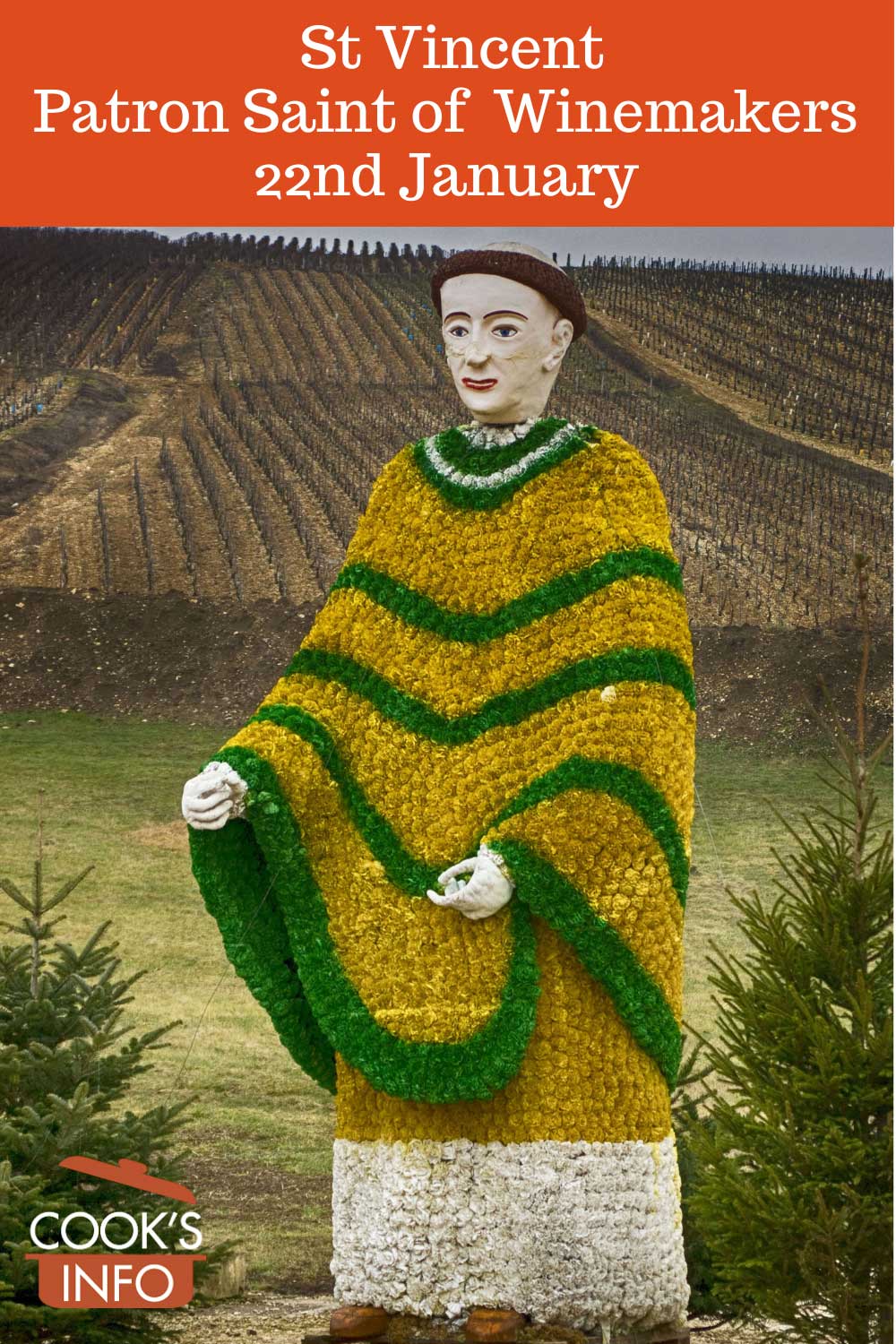 The 22nd of January is the feast day of St Vincent of Sargossa, the patron saint of winemakers.

In Europe, this day marks the approximate half-way point between the grape vines going dormant in the fall, and the first buds appearing in the spring.

To mark the day, there is a parade through the vineyards.

Each village contributes a contingent in the parade, carrying its own effigy of the saint, and banners with the names of wine appellations such as Vosne-Romanée, Chenôve, Mâcon, Puligny-Montrachet, Bouzeron, etc.

The parades will end at a church.

Despite the church element, a lot of the activities are more folk custom or pagan than Christian.

St Vincent’s Day is also celebrated in other European wine producing countries such as Croatia, where the day is variously called “Vincelovo”, “Vincekovo”, or “Vinceška”.

In Croatia, there will typically be a church service, a ceremony to bless the vineyards, bonfires, live music and dancing, food and wine.

History of the celebrations

The tradition in Burgundy originated with a dinner in the evening on the saint’s day.

The current more elaborate form of the celebration was started in 1938 by the Confrérie des Chevaliers du Tastevin. It was first held in Chambolle-Musigny, with six village associations taking part. To the evening dinner, they added daytime activities such as the parade, and a mass.

The celebration was held in the nearby village of Vosne-Romanée in 1939. In 1940, there was just the dinner, owing to the war.

The parade was revived in 1947 in the village of Gevrey-Chambertin.

All the wine used to be free, but to control crowds, they introduced a purchased ticketing system in the early 2000s.

There are food stands that people can buy food at.

The Legend of St Vincent

There are many varying tales of how St Vincent became the patron saint of winemakers.

At least 30 saints are honoured for an association with wine, some just locally in various regions, but St Vincent tends to top the lists.

A simple and direct explanation says that it’s because the first three letters of his name, Vincent, are also the French word for wine, “vin”.

Another simple explanation is that Vincent in French sounds like “vin sang”, meaning “wine blood”.

On pub signs, “O Vincent O” sounded like “au vin sans eau”, meaning, “at the place of wine without water”, or, “we don’t water our wine down”.

St Vincent was born in Spain, in the second half of the 200s, spending most of his life in Saragossa, Spain. He died around 304 AD.

By early medieval times he had already achieved widespread recognition as a patron saint of wine.

This web site generates income from affiliated links and ads at no cost to you to fund continued research · Information on this site is Copyright © 2023· Feel free to cite correctly, but copying whole pages for your website is content theft and will be DCMA'd.
Tagged With: Saints, Wine