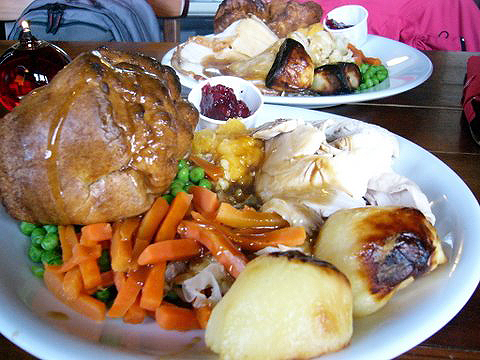 Contents hide
Sunday Roast is traditional in the UK and in Ireland.

It is always served in the early afternoon.

Many North Americans make the mistake of thinking they will hit a pub and get a roast dinner at 5 or 6 in the afternoon, which is when North Americans will have theirs, only to find that meal service has been stopped hours ago.

The name “Sunday Roast” arose in the 20th century. Meat would be left in the oven to roast while people were at church, so that it was ready to eat at lunch time when they got home.

The meat is usually beef, but can be lamb, chicken, pork, goose, etc.

Horseradish sauce will usually be present if the meat is beef; mint sauce if the meat is lamb. Red currant jelly, bread sauce and / or English mustard may also appear.

Many people like to make Yorkshires even if they aren’t having beef.

In making a roast dinner, timing is critical, especially if you only have one oven — and there is far more prep work than may be apparent in the meal. 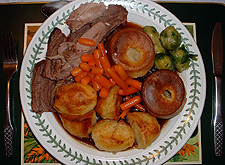 A 2010 survey of commercially-prepared Roast Dinners in the UK, assembled from supermarket ready-meal chiller cabinets or eaten in pubs, found that a typical meal can have in it 150% of the maximum daily salt recommended for an adult, even before you reach for the salt shaker. The survey was done by CASH (Consensus Action on Salt and Health.) [1]

This web site generates income from affiliated links and ads at no cost to you to fund continued research · Information on this site is Copyright © 2023· Feel free to cite correctly, but copying whole pages for your website is content theft and will be DCMA'd.
Tagged With: British Food, Irish Food, Roasting, Roasting Meat