×
You are here: Home / Archives for Austrian Food

Bread dumplings are used for soups and stews in eastern Europe, particularly Austria. They are made from stale bread crumbs (but still fresh as opposed to dried), butter, egg, flour, milk and some herbs such as parsley, along with onion. The onion is sautéed, then all the ingredients mixed together, kneaded a little bit, and…

END_OF_DOCUMENT_TOKEN_TO_BE_REPLACED

Gailtaler Speck is an air-dried, fatty ham made in southern Austria. Essentially, it is lard, with large streaks of lean in it. The outside of the ham is a golden brown. The lean meat inside it comes out a brownish-red colour; the fat portions are white. It has a slightly spicy, smoky and salty taste….

END_OF_DOCUMENT_TOKEN_TO_BE_REPLACED

Goulash is a dish from the days of the Austro-Hungarian empire. Though it started in Hungary, and Hungarians like to claim ownership and denounce any version different from theirs, it became a dish bigger than them, a dish of the Empire in which they were partners, Variations emerged in different parts of the empire. All…

END_OF_DOCUMENT_TOKEN_TO_BE_REPLACED 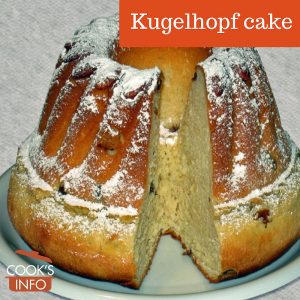 Kugelhopf cake is a yeast-risen cake made in Central Europe, and particularly in Alsace. The cake can be sweet or savoury. It is baked in special decorative tube moulds.

Pumpkin Oil is an oil extracted from pumpkin seeds. In south-eastern Austria, in the area called “Styria” (or “Steiermark” in German), farmers have developed a variety of pumpkin whose seeds contain a sweet, nutty tasting oil known as “Kürbiskernöl.” The pumpkins don’t grow much larger than 12 inches (30 cm) wide. Each pumpkin will have…

END_OF_DOCUMENT_TOKEN_TO_BE_REPLACED 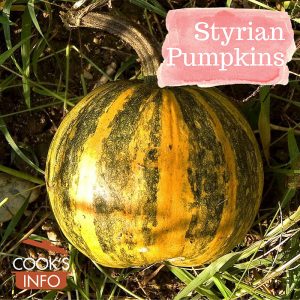 Styrian pumpkins are pumpkins grown in Austria that are cultivated primarily for their seeds, from which a valuable oil is extracted. The flesh can also be eaten.

Tafelspitz is an Austrian boiled dinner, consisting of beef simmered with root vegetables. It takes its name of “Tafelspitz” from the cut of beef used, which is also called Tafelspitz. This means, literally, “table tip.” [1] In practice in Austria, many people now use other cuts of beef as this cut is in high demand…

END_OF_DOCUMENT_TOKEN_TO_BE_REPLACED

Wiener schnitzel is a Middle European dish consisting of veal thinly sliced (a veal “scallop”) dredged in flour, dipped in seasoned egg and milk mixture, coated with fresh bread crumbs and fried in butter. The veal cutlets are cut about as thick as a finger when starting, then they are pounded flat. Recipes will vary,…