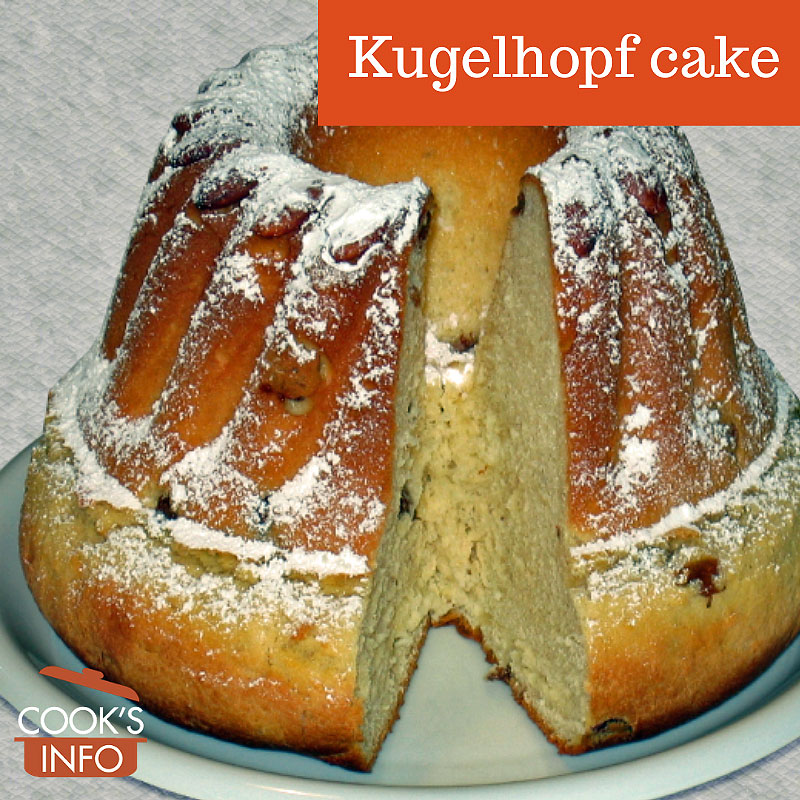 A kugelhopf cake is a German yeast-risen sweet, rich bread baked in a special fluted tube pan called a kugelhopf pan. There will usually be nuts, candied fruits, and raisins or currants in the dough.

The Penguin Companion to Food says,

“A rich, light, delicate yeast cake, made from flour, eggs, butter, and sugar, is related to brioche, baba, and savarin. It contains raisins and may be flavoured with lemon peel or decorated with slivered almonds.” [1]Mason, Laura. In:  The Penguin Companion to Food. London: The Penguin Group, 2002. Page 524.

“The real McCoy is much closer to bread than to cake, made with yeast, flour, very little sugar and salt, small amounts of butter and, if it is a ”rich man’s kugelhopf,” a few eggs, an expensive ingredient not found in a ”poor man’s kugelhopf.” I … decided that I preferred the richer Austrian-German interpretation, with its grated orange and lemon peel, candied fruit and a hint of vanilla…” [2]Sheraton, Mimi. In Alsace, a Pastry With Heart and History. New York: New York Times. 23 December 1998. Section F, Page 3, col. 1.

A version in New Orleans, started at Maurice’s in 1990, adds sour cream to make it moister.

It has a crisp surface, and is dry, so it is eaten with coffee, tea or wine to wash it down. Writing for Gastronomica Journal, Sharon Hudgins says:

“Throughout the year, in cities and rural areas, Kugelhopf is traditionally served for breakfast, especially Sunday breakfast, with steaming-hot cups of café au lait. Kugelhopf is also eaten in the afternoon with coffee or tea; for dessert after lunch or dinner; and at any time of the day as an accompaniment to a glass of chilled Alsatian Riesling, Muscat, or Gewürztraminer wine, a flute of sparkling Crémant d’Alsace, or a small glass of ice-cold Kirsch.” [3]Hudgins, Sharon. Alsatian kugelhopf: A cake for all seasons. University of California: Gastronomica. Vol. 10, No. 4, pp 62-66. ISSN 1529-3262. 2010. Page 65. 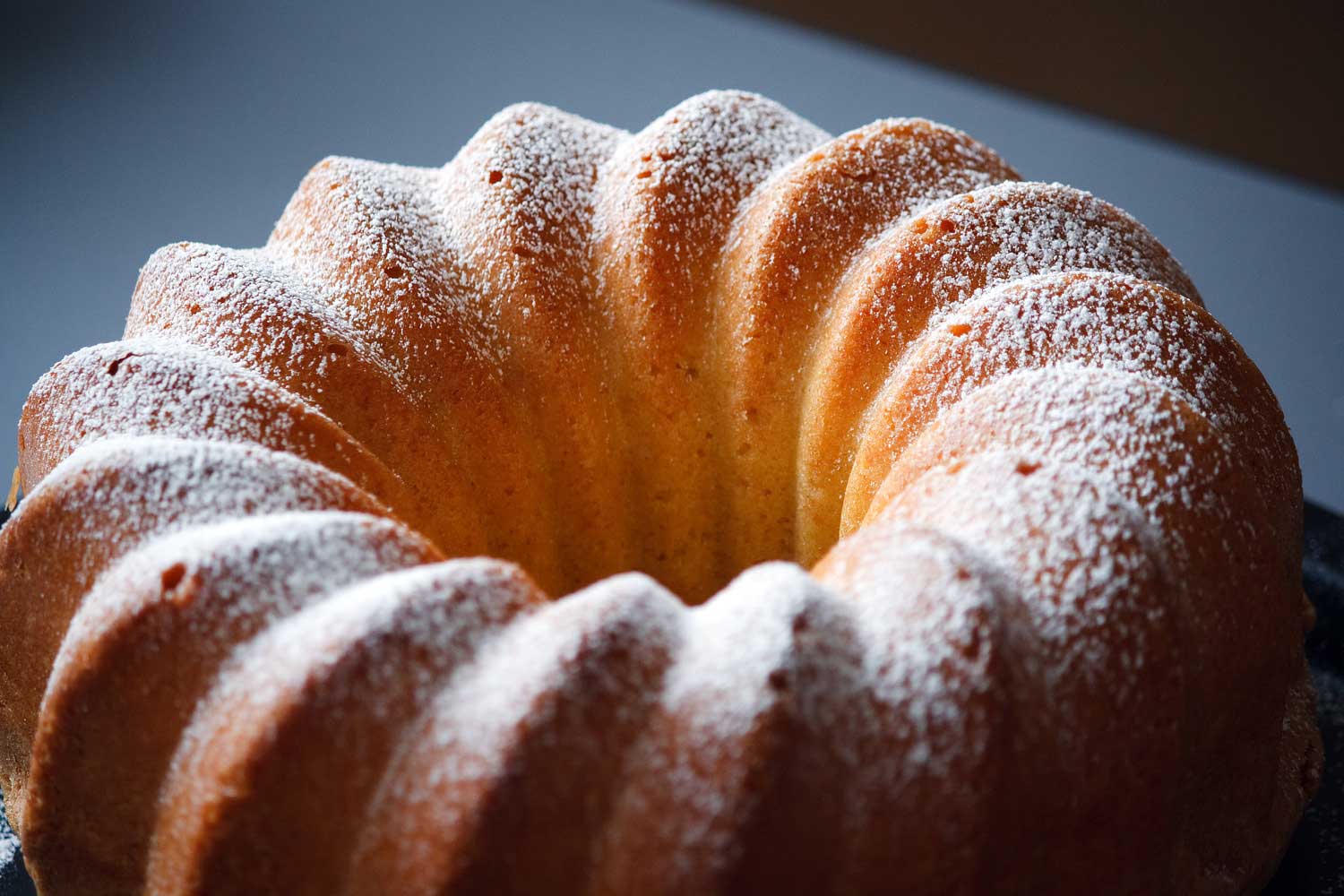 Some people are surprised when they learn that there is also a savoury version of this cake, called Kugelhopf salé in French:

“One classic variation, however, is the savory kugelhopf, enriched with bits of smoky bacon and crunchy walnuts, which is meant to be served with aperitifs.” [6]Sheraton, Mimi. In Alsace, a Pastry With Heart and History. New York: New York Times. 23 December 1998. Section F, Page 3, col. 1.

This version is more likely to be served with an alcoholic beverage.

“When Kugelhopf is served with wine, eau-devie, cocktails, or other apéritifs, the savory version called Kugelhopf salé (“salted” instead of sucré, “sweetened”) is sometimes offered. Kugelhopf salé is made with less sugar and a bit more salt than the sweet variety, with diced smoked bacon replacing the raisins, and walnuts instead of almonds. This kind of cake is also known as Kugelhopf au lard or Spackkougelhopf (bacon Kugelhopf) [7]Hudgins, Sharon. Alsatian kugelhopf: A cake for all seasons. Page 65. 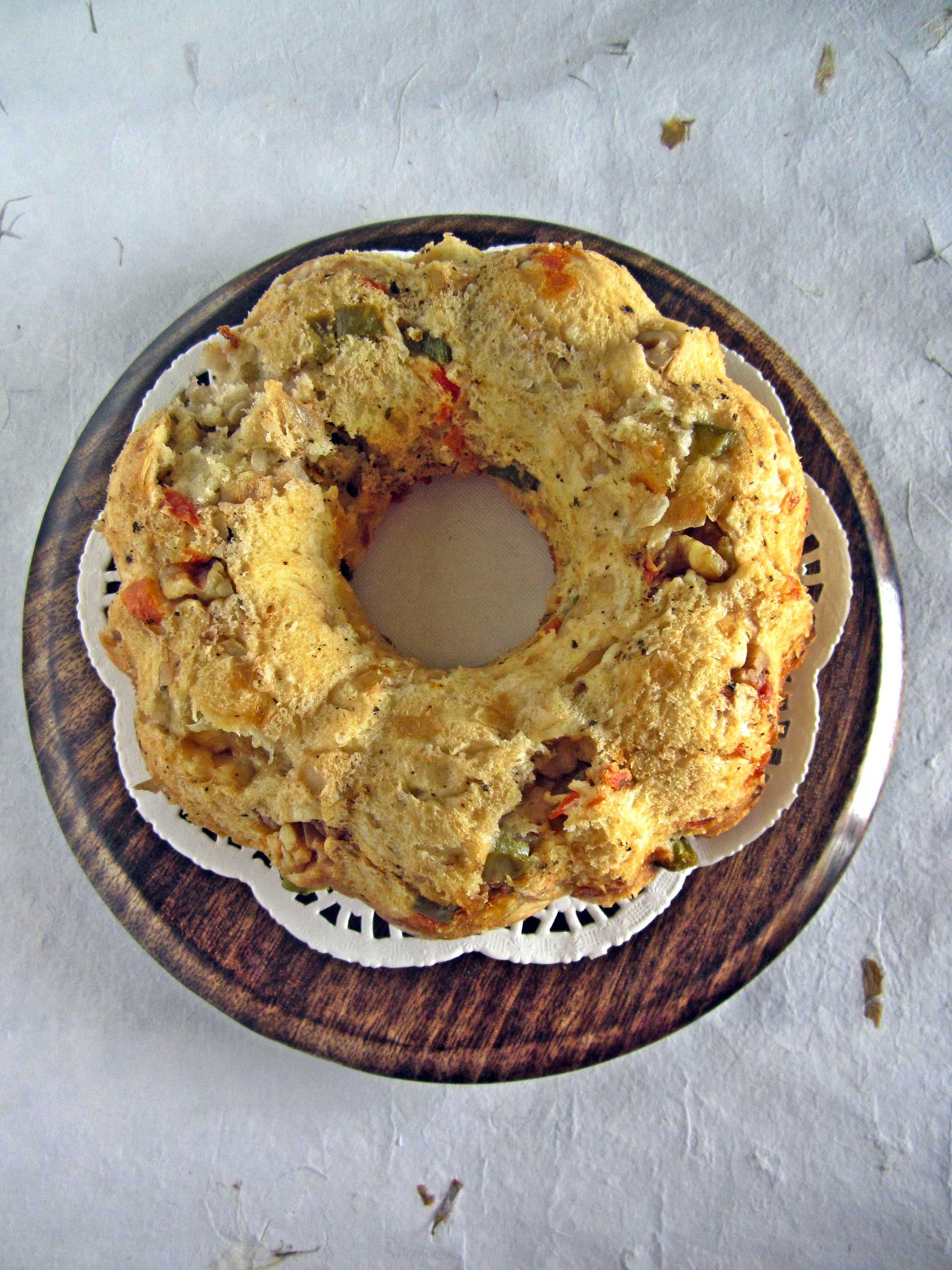 The Alsatian version of kugelhopf uses raisins, kirsch, and flaked or slivered almonds. The dough has yeast in it, and is allowed to rise for about 2 hours. A pan with crown-shaped moulding at the bottom is lined with flaked almonds, then the dough is punched down, put in the pan, let rise again for another 2 hours, then baked. When inverted, it comes out of the pan crown-shaped, and the flaked almonds decorate the surface.

On the first Sunday of June, a Fête de Kugelhopf is held in Ribeauvillé, Alsace, France.

“Both the sweet and savory versions are featured at the annual Kugelhopf festival in Ribeauvillé, held on the first weekend in June, when Kugelhopfs are paraded through the streets to much fanfare.” [8]Hudgins, Sharon. Alsatian kugelhopf: A cake for all seasons. Page 65. [9]The festival may not be every year. A blog post in 2011 noted that it was cancelled that year owing to lack of interest in participating by bakers: “their annual “Fête du Kougelhopf” was unfortunately canceled this year (sadly not enough bakers wanted to participate)”. Kerrin Rousset. A Pilgrimage to Alsace June 2011. Accessed August 2020 at http://mykugelhopf.ch/2011/06/ribeauville/

“It seems that the Magi, or Three Kings, were walking from Bethlehem to Cologne — don’t ask why — and were very tired when they got to the hilly wine village of Ribeauvillé in Alsace. There they received hospitality from a pastry chef, one Mr. Kugel. In appreciation, they later baked a cake in the turban shape and gave it their benefactor’s name.” [10]Sheraton, Mimi. In Alsace.

When is kugelhopf served?

The Alsatian version is mostly served at breakfast: “In Alsace, kugelhopf is eaten at Sunday breakfasts, and traditionally prepared the night before, as it is always better when slightly stale. It goes well with Alsace wines.” [11]Lang, Jennifer Harvey, ed. Larousse Gastronomique. New York: Crown Publishers. English edition 1988. Page 599.

In Austria, a particularly rich version of it may be served at afternoon tea.

Kugelhopf in Alsace was also associated with weddings, both Christian and Jewish. It was the tradition at a wedding for a bride’s mother to make several kugelhopf cakes and give them to the officiating minister (priest, pastor or rabbi) and to any other notables at the wedding.

“Andre Soltner, the son of Alsace who cooked his way to fame at Lutece, said that in olden days, a piece of kugelhopf with wine for men and coffee for women was served before the lengthy marriage ceremonies held in churches and synagogues. The bride’s mother also baked a kugelhopf for the priest, pastor or rabbi, the mayor and schoolteacher, the midwife and neighbors, as tokens of good will in case their help was ever needed.” [13]Sheraton, Mimi. In Alsace.

Sometimes people who gave wedding gifts would get a cake as a thank you for the gift:

“In earlier times a bride’s mother made special Kugelhopfs for important people in the town, from the mayor to the midwife, to ensure their future goodwill toward the new couple. To celebrate weddings and baptisms, rich peasants distributed dozens of small Kugelhopfs to everyone in their village. Kugelhopf was served at prenuptial dinners and at the wedding feast itself. Afterward, the bride’s mother might also take a Kugelhopf to everyone who gave a gift to the newlyweds, as a token of thanks from the family.” [14]Hudgins, Sharon. Alsatian kugelhopf: A cake for all seasons. Page 65.

The history of kugelhopf

No one knows for sure where kugelhopf cake started, but both Germany and Austria claim it as their own, and there are the usual claims of Marie Antoinette introducing it from Austria into France: “It is said that Marine Antoinette’s fondness for this type of dough made such cakes very fashionable.” [15]Larousse Gastronomique. 1988.

The Larousse Gastronomique (1988 edition) says that it was of Austrian origin but acclimatized to France by the pastry chefs in Paris:

“A yeast cake from Alsace, of Austrian origin, containing raisins or currants and cooked in a special high crownlike mould… Some authorities consider that it was Carême who popularized the cake in Paris, when he was pastry chef at the Avice… Others claim that the first pastry cook to make true kugelhopfs in Paris was a man named Georges, who was established in the Rue de Coq in 1840.” [16]Larousse Gastronomique. 1988.

Some wags say that it may actually have originated in Switzerland, perhaps infuriating all sides.

It may never be clear what the name kugelhopf actually means. The “kugel” part may come from the Latin word, “cucullus”, meaning hood or bonnet; the “hopf” part, some speculate, may mean “to hop”. Following that train of thought, it could be a “jump over the hat” cake.

Penguin Companion to Food says, “… spelling and pronunciation vary, tending to be kugelhopf at the western edge of its range, and gugelhupf in the east…. Lesley Chamberlain (1983) draws attention to the link between the name kugelhopf and the Jewish kugel, a kind of round, firm, sweet or savoury pudding. Both terms refer to something round, and both seem related to the German Kugel, meaning a ball or something round.” [18]Mason, Laura. Penguin Companion to Food. 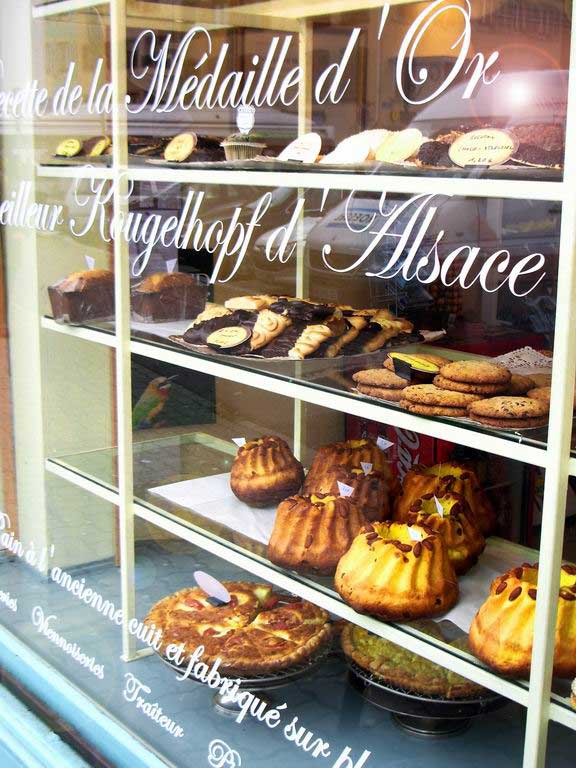 This web site generates income from affiliated links and ads at no cost to you to fund continued research · Information on this site is Copyright © 2022· Feel free to cite correctly, but copying whole pages for your website is content theft and will be DCMA'd.
Tagged With: Alsatian Food, Austrian Food, Bundt Cakes, German Food