×
You are here: Home / Archives for French Butters 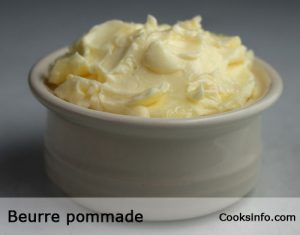 Beurre Pommade © Randal Oulton Beurre pommade is butter that has been let come to room temperature (20 to 30 Celsius / in the 60s F range) so that it is quite soft, like a face cream. If you wish, think of it as butter that has softened to the point that it is spreadable….

END_OF_DOCUMENT_TOKEN_TO_BE_REPLACED

This is an in-joke amongst cooks: it’s oil. Butter isn’t used in Marseille very much; oil is used instead.

END_OF_DOCUMENT_TOKEN_TO_BE_REPLACED

Semi-salted butter is butter with some salt in it, but not enough to meet the legal definition of salted. In France, it means .5 to 3% of salt has been added. In America and South Africa, it means the butter is 1% salt.

Three-Quarter Fat Butter is a term used in France, Switzerland, Germany and in the UK. It means the butter will have three-quarters of the 80 to 82% butterfat content that it normally would. Therefore, the butterfat content will be between 60 and 62%. [Ed. just to be clear, not 3/4 of 100%, but 3/4 of…