×
You are here: Home / Archives for Home canning 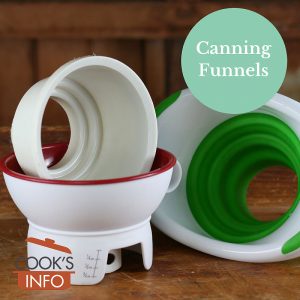 Canning funnels are designed to rest securely in the mouths of canning jars. They allow an easy, precise flow of semi-solid or solid food stuffs through into the jar while keeping the rim and neck of the jar clean. 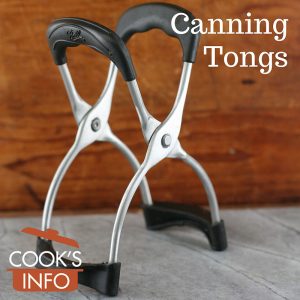 Canning tongs are used to put filled preserving jars into canners, and remove them after heat processing. They are specially designed to be able to fit around the wide necks of preserving jars, and grip them enough to lift them securely.

Clearjel is a modified starch thickener. Some types of it are sold already cooked, and able to thicken food instantly without the usual cooking needed with starch. It can be added to hot or cold liquids. If liquids are cold, it will reach its maximum thickness in 10 minutes. Products made with it survive freezing…

END_OF_DOCUMENT_TOKEN_TO_BE_REPLACED

Pickling is a preserving process that can be applied to vegetables, meat, fish, eggs, fruit and even nuts. It also adds flavour to the item being preserved, and can transform one food item, such as cucumbers, into another, such as “pickles.” The following discussion of pickling provides general guidelines only, and is only a broad…

END_OF_DOCUMENT_TOKEN_TO_BE_REPLACED 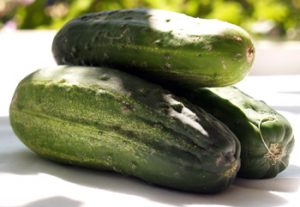 Pickling Cucumbers © Denzil Green Pickling is the only practical way to preserve cucumbers. They don’t freeze or dry well. Pickling cucumbers, though, are the only kind of cucumbers that won’t go mushy when canned, because they start off really firm and crisp. Regular cucumbers for fresh eating are called, in contrast, “slicers.” You can…

END_OF_DOCUMENT_TOKEN_TO_BE_REPLACED

Pickling lime is calcium hydroxide. It’s also called “food-grade lime”, because in making the calcium hydroxide the processors make sure that the process remains pure and doesn’t introduce anything untoward (e.g. it’s not done in rusty old bins.) Pickling lime helps to improve the firmness of pickles by introducing calcium that reinforces the pectin in…

END_OF_DOCUMENT_TOKEN_TO_BE_REPLACED 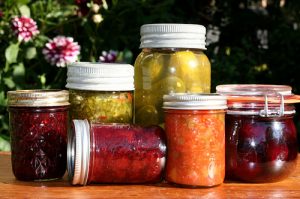 Preserves © Denzil GreenPreserves are vegetables or fruit that are preserved, either whole or in uniformly-sized distinguishable pieces, usually in a sealed jar or tin, to extend their storage life. Many people’s grandmothers used to have a cellar of preserves, on which there were shelves of jars containing pickles, relishes, pickled peppers, chutneys, jams, jellies…

END_OF_DOCUMENT_TOKEN_TO_BE_REPLACED

Sterilizing jars can be a necessary procedure for preserving food in jars. It helps ensure the destruction of microbes that could either degrade the food, or render the food dangerous to eat, or both. Modern lab research has shown that it is not necessary to sterilize: if you will be using a pressure canner to…