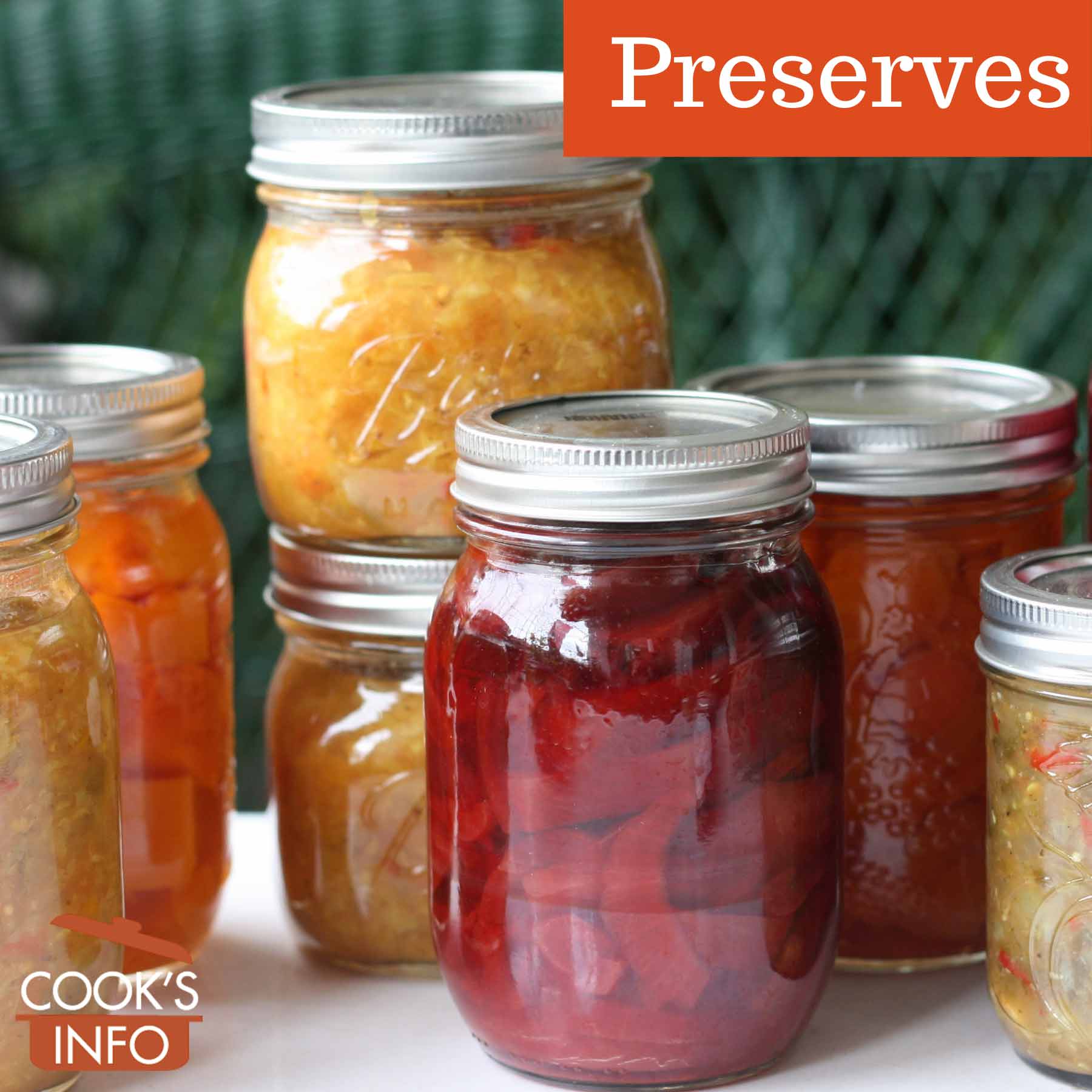 The act of preserving food transforms the food item being preserved into a different product.

Sometimes the goal is to keep the finished product as close as possible to the fresh, as is the case with frozen sweetcorn. Other times, the goal is to transform it into a completely new product, such as corn relish.

Almost all recipe books used to always contain at least one chapter on preserving food.

Preserved food now forms a huge part of our daily diet. Food preservation extends food’s nutritional qualities, palatability, and storage life while also keeping it safe for consumption. Preserved food which is no longer safe to eat is by definition no longer preserved; it has spoiled.

As for the word “preserves” itself, there is a both broad and a narrow sense for the definition of it in current English usage. Both are distinct from the much larger category of preserved food.

Broadly, and colloquially, the word “preserves” is used by laymen to refer to vegetables or fruit that are preserved, either whole, chopped, diced, or puréed, usually in a sealed jar or tin. It can apply to everything from pressure canned low-acid foods such as vegetables and meats, to chutneys, relishes, jams, jellies, and jars of fruits such as peaches or apples.  [1]In the following example, Pennsylvania State Extension Service uses preserves in its broader sense, referring to jams and jellies as preserves: “Stiff jams or jellies can be thinned with water or fruit juice and reprocessed… An alternative use for hard-gelled preserves is to carefully melt them on the stove or in the microwave before using them as a meat glaze, a spread for pancakes, or a topping for ice cream.” — Zepp, Martha, et al. Let’s Preserve: Jelly, Jam, Spreads. PennState Extension Service. 5 September 2019. Accessed April 2021 at https://extension.psu.edu/lets-preserve-jelly-jam-spreads

Narrowly, in the field of food preservation itself, the word “preserves” is reserved to refer to fruit preserved in a specific manner to result in a specific product of fruit preserves. These are fruits, either whole or in large chunks, which have been preserved in a sugar solution in combination with heat processing of the sealed jars. The preparation and processing can be done either at home or commercially.

The National Center for Home Food Preservation lists this definition for preserves:

“Preserves are small, whole fruit or uniform size pieces in a clear, slightly gelled syrup. The fruit should be tender and plump.” [2]National Center for Home Food Preservation. Making Jams and Jellies. Accessed April 2021 at https://nchfp.uga.edu/how/can_07/types_jellied_products.html

Low-sugar and sugar-free versions of preserves are now also made. Typically these will use non-caloric sweeteners, in combination with gelatin or special pectin that can gel without sugar and to which mould inhibitors have been added. [4]Morris, William C. Low or No Sugar in Jams, Jellies and Preserves. University of Tennessee Agricultural Extension Service. May 2004. SP325-F.

Fruit preserves differs from jam, where the fruit is mashed, and from jelly, which is fruit boiled down and strained so that just the juice is used to make a clear and smooth spread.

The social impact of food preservation

Food preservation done on a mass scale by the food-processing industry may be what has negated Malthus’s dire predictions about the human population becoming too big and imploding on itself.

Up until the mid-1800s, canned goods remained a food only for the rich, as they were far more expensive than the fresh items. Preserving allowed food items to be available to chefs twelve months a year, if their customers could afford to pay for it — these were luxury items.

Before preserving and the food industry, foodies dreamed of what was out of season, and getting it had snob appeal for them. Now that even the unwashed masses can have what is out of season thanks to preserving, foodies have decided to focus instead on unpreserved food that is local and in season.

Foodies now may instinctively sniff at preserved food, unless it is called “pâté” or confit.

Preserving fruit in sugar began in the Middle East thousands of years ago.

At the beginning of the 1700s, Denis Pepin, a French scientist, began experimenting with cooking food in sealed jars, and with putting raw food in sugar syrup in sealed glass jars. He told a German scientist, Gottfried Wilhelm von Liebnitz, about his work. Liebnitz suggested that such preserved food could be used as army rations.

Nicolas Appert, however, was the first to put the idea into commercial practice. He ran a confiserie shop in Paris from 1789 – 1795. He sterilized the food in sealed glass jars by processing the jars in boiling water. In 1804, he set up a factory to make preserved food in tin cans. He started with meat.

In 1806, the quality of his products were praised by Grimod de la Reynière in his “Almanach des gourmands”. Grimod particularly noted how green and flavourful Appert’s peas were. Previously, the taste of the item preserved changed dramatically because of the sugar, salt or vinegar used to preserve it. Now, with improved canning techniques, a taste closer to the “natural” item could be preserved. Appert’s products were expensive and desirable.

Appert, though, didn’t use tins, but rather bottles stoppered with five layers of cork.

But Liebnitz had been right: at the time in France, the idea really only had importance for the military. France had access to fruit and vegetables year round owing to its warm south, and its colonies in North Africa.

The Englishman Peter Durand obtained a patent in 1810 for a cannister made of iron, and coated with tin, to preserve food in. Durand chose to experiment with metal because it wouldn’t be vulnerable to the breakage that Appert’s glass bottles were. The tins were made by hand from three pieces of metal soldered together: the top, bottom and the sides. A good workman might produce 6 empty tins an hour. The patent was purchased by Bryan Donkin and his brother-in-law John Hall for 1,000 pounds. John Hall also owned Dartford Iron Works, which could supply the iron for the tins, which no doubt made him doubly interested. They combined Appert’s method with Durand’s tin can, and two years later, they opened a food canning factory on Blue Anchor Road (now called Southwark Park Road) in Bermondsey in south London. By the following year, 1813, they were supplying the British army with tinned rations. By 1818, they were joined by a J.H. Gamble and became Donkin, Hall and Gamble. The firm was bought out by Crosse & Blackwell sometime before 1850. [5]Clow, Archibald and Nan L. The Chemical Revolution: A Contribution to Social Technology. London: Taylor & Francis. 1992. Page 577.

It was the Germans who took the idea and ran with it commercially. By the 1850s, the German cities of Braunschweig and Lübeck were processed food centres. A side effect was the development of farms specialising in certain crops, such as asparagus, green beans, and peas to supply the factories. In turn, it was worthwhile for inventors to develop specialized machines to plant and harvest these single crops.

What turned food preserving into a food processing industry was the massness of the scale, methods that were reliable and repeatable, and metal cans that enabled easy shipping.

On 2 October 1866, an American, J. Osterhoudt of New York City was granted a patent for a tin can that could be opened with a key.

At the start of the 1900s, tinned food was still associated with luxury items.

According to Ambrose Heath, in his 1939 book “Open Sesame: The Way Of A Cook With A Can”, canned goods in the UK then offered consumers 90 kinds of fish, 97 varieties of fruit, 100 kinds of vegetables, and 218 types of meat.

Many people’s grandmothers and great-grandmothers used to have a cellar of preserves, in which there were shelves of jars containing pickles, relishes, pickled peppers, chutneys, jams, jellies and whole fruits that would shine like jewels when the cellar light was turned on.

“After home canning came into fashion, a new sort of pickle arose. Stored in vacuum-sealed jars, vegetables could keep for a long time in a dilute vinegar solution, even if salt and sugar were omitted entirely. Home canning reached a peak during World War II, when the US government commandeered 40 percent of commercial pickle output for the armed forces. Extension agents promoted food preservation along with Victory Gardens, even going so far as to divert steel from the munitions industry to pressure-canner production. ‘Novice canners using shoddy wartime equipment also produced a record number of disasters,’ writes Harvey Levenstein (Paradox of Plenty, 1993). ‘Innumerable stoves were ruined, kitchens were splattered, and victims were hospitalized with severe burns, cuts and botulism.’ If US Department of Agriculture (USDA) guidelines today seem to be based on the assumption that the typical home canner won’t follow half of them, this history should explain the government’s conservatism. Actually, even after their boiling-water baths, USDA-style pickles generally taste much fresher than their nineteenth-century predecessors.” [6]Ziedrich, Linda. The Joy of Pickling. Boston, Massachusetts: The Harvard Common Press. 2009. Page 5

Parker Bowles, Tom. Steak-and-kidney pud and artichoke hearts – some of the best food really does come in a tin. London: Daily Mail. 2 November 2009.

This web site generates income from affiliated links and ads at no cost to you to fund continued research · Information on this site is Copyright © 2022· Feel free to cite correctly, but copying whole pages for your website is content theft and will be DCMA'd.
Tagged With: Fruit, Home canning, Pickling