×
You are here: Home / Archives for Potato Dishes 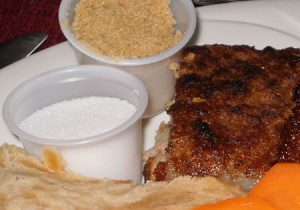 Pâté Râpé, accompanied by brown and white sugar © Diane Langlois Pâté Râpé (aka “Rappie Pie”) is an Acadian baked potato dish made in Nova Scotia and Prince Edward Island. It is sort of like a baked hash. It is made from diced fatty pork, chopped onion, potatoes, egg, salt and pepper. Some of the…

END_OF_DOCUMENT_TOKEN_TO_BE_REPLACED

Potato Korv is a mild-tasting Swedish sausage made of pork, beef (and sometimes veal as well), along with onion, milk, parboiled grated potato, and allspice. It is made in links. Cooking Tips The sausages are sold raw and need full cooking.

A creamed potato and leek soup, served cold. Cream and onions are also used. Often serve topped with chopped chives. Cooking Tips Good as a refreshing summer soup. History Notes Vichyssoise is thought of as French food, but it’s actually an American creation. It was invented in New York City in 1917 by a chef…