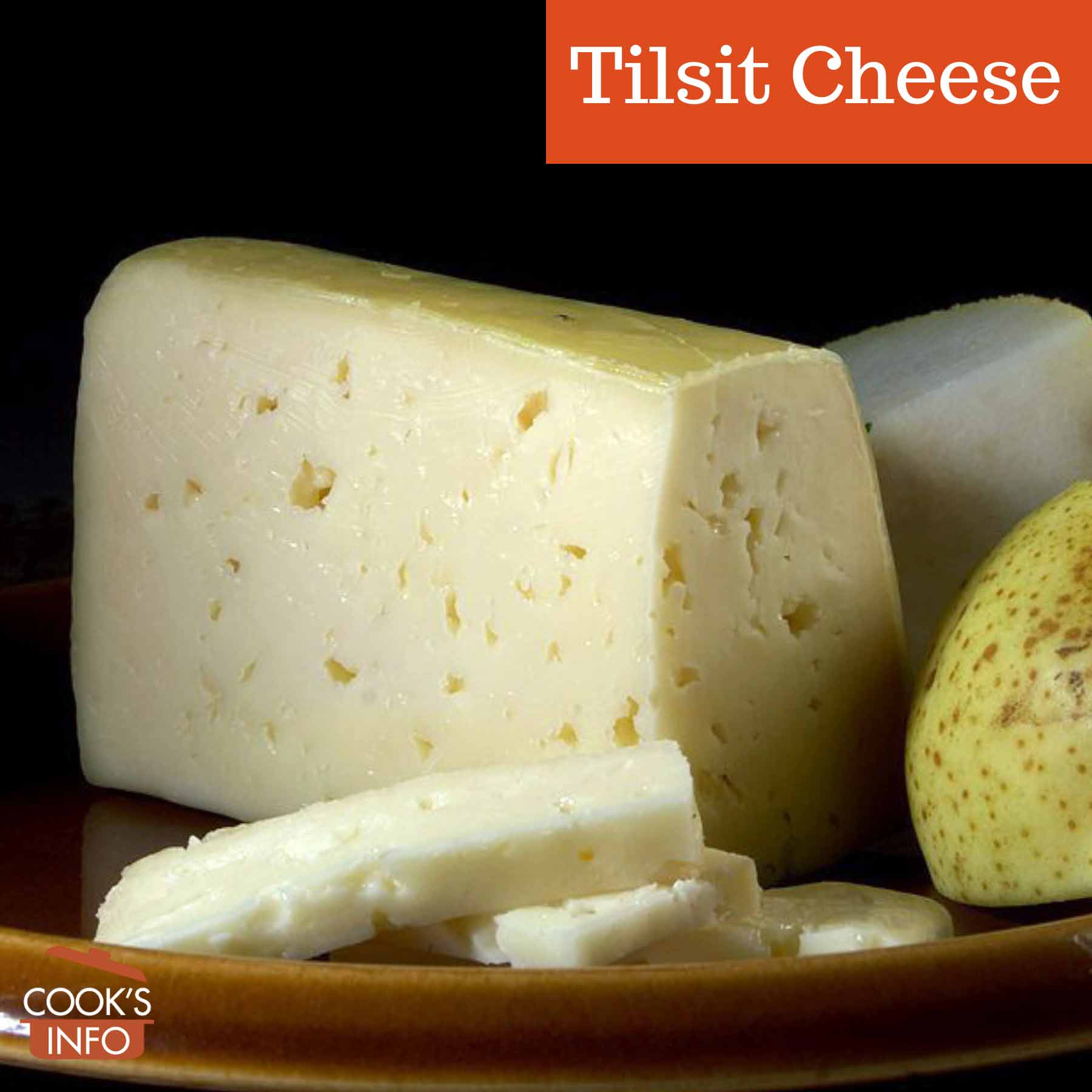 Tilsit cheese is a creamy, semi-firm cheese. In texture it is similar to Havarti, but it has a richer taste.

It is made from cow’s milk. The milk is usually partially-skimmed, but sometimes whole. The milk may or may not be pasteurized, depending on where the cheese is made.

Tilsit is made in many countries.

The whey is drained off, then the curd is packed (but not pressed) into moulds. The moulds are drained for a day, and turned several times during that. The cheeses are then removed from the moulds, and either rubbed with salt or dipped in brine.

The cheeses are dried, and then aged on shelves during which time they are wiped with brine and turned. The rind turns yellowish with a mould and then reddish. The mould is wiped off from time to time. The cheeses are aged either 2 to 3 months, or 5 to 6 months. (Note: In Slovenia, Tilsit is sold as an unaged, fresh cheese.)

In Switzerland, where production of the cheese started in 1893, the milk comes from cows in the cantons of Thurgau, St. Gall and Zurich. A red label on the cheese means raw milk, a green label means pasteurized milk, a yellow label means cream added, and a blue label means ¼ fat.

Tilsit cheese dates from the 1700s. The story is that it was invented in Prussia by Dutch immigrants in Tilsit, East Prussia actually trying to make gouda.

The recipe spread to many other countries: Austria, Denmark, Germany, Slovenia and Switzerland.

The town of Tilsit is also famous for the Treaty of Tilsit in 1807, signed by Napoleon, Alexander I of Russia and Frederick William III of Prussia. France made peace with Russia (temporarily — until 1812) and gave Russia a free hand in Finland. Tilsit was transferred to Russia from Germany at the end of the Second World War in 1945. Though Tilsit has disappeared off the map, being now a town called “Sovetsk” in the Kaliningrad area of Russia, Tilsit cheese is still made there and called that.

This web site generates income from affiliated links and ads at no cost to you to fund continued research · Information on this site is Copyright © 2022· Feel free to cite correctly, but copying whole pages for your website is content theft and will be DCMA'd.
Tagged With: German Cheeses, German Food, Swiss Food