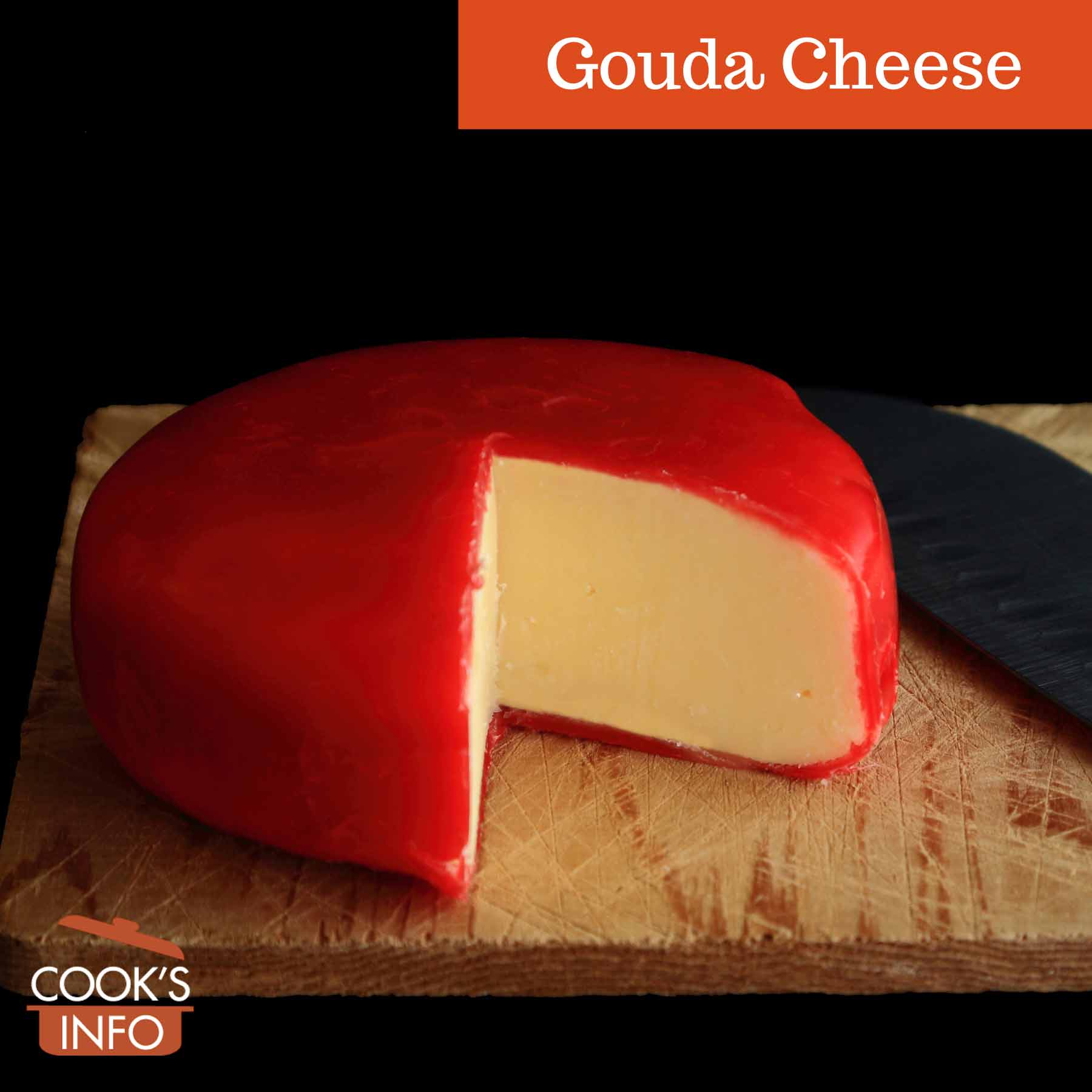 Gouda cheese is a hard cheese made from whole cow’s milk.

It is mild tasting and pale yellow with a hard rind.

Typically it is coated in red wax, though variations may be coated in black, brown or yellow wax. There is no regulation governing the wax colouring: it is just custom.

Most Gouda is factory produced, though some dairies still produce artisanal varieties of it. Some Gouda can be flavoured; in the Netherlands there is a variety flavoured with nettles called “brawdnettel kaas“.

Aged Gouda is usually aged at least 1 ½ years. It is a firmer cheese with a sharper taste. In Europe, it is coated in black wax to identify it. In North America, it is covered with yellow or clear wax.

To make Gouda, the milk has starter bacteria added to it, and is then heated to help the curds separate from the whey. The curds are pressed into circular moulds for a few hours, then soaked in brine.

The cheeses are then removed from the moulds, dried for a few days, then coated in wax and aged for at least a few weeks.

Bel Paese, Edam, Muenster. Gouda, however is widely available and quite affordable, so any place that doesn’t have it probably won’t have any of these, either.

Gouda can be frozen, but best used for cooking after thawing as it will be crumbly.

Gouda cheese is named after the Dutch city of Gouda in the province of Zuid-Holland (South Holland), 24 km (15 miles) from Rotterdam. Gouda became a city in 1272, receiving a charter from Count Floris the Fifth.

The philosopher Desiderius Erasmus was born in and lived in Gouda in the 1500s.

Gouda cheese is not related at all to the former state of Gouda in India, which in 1947 became part of the modern Indian state of West Bengal.

Gouda is capitalized in English because it is named after a place.

This web site generates income from affiliated links and ads at no cost to you to fund continued research · Information on this site is Copyright © 2022· Feel free to cite correctly, but copying whole pages for your website is content theft and will be DCMA'd.
Tagged With: Dutch Cheeses, Dutch Food, Sweet Curd Cheeses