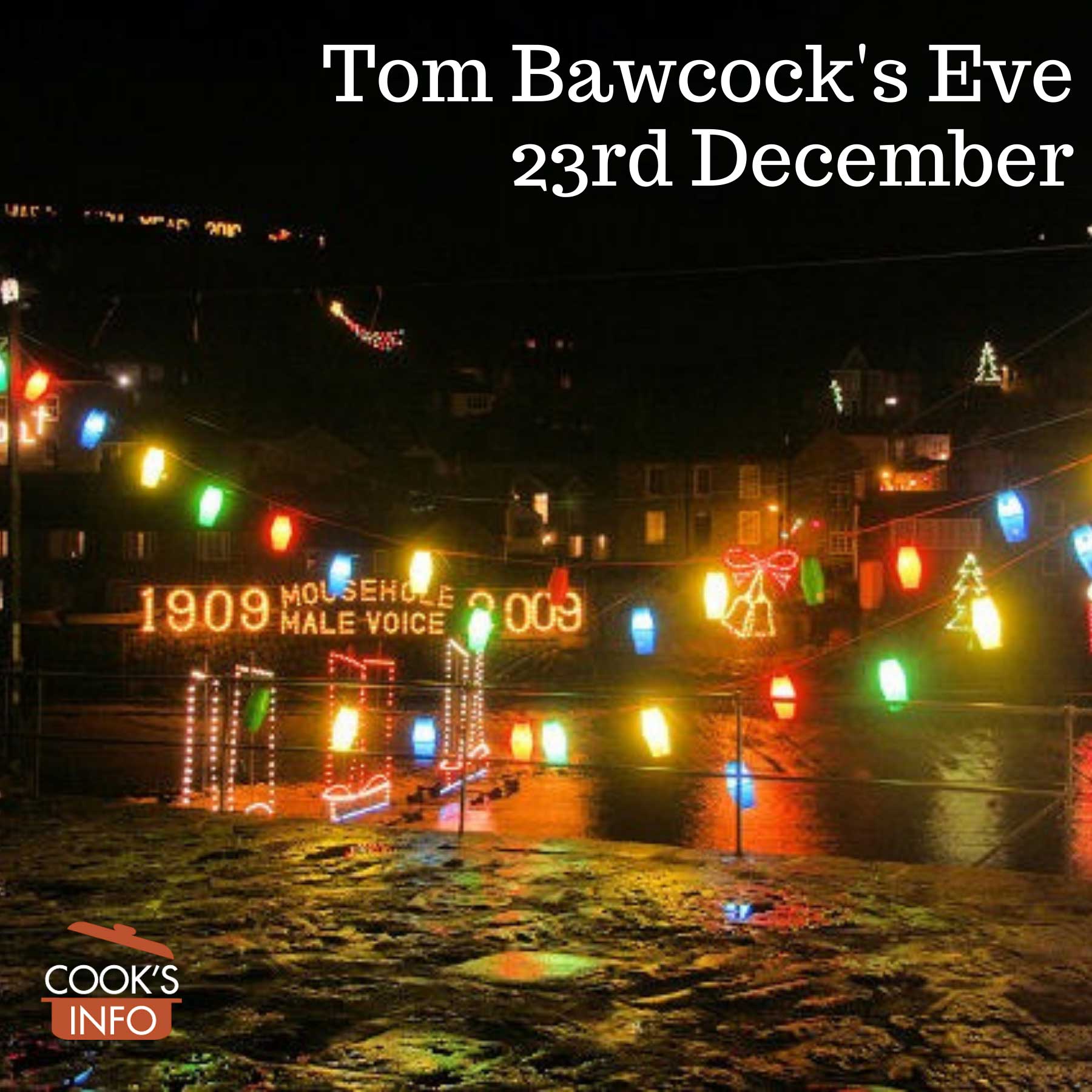 Tom Bawcock’s Eve is celebrated in the village of Mousehole (pronounced “Mowzel”) in Cornwall, near Penzance, England.

A fishing village of winding, narrow streets, Mousehole is the place most closely associated with Stargazy Pie on account of the “Mousehole Cat” story.

The village was near starvation one winter on the 23rd of December, as continued storms had stopped anyone from going out fishing (the year is never specified.) There are several versions of what then happened. One has a fishermen, Tom Bawcock (a widower) brave a storm at sea to go out fishing and bring back enough fish for everyone, either the same day or the next day, the 24th. He talked his crew into going out with him, and took his cat as well and the cat “calmed the sea” (sic.) The cat’s name was “Mowzer.” Other versions say that Tom and his crew acted upon a lull in the weather.

Reputedly, Tom caught seven different kinds of fish (not just pilchards, as are used in the famous pie.) The landlady of the Ship Inn pub, right on the harbour, made a stargazy pie from some of the fish.

Stargazy pie is still served on the night before Christmas Eve at the Ship Inn pub in Mousehole as a tradition based on the story, or as a tradition that the story sprang up around. The night is called Tom Bawcock’s Eve. A book called “The Mousehole Cat ” (authored by Antonia Barber; illustrated by Nicola Bayley) is based on the legend. 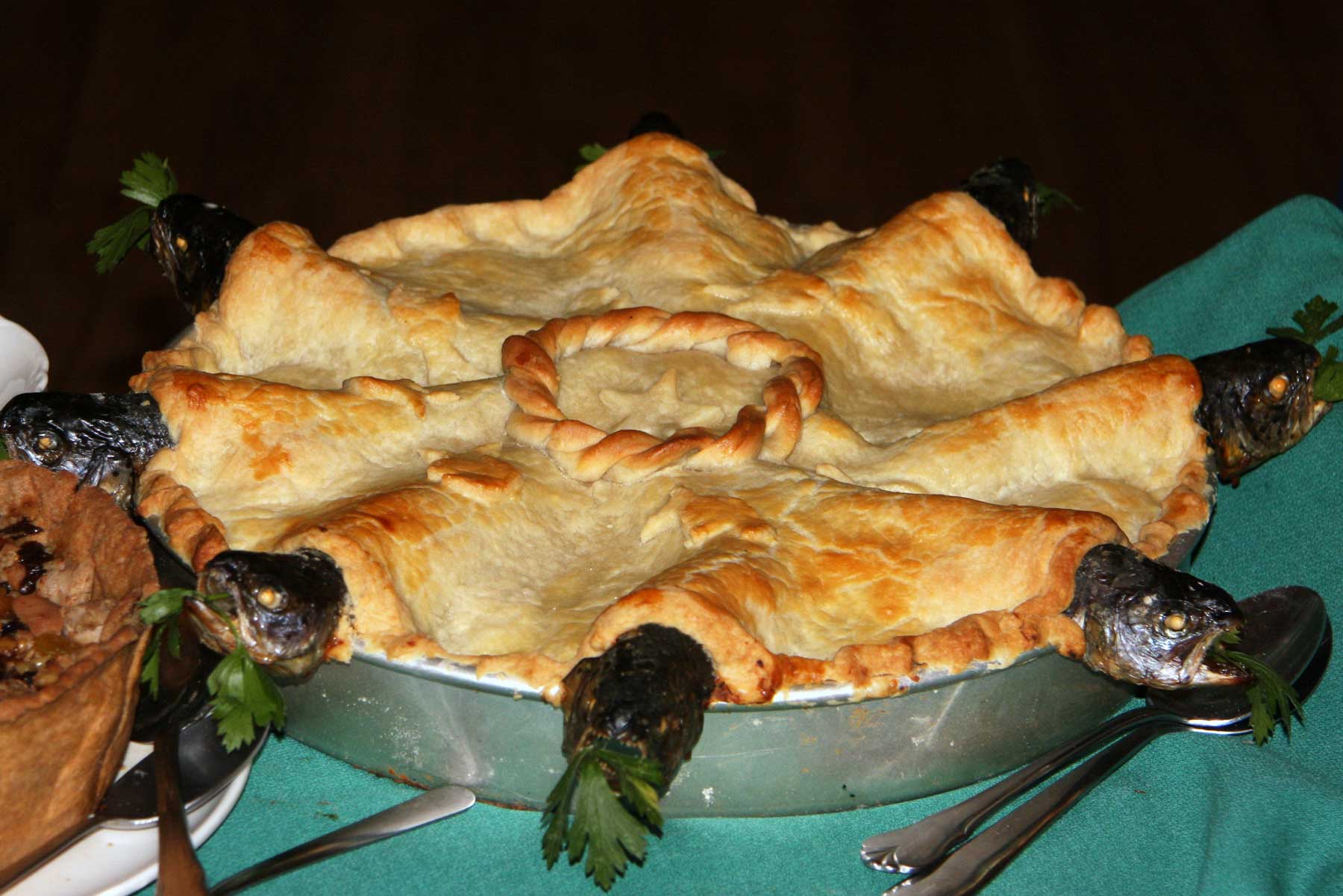 At the start of the night, the staff at the Ship Inn announce when the pie is ready. For a while, it is served right from the bar, then it is sent into the attached restaurant.

The pub also serves a huge amount of Guinness on that day.

The local people used to sing in the pub in the afternoon on Bawcock’s Eve. Not many locals go to the pub any more on the night, though, because it is so crowded with tourists, and the tourists don’t know the songs. Now, just a few people might strike up a song later in the evening, just to keep up the spirit of the day. Also in the evening, there is a procession of children, musicians and dancers carrying lanterns through the village.

Tourists also come to Mousehole to see the Christmas lights; there are even displays out in the harbour, and usually one as well in the village in the form of a stargazy pie. The lights start going up in late November; houses are decorated with lights, as well as the boats in the harbour. Every year, a new lighting attraction is added to keep up interest. 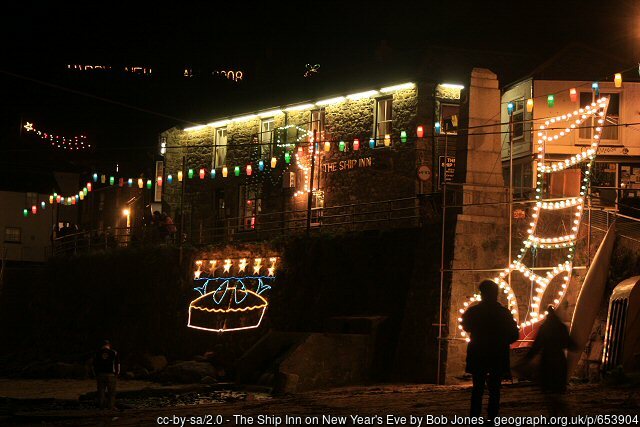 A market has been run in Mousehole since 1266.

200 Spaniards landed here in 1595 and burned most of the village to the ground. The fire marks are still evident on some of the older stone buildings. 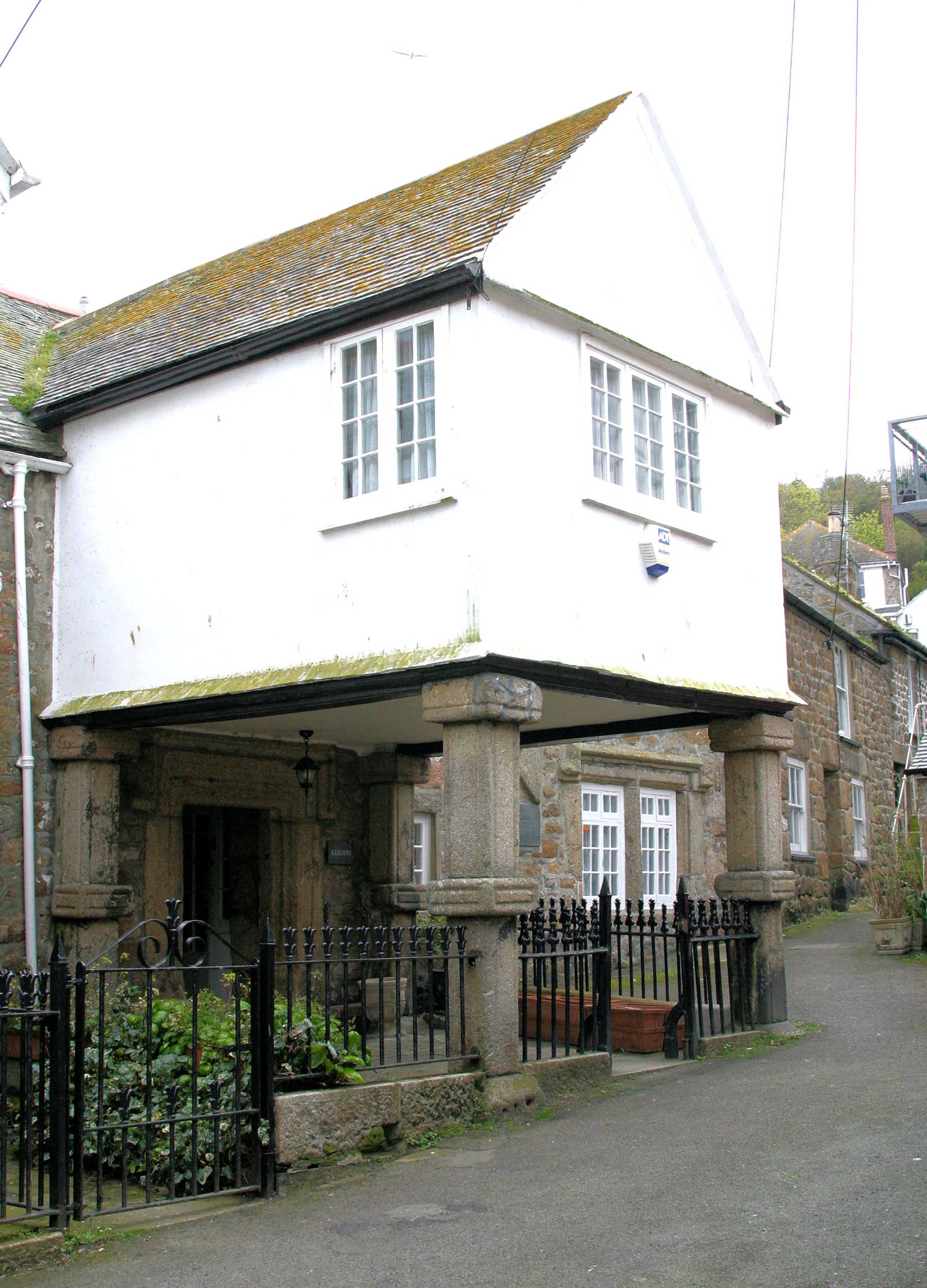 This song was written around 1930 by Robert Morton Nance (1873-1959). He based the tune on an old Cornish dance tune called the ‘Wedding March’.

Wen morgee brath ad cleard tha path
Comed lances for a fry,
An then us had a bet o scad
an starry gazee py.

A merry place, you may believe,
Was Mousehole ‘pon Tom Bowcock’s Eve;
To be there then who wouldn’t wish
To sup of seven sorts of fish,

Next comed fair maids, bra’ thrusty jades
As made our oozles dry
And ling and hake, enough to make
A running shark to sigh

As each we’d clunk as health were drunk
In bumpers brimming high
And when up came Tom Bawcock’s name
We praised him to the sky.”

Given that 23 December is also a time for the pagan midwinter solstice celebrations, some wags have suggested that “Bawcock” might have originally been “Beau Cock.”

“History records that [the Spanish] ransacked Mousehole, but not whether they learned the correct pronunciation of the hapless village: ‘Mouzul.'” [1]Wade, Alex. The Walk File: Mousehole, Cornwall. London: Financial Times. 10 Sept 2010.

This web site generates income from affiliated links and ads at no cost to you to fund continued research · Information on this site is Copyright © 2022· Feel free to cite correctly, but copying whole pages for your website is content theft and will be DCMA'd.
Tagged With: Cornish Food