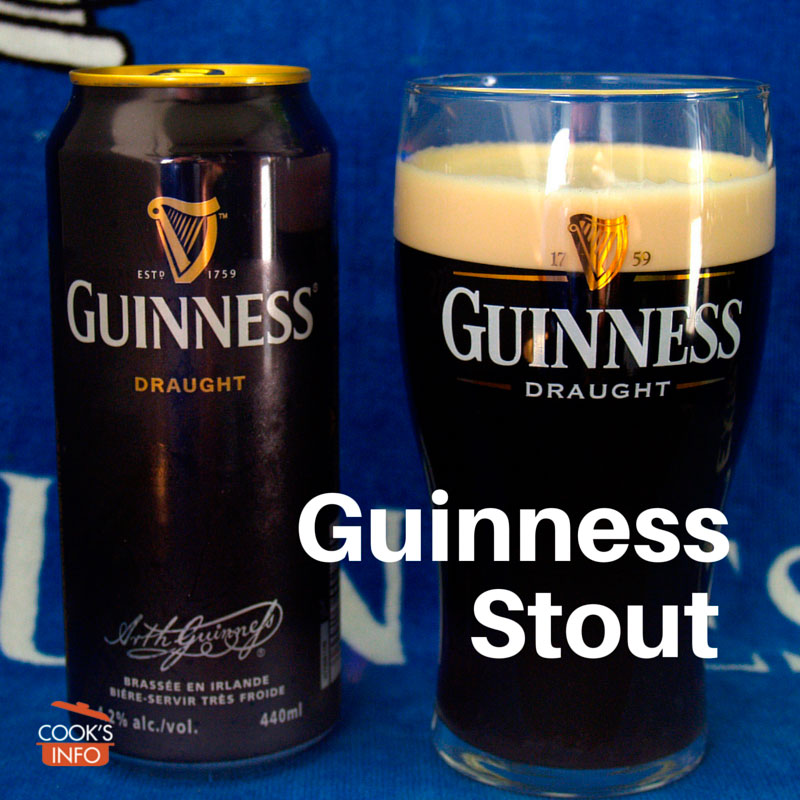 Guinness is a Stout. In your glass it will appear black, with a thick, creamy, foamy head on top. The two layers (the dark beer and the foamy head on top) are sometimes said to be “as dark as Cromwell’s heart and as white as snow.” Guinness, however, says that their beer is not actually black, but rather a dark ruby red.

Guinness is brewed the same way in many different parts of the world. Though some people think it tastes different in different places, if there is any difference, it would be owing to the local water used, as that is the only variable in the brewing. Blind taste testers have been unable to reliably distinguish one Guinness from another. In 2011, testers from the Institute of Food Technologists tasted Guinness in 33 cities in 14 countries, and pronounced the Guinness served in Ireland to be the best tasting. They also factored into the score, though, elements such as pub appearance. [1]

The creamy head on top is caused by nitrogenation when it is poured, either through a special tap, or from a can with a widget. There is a version of Guinness, “extra stout”, which is not hydrogenated and does not have the creamy head.

The ingredients are: roasted malted barley, hops, yeast, and water.

Guinness is currently (2016) owned by the British conglomerate, Diageo, formed in 1997 from the merger of Guinness and Grand Metropolitan.

As of 2014, the largest market in the world for Guinness is Britain. Nigeria is second, and Ireland is third. 40 percent of all Guinness (as of 2011) is actually sold in Africa.

Guinness Stout sold in Canada is actually brewed in Ireland, as per the side of the tin shown immediately below. 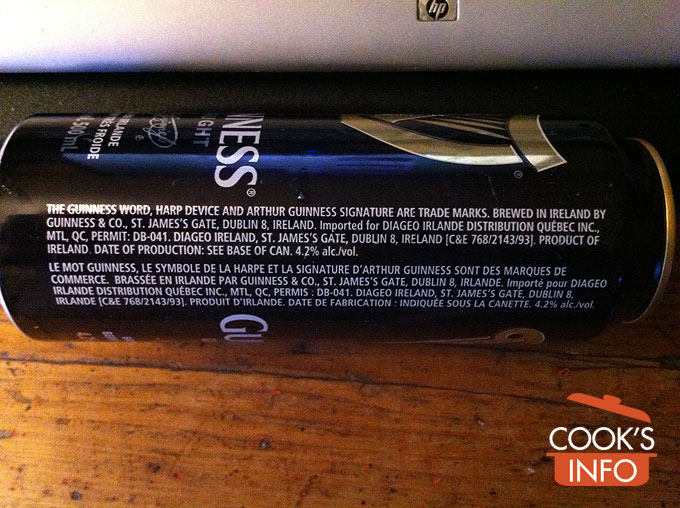 Guinness sold in Canada is brewed in Ireland

Guinness Extra Stout is brewed in Canada by Labatt under license from Arthur Guinness Son & Company. [2]

To pour a glass of Guinness, hold the glass at a 45 degree angle, and pour about half the stout in very slowly. Stop, and stand the glass up and let it rest. When the stout in the glass has separated so that there is a clear black layer, then finish the pour at the same angle and same speed. A perfect pour should take about 200 seconds in total including the rest, and result in a bottom layer that is perfectly black, with a creamy tan head.

Another brand of Stout (though chances are if your supplier sells Stout, it’s going to be Guinness); or a Porter.

For decades, Guinness promoted itself as “Good for you”, and would provide a bottle of free Guinness to blood donors. The slogan and the promotion were discontinued in March 2010.

It’s a popular misconception that the waters used for Guinness Beer came from the Liffey River in Dublin. Many residents of Dublin even believe it.

Eric Newby, the English travel writer, visited Guinness’s water filter beds in the mid-1980s when he was in Dublin. The filter beds are to the west of Dublin, near Lock 8 between Ballyfermot and Clondalkin on the Grand Canal (that flows out of Dublin and joins with the Shannon River to the West and the Barrow River to the south). There he found that the filter beds were brick-lined ponds. Some were open to the air, others were not only roofed over, but had grass growing over the roofs. Here in these ponds the water used to make Guinness beer was allowed to rest, so that sediment could sink to the bottom, before being piped to the Guinness plant 4 1/2 miles away for further purification and ultimate use.

The water in those filter beds, still there today, does not come from the River Liffey, but rather from the Grand Canal that the beds are near. And the water in the Grand Canal — at that point near Lock 8, at least — does not come from the Liffey, but rather from Seven Springs, St James’s Well, in Pollardsdown Fen near Kildare. That water is soft and alkaline, with lots of lime, and that, Newby was told, was the water that was used for making Guinness.

By 1995, though, the water Guinness used had changed. “Above 8th lock are the filter beds from which Messrs Guinness used to draw the soft water that was so suitable for brewing. The filter beds are still in use today, but the water is used for washing purposes only.” (“Guide to the Grand Canal of Ireland”, The Waterways Service with the co-operation of the Inland Waterways Association of Ireland, 5th Edition, 1995.) The water now (as of 2004) comes from the Wicklow mountains, in County Wicklow.

If you have seen up close the Grand Canal near Dublin, it’s no wonder Guinness changed the source of their water, no matter how scenic the “Fen” it had started from. We remember half-submerged rusting grocery trolleys in a very rough area, but we’ll leave it to the “Guide to the Grand Canal of Ireland” to sum that stretch up best:

“The canal rises steeply out of the city, but this is an unattractive area and it is the stretch of canal most subject to vandalism. It is wise to make a point of taking locks 1 to 9 early in the morning, or during school hours, to avoid the sometimes boisterous attentions of children. Despite much time-consuming work by the Waterways service removing debris from the canal, some rubbish may be picked up by propellers, especially on deep-draught vessels.”

The Guinness breweries in Counties Louth and Kilkenny were shutdown in 2013. The St. James’ Gate Brewery in Dublin was slated to be shut down as well in 2013, and have its production moved to Kildare, but after an outcry Guinness decided to renovate the Dublin plant instead. Guinness has a 9,000 year lease on the Dublin site for $65 a year; the lease started in 1759.

There’s a saying in Ireland, referring to the two different colours in a glass of Guinness, that Guinness is “as white as the driven snow, and as black as Cromwell’s heart.”

[1] Daily Mail. Stout of Ireland: Why Guinness tastes better on the Emerald Isle than anywhere else in the world. 7 March 2011.

[5] “Luckily for us, Guinness is one of the most low-cal beers around. Only 170 calories, while most other beers contain close to 200, Guinness costs us a PointsPlus value of 5 per pint.” — Gerardi, Jamie. Plan-Ahead St. Patrick’s Day Pub Crawl. Retrieved February 2013 from www.weightwatchers.com/util/art/index_art.aspx?tabnum=1&art_id=106271

This web site generates income from affiliated links and ads at no cost to you to fund continued research · Information on this site is Copyright © 2021· Feel free to cite correctly, but copying whole pages for your website is content theft and will be DCMA'd.
Tagged With: Irish Food