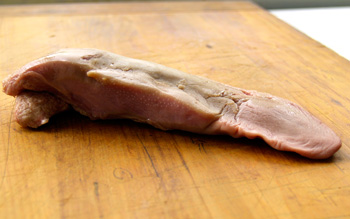 Tongue is a lean meat usually from veal, beef, sheep or pig. Many people don’t look the look of it, or the texture, saying it is too chewy, but if it’s cooked properly, it shouldn’t be chewy.

Beef Tongue is item number 716 in the North American meat cut guide [1]. The guide calls for the tongue root to be trimmed off at the back of it, all trace of windpipe to be removed, and any blood vessels trimmed even with the surface. Swiss cut beef Tongue (item 717) has all glands, small base bones at the bottom and base muscles removed, and it should be free of exterior fat.

Pork tongue has a blander taste than beef; lamb’s tongue is tougher.

American cookbooks up until the 1950s listed tongue recipes.

Tongue is usually peeled after cooking, then sliced thinly and served cold in sandwiches. In Mexico, tongue meat is used in “tacos de lengua.”

In the UK, Tongue was sold in glass jars, packed with jelly. It was considered a luxury item, and was one of the most expensive items in the meat section. Sainsbury’s grocery stores made their own. In the 1930s, they made them in their kitchens in Blackfriars, London.

CALVES’ TONGUES — Wash and put into a saucepan with half a dozen slices of carrot and onion sliced, five cloves, a teaspoon of whole peppercorns, and half a level tablespoon of salt. Cover with boiling water and simmer until tender. Drain and cool a little, then take off the skin. Drop back into the hot liquid to reheat. Serve with a sauce. Melt one-quarter cup of butter, add three slightly rounding tablespoons of flour, stir and cook until browned, add two cups of broth, brown stock of rich gravy melted in hot water, one-half level teaspoon of salt, the same of paprika, a saltspoon of allspice, one tablespoon of vinegar, a few grains of cayenne, and half a tablespoon of capers. Pour over the tongues and serve. — from Rufus Estes. Good Things To Eat, As Suggested By Rufus. Chicago: The Author. 1911. Page 23.

BAKED BEEF TONGUE : “Buy fresh tongue and carefully wash it in cold water. Place in a large stewing kettle. Add hot water to cover. Add 1 tablespoon salt and a bay leaf. Bring to brisk boil and reduce heat to simmer and continue cooking until tongue is tender, about 2 hours. Remove from liquid and remove skin from tongue while hot. Place tongue in shallow roasting pan, rub with bacon drippings or other shortening, and bake 1 hour at 350 degrees.” — From The Meal Planning Guide, Health-for-Victory Movement, Mansfield, Ohio, 1944.

Cold Tongue : “Soak tongue in water, approx 1 hour. Drain and cook in water for 2 – 3 hours. To this water add 3 – 4 peppercorns, 2 – 3 cloves, 2 teaspoons sugar and 1 tablespoon vinegar. It can be cooked with other salted meats, e.g. corned beef. After cooking put in bowl of cold water, then peel. Place meat in small tongue press or mould, put saucer on top and press down hard with brick or something heavy. When set put in refrigerator.” — Australian Agricultural Company. The Brief on Beef. Milton, Queensland, Australia. 1999. Page 90. Recipe 1505.

Woman in a restaurant to a waiter:
Woman: “What do you recommend?”
Waiter: “Well the tongue is very good today…”
Woman: “Oh! I could never eat anything that was in an animal’s mouth. I think I’ll just have a couple of eggs.”