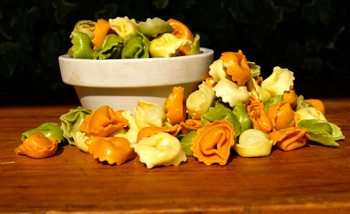 Tortellini are two small circles of pasta with a small bit of filling in the middle, which are then folded and pinched in on themselves so that they form little “hats.” Though mind you, after a certain point, it seems everyone describes all small, stuffed pasta as “hats” – Agnolotti, Cappelletti, Cappellacci, Olandesine, etc. Refreshingly, the person actually credited with inventing Tortellini, a man named Giuseppe Cerri, said he modelled the pasta after a woman’s navel.

Tortellini are a traditional pasta in the Bologna region of Italy. They are often served in broth, rather like little dumplings. It is traditional to serve them this way on Christmas Eve. But they are also good with cream and butter, or in a tomato cream sauce.

Tortelloni is a larger version of Tortellini, as are Tortelli.

Stuffed pasta shapes were often a way to use up leftover meats.

The word has no association with the English word “tortoise”; in Italian, a tortoise is a “tartaruga.”