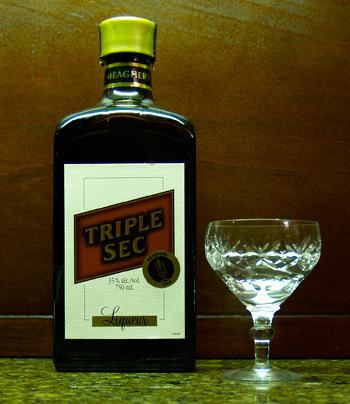 Triple Sec is a clear, semi-sweet orange flavoured liqueur that is made from the peel of oranges grown on the Caribbean island of Curaçao.

The ingredients include Curaçao Orange Peel, lemons, sugar and other fruit. The peel, along with the leaves and blossoms, is soaked in alcohol so that the alcohol absorbs the flavour. The alcohol is then distilled three times to concentrate the taste.

Curaçao was originally called “Curaçao Triple Sec”, because it is Curaçao, but Curaçao that is distilled in 3 (thus the “triple”) separate steps instead of just one, as for regular Curaçao.

There are several different brands of Triple Sec, made by companies such as Bols, Combier, McGuinness, Meagher, etc. It is not a protected product name. Each will vary in sweetness, oranginess, price, etc.

Triple Sec is popular for use in making cocktails such as cosmopolitan, margarita and white lady.

The Combier company states that in 1834, Jean-Baptiste Combier and his wife made the first Triple Sec. “After years of preparation, practice, failure and discovery, time during which patience became the most tested skill of all, Jean-Baptiste’s quest ended with the perfect concoction in 1834: sweet and bitter orange peels from the West Indies, local spices from the South, alcohol from the North, and family-secret ingredients from the Loire Valley – a formula that became the world’s first triple sec: Combier Liqueur d’Orange.” [1]

Messrs. E. Cusenier et Cie., Orleans, exhibit a considerable variety of liqueurs, some of much interest, and many of which, through their kindness, we have had the opportunity of examining. The principal are the following: “Curaco [Ed: sic] triple sec,” “Curaco sec, Dubborange, Amsterdam,” “Curaco doux,” “Creme de Menthe glaciale,” “Creme de Cacao Chuova a la Vanille,” “La Prunelle,” “Liqueur Cusenier,” “Soda Cusenier,” “Kava de Vichy,” and “Kummel.”… The liqueurs next in order to be noticed are those of Mons. Desire Taillandier, of Tours. This maker exhibits “Curaco Triple Sec,” a liqueur called “La Tourangelle,” and “Creme de Cacao.” Each of these deserves a short special notice. The Curaco is a combination of alcohol with the bitter principle and volatile oil of the Seville orange. It is therefore a very natural mixture, and one possessing agreeable and useful stomachic properties.” — The Lancet Analytical Commission, “Report on the Food Products exhibited in the French and English Departments of the Universal Exhibition of Paris”, The Lancet, September 21, 1878, p. 417.

This web site generates income from affiliated links and ads at no cost to you to fund continued research · Information on this site is Copyright © 2023· Feel free to cite correctly, but copying whole pages for your website is content theft and will be DCMA'd.
Tagged With: Orange Liqueurs