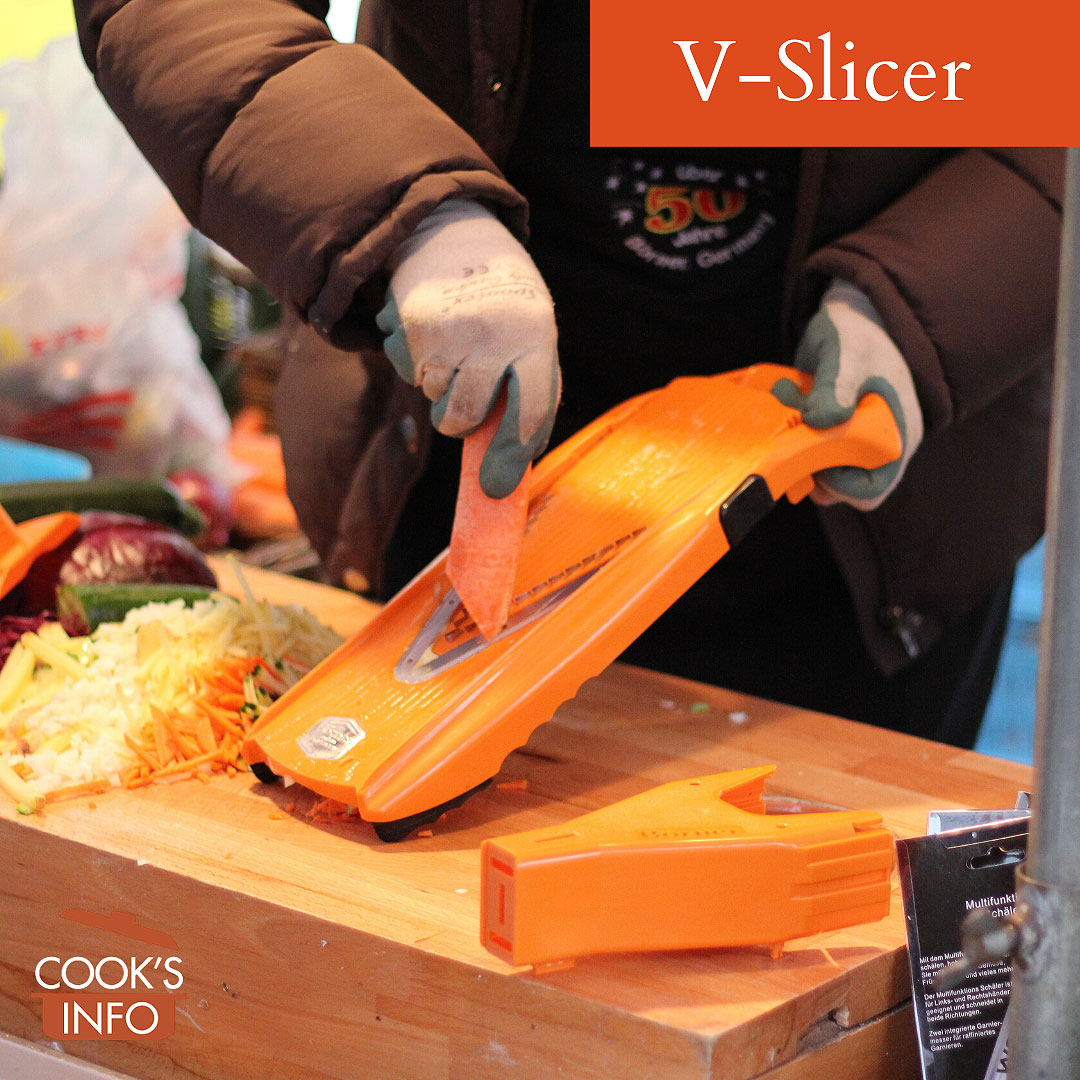 A V-slicer, like a mandoline, is a mounted slicing tool. But instead of its sharp metal blade being a straight, diagonal line, it is V-shaped.

There are different brands, but almost all come with plastic bodies, are less expensive than mandolines, and have interchangeable blades.

They come with different inserts for julienne slicing, thick slicking, and chopping and dicing. All the metal is on the blade, not on the inserts. The inserts act as rails, guiding the food underneath the blade to produce the kinds of cuts you want. You snap the insert into place. The food comes out underneath.

You can get a stand or a caddy (varies by brand) to go with it, in which to store the slicer and all the accoutrements with it.

You can use a V-slicer to:

You cannot make ridged French fries with a V-slicer.

To clean, just rinse with water, or use hot soapy water with a brush for messy jobs. Don’t soak the board with the blade in water. While washing it (or fishing for it in a sink of water), be very mindful that there’s a sharp blade attached to it.

Don’t put it in a dishwasher unless your model specifically says dishwasher-safe. Heating elements can melt it, and the metal might rust. Some inserts from some brands are marketed as dishwasher safe.

Some coloured vegetables such as sweet potatoes may stain the plastic.

You will need some practice to get up to speed.

Some V-slicers come with holders that you hold the food with while slicing it, to keep your hand away from the blade. Generally these are called “safety holders.” The blades are very sharp and when you’re not paying attention, it would be easily to slice your fingers or fingertips off.

Some people say they find it very hard to make long vegetable sticks using the safety holders, but the fact remains that while we know how to grow new vegetables, we have not yet figured out how to grow new fingers.

Our recommendation is to never use a V-slicer without a safety holder, and when buying a V-slicer, make sure one comes included. (Yes, we realize the photos show a V-slicer being operated with the safety holder sitting off to the side and not being used: we will replace these photos at some point in the future with ones showing recommended operation.)

If something gets stuck between the board and the blade, don’t ever try to push it out with one of your fingers. 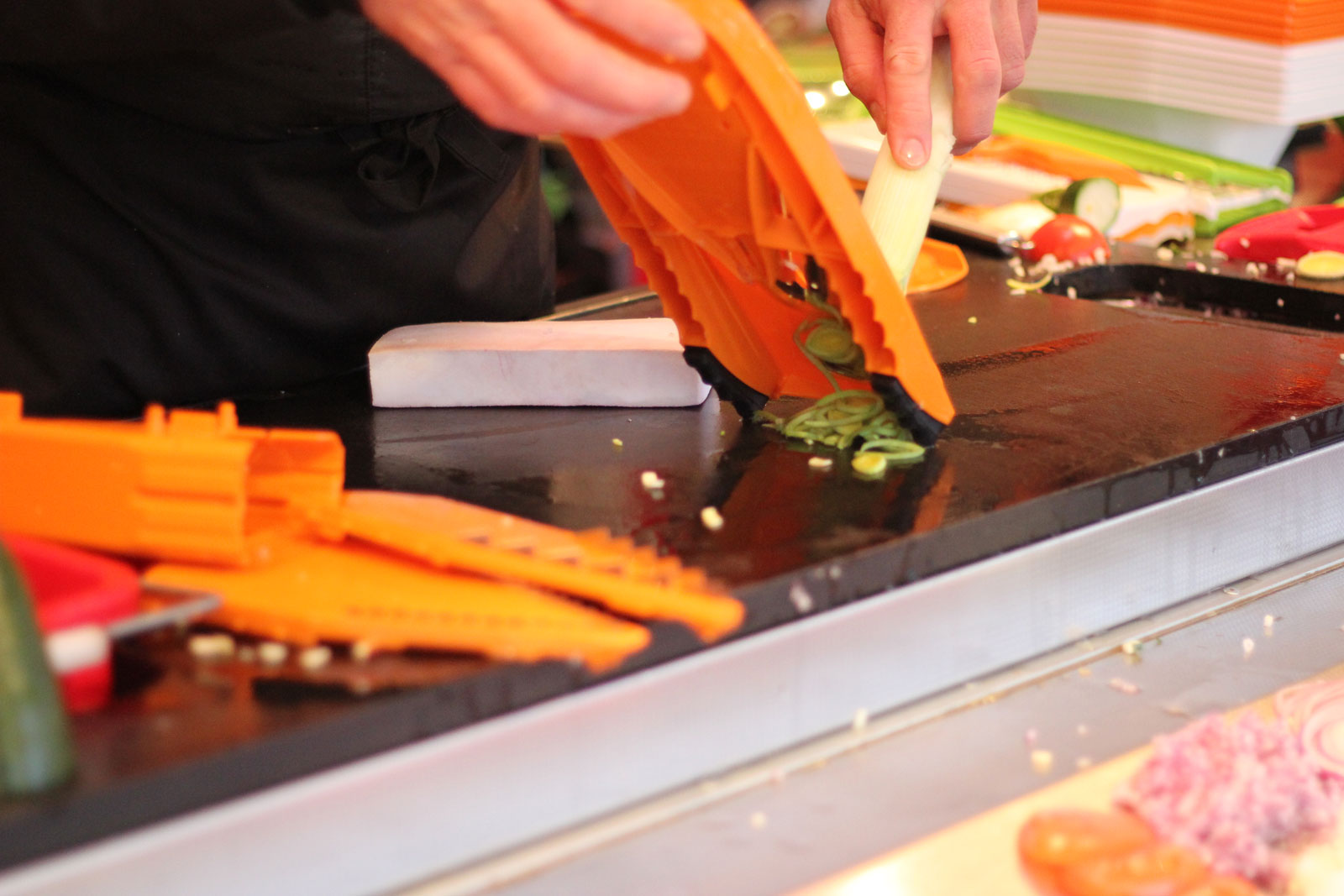 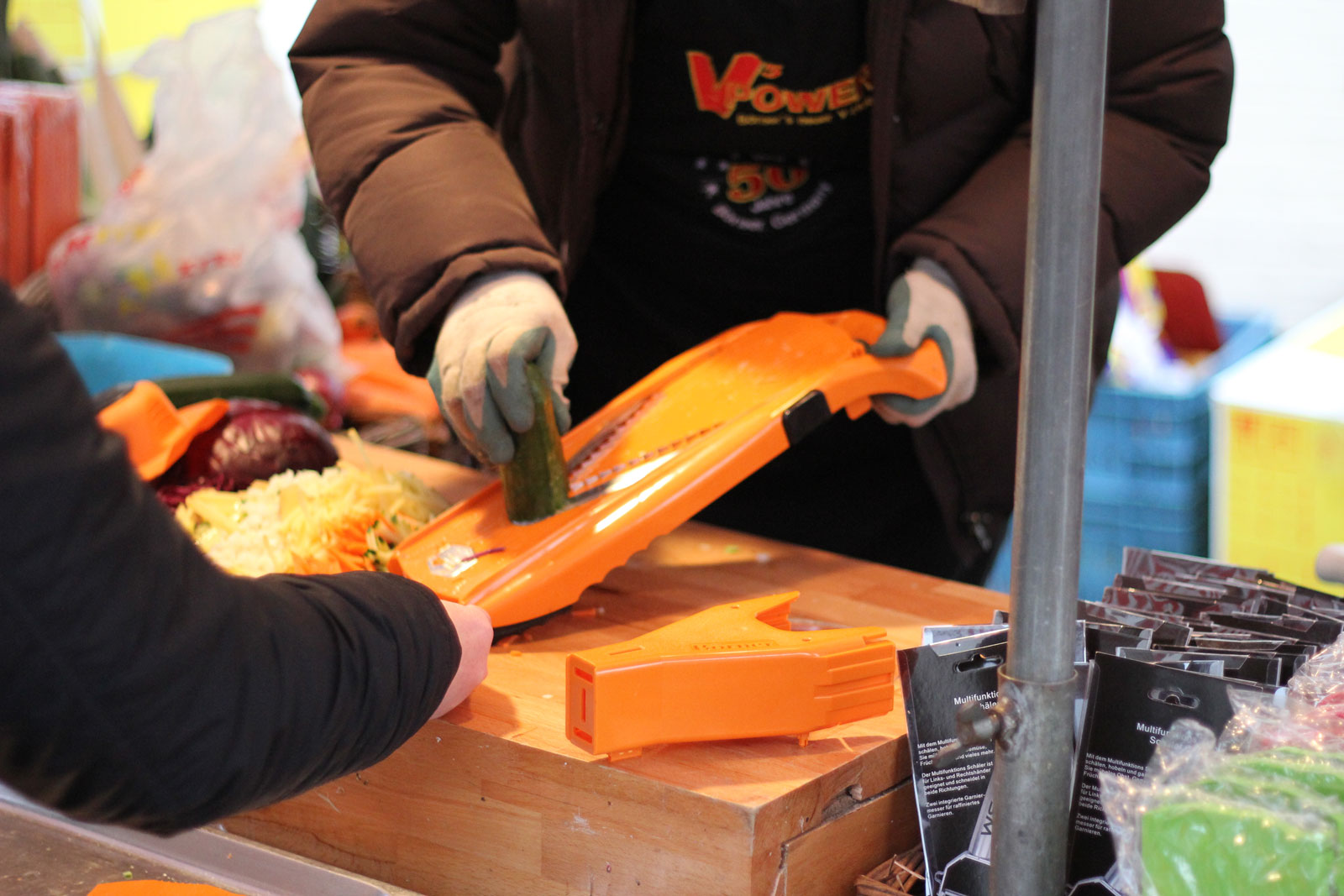 This web site generates income from affiliated links and ads at no cost to you to fund continued research · Information on this site is Copyright © 2022· Feel free to cite correctly, but copying whole pages for your website is content theft and will be DCMA'd.
Tagged With: Mandolines, Slicers