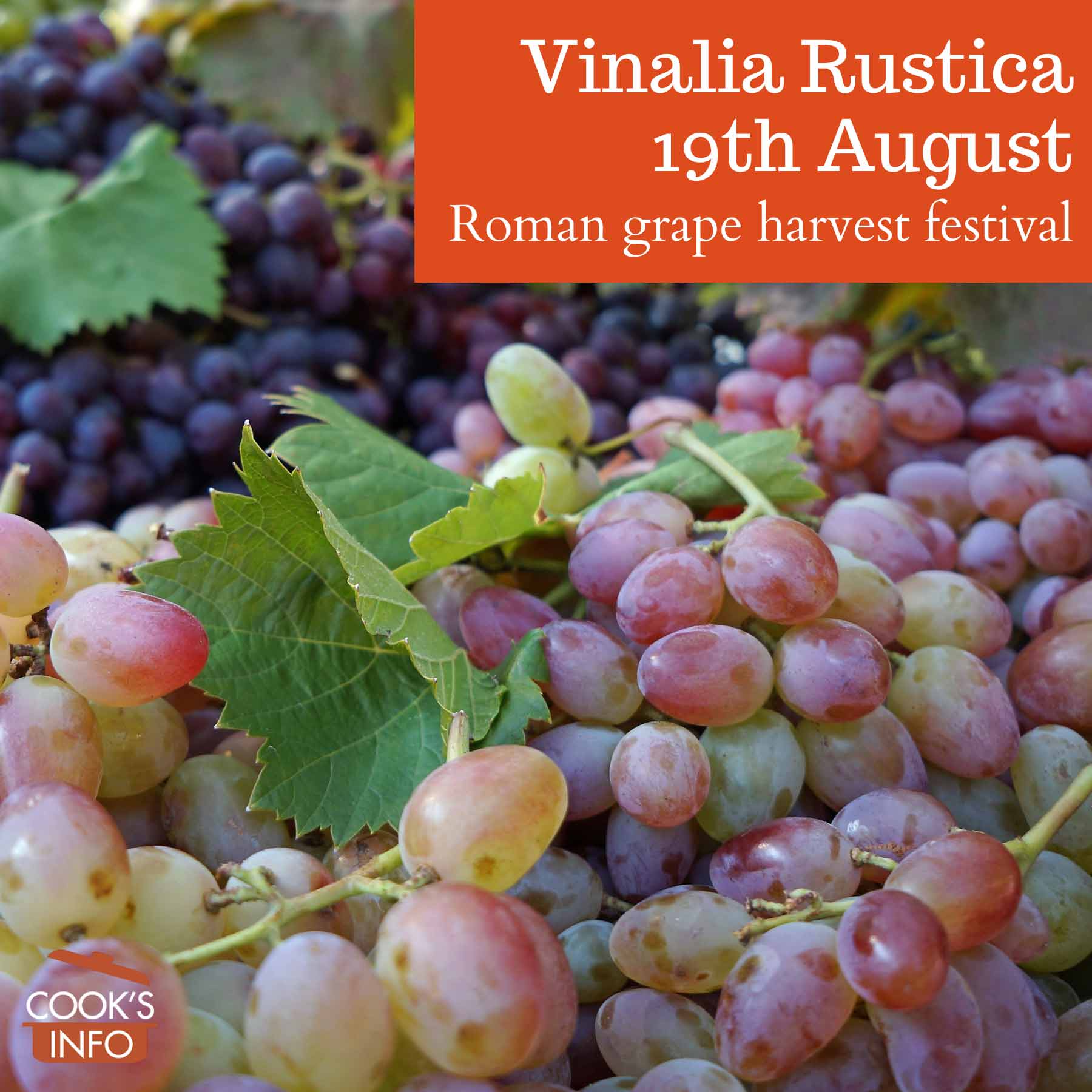 The Vinalia rustica was a Roman harvest festival held on the 19th of August to celebrate the beginning of the grape harvest for wine.

Unlike the new wine festival of “vinalia urbana” in April which was celebrated only in the city of Rome itself, this wine festival was celebrated throughout the region of Italy surrounding Rome called “Latium” [1]Schmitz, Leonard. Vinalia. In: Smith, William. A Dictionary of Greek and Roman Antiquities, John Murray, London, 1875. P. 1198. , now known as Lazio.

In Rome itself, Jupiter’s Chief Priest, the flamen dialis, symbolically picked a bunch of grapes, then sacrificed a lamb to the god Jupiter and crushed the grapes over its body. He then said a prayer asking Jupiter to hold off any severe fall storms long enough for the grape harvest to be safely brought in.

“The rustic vinalia, which fell on the 19th of August (XIV. Calend. Sept.) and was celebrated by the inhabitants of all Latium, was the day on which the vintage was opened [Ed: meaning grape harvesting for that year was begun]. On this occasion the flamen dialis offered lambs to Jupiter, and while the flesh of the victims lay on the altar, he broke with his own hands a bunch of grapes from a vine, and by this act he, as it were, opened the vintage [Ed: initiated the harvesting of grapes] (vindemiam auspicari; Varro, de Ling. Lat. VI.20), and no must [Ed: unpasteurized grape juice] was allowed to be conveyed into the city until this solemnity was performed (Plin. H. N. XVIII.69 §4). This day was sacred to Jupiter, and Venus too appears to have had a share in it (Varro, l.c.; de Re Rust. I.1; Macrob. Sat. I.4; Ovid, Fast. IV.897, &c.). An account of the story which was believed to have given rise to the celebration of this festival is given by Festus, (s.v. Rustica vinalia) and Ovid (Fast. IV.863, &c.; compare Aurel. Vict. de Orig. Gent. Rom. 15).” [2]Schmitz, Leonard. Vinalia. In: Smith, William. A Dictionary of Greek and Roman Antiquities, John Murray, London, 1875. P. 1198.

One Roman writer, Verrius Flaccus, says at this point the new wine could be brought into Rome, but most historians feel that he was actually referring to the vinalia urbana in April, because at this point there was no wine, just grape juice starting to ferment.

Eventually the festival also became associated with Venus, if not even more so than Jupiter:

The festival was also called “vinalia altera“, meaning the “other vinalia”, in reference to the first one held in spring. [4]Schmitz, Leonard. Vinalia. In: Smith, William. A Dictionary of Greek and Roman Antiquities, John Murray, London, 1875. P. 1198.

The date on the Roman calendar was marked as “XIV Kalends September”, which translates to August 19th in the way we track it now.

This web site generates income from affiliated links and ads at no cost to you to fund continued research · Information on this site is Copyright © 2022· Feel free to cite correctly, but copying whole pages for your website is content theft and will be DCMA'd.
Tagged With: Roman Holidays, Roman Wines