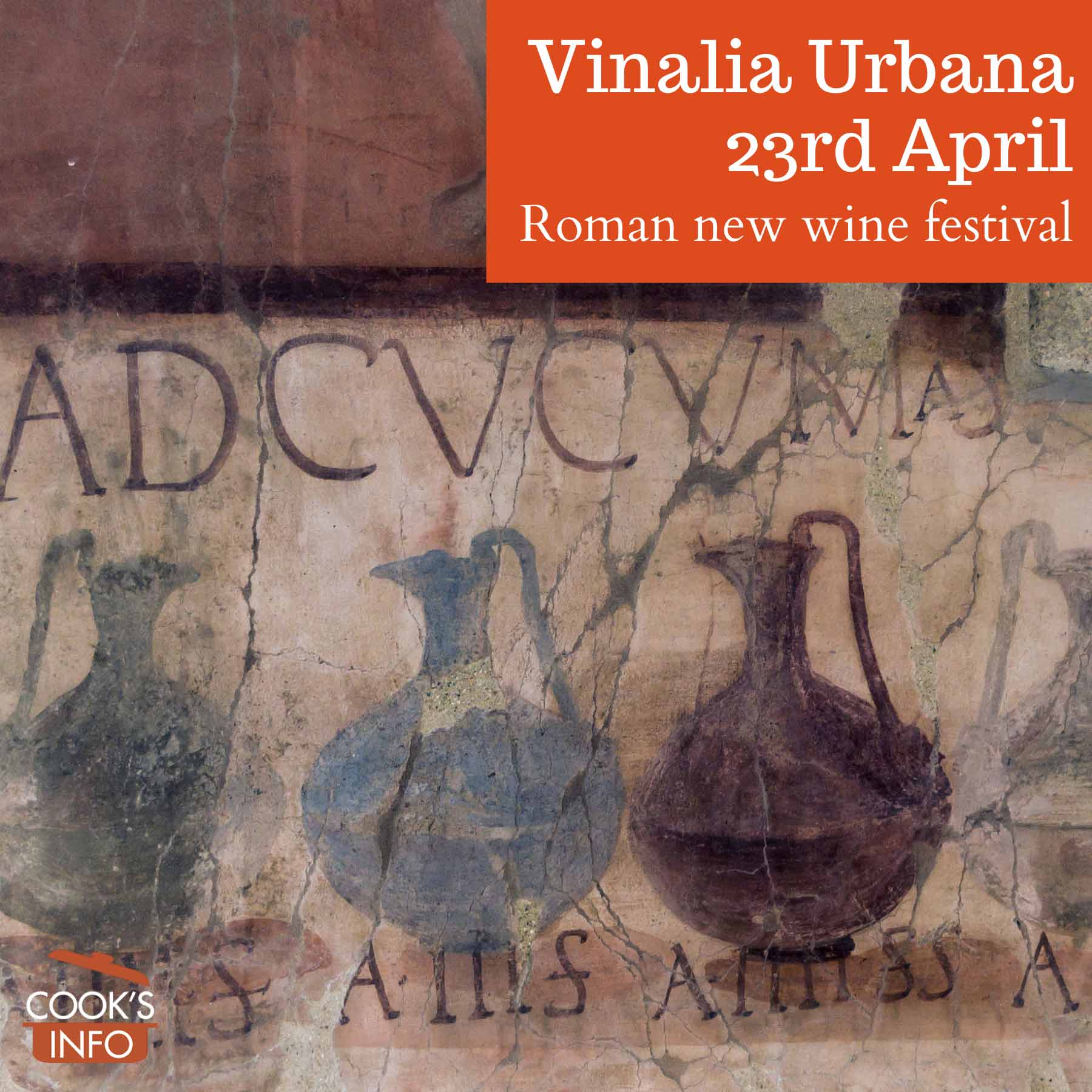 The Vinalia urbana (urban wine festival) was a Roman wine festival held on the 23rd of April to officially crack open the first of last year’s wine production.

“The vinalia urbana were celebrated on the 23rd of April when the wine casks which had been filled the preceding autumn were opened for the first time and the wine tasted.” [1]Smith, William. A Smaller Dictionary of Greek and Roman Antiquities. London: John Murray. 1874. Page 415.

The day celebrated the first availability of the new supply for wine from last fall, making it the Beaujolais Nouveau festival of its era.

The festival was celebrated only within the city of Rome, hence the name “urbana” (from “urbs”, meaning “city”).

New wine from last season’s production in the countryside around Rome couldn’t be brought into the city of Rome to be sold before this date. [2]Fowler, William Warde. The Roman Festivals of the Period of the Republic: An Introduction to the Study of the Religion of the Romans. New York: Macmillan. 1899. Page 87. It’s not clear whether this applied to wine imported from elsewhere, such as Egypt or Spain.

The high priest of Jupiter, the flamens dialis, would offer the first samples of the new wine to Jupiter. Libations to him were poured using pure, unmixed wine — temetum. This wine offering was called a “calpar“. [3]Schmitz, Leonard. Vinalia. In: Smith, William. A Dictionary of Greek and Roman Antiquities, John Murray, London, 1875. P. 1198. Sex workers would also gather at one of the temples of Venus, offering wine, herbs and roses.

The festival was also called the “Vinalia prima” and “Vinalia priora“. In the Roman calendar, the date was the IX Kalends Mai. [4]Schmitz, Leonard. Vinalia. In: Smith, William. A Dictionary of Greek and Roman Antiquities, John Murray, London, 1875. P. 1198.

The vinalia urbana festival was originally associated with Jupiter. It’s speculated that part of the reason Jupiter was associated with the festival is that he would have been the one who gave the good weather that made the grapes, and thus the wine, possible in the first place.

Virgil (70 – 19 BC) retroactively ascribed the festival’s origin to a Roman legend about Aeneas’ fight with an Etruscan leader named Mezentius. Mezentius said the first fruits of the wine harvest belonged to him; Aeneas said, Jupiter, if you let me defeat him, I will ensure that the first of the new wine harvest is dedicated to you.

Some of the information we have on the festival comes from Ovid:

“On the Vinalia priora (April 23), we find some details in a passage from Ovid.

After having fermented and developed all winter, the wine was fit for consumption; then the winegrower solemnly opened the dolia and made a libation to Jupiter. Jouis ista dies (Enjoy this day), affirms Ovid, who explains why this day belongs to Jupiter and how the wines are then offered to him:

Dicta dies hinc Vinalia: Iuppiter Ulam uindicat, et festis gaudet inesse suis (“Hence the day is called the Vinalia: Jupiter claims it for his own, and loves to be present at his own feast. ” Fasti, IV, 899-900).

Other writers say that on this day, prostitutes would gather at the temple of Venus Erucina, outside the city walls at the Colline gate, and pour her wine offerings as well. (Ovid, Fasti, IX. KAL. 23rd; Plutarch, Roman Questions, #45). [6]”A temple was dedicated to Venus Erycina on the Capitol in 215 BCE and a second outside the Colline gate in 181 BCE. The latter developed in a way reminiscent of the temple at Eryx with its harlots, becoming the place of worship of Roman courtesans, hence the title of dies meretricum (“prostitutes’ day”) attached to April 23, the day of its foundation.” — Venus. Encylcopaedia Britannica. Accessed August 2021 at https://www.britannica.com/topic/Venus-goddess

“I will now tell of the festival of the Vinalia… Ye common wenches, celebrate the divinity of Venus: Venus favours the earnings of ladies of a liberal profession. Offer incense and pray for beauty and popular favour; pray to be charming and witty; give to the Queen her own myrtle and the mint she loves, and bands or rushes hid in clustered roses. Now is the time to throng her temple next the Colline gate…” [7]Ovid, Fasti, IX. KAL. 23rd

It’s also possible that an association with Venus came about because two major temples to her in Rome had possibly been dedicated to her on April 23rd.

Regardless, over time, the wine offering to Jupiter came to be made at the Temple of Venus on the Capitoline Hill [10] Clere, Brittney. Festivals of Venus: Vinalia Urbana, Vinalia Rustica & Venus Genetrix. Accessed August 2021 at https://study.com/academy/lesson/festivals-of-venus-vinalia-urbana-vinalia-rustica-venus-genetrix.html — which is to say, not the particular temple of Venus favoured by the sex workers.

William Warde Fowler, in his “Roman Festivals of the Period of the Republic” describes the festival, and contrasts it with the fall wine harvest festival (known as vinalia rustica:

“This day was generally known as Vinalia Priora as distinguished from the Vinalia Rustica of August 19. Both days were believed to be sacred to Venus; the earlier one, according to Ovid, was the foundation day of the temple of Venus Erycina with which he connected the legend of Aeneas and Mezentius. But as both Varro and Verrius are agreed  that the days were sacred not to Venus but to Jupiter, we may leave the legend alone and content ourselves with asking how Venus came into the connexion. The most probable supposition is that this day being as Ovid implies the dies natalis of one of the temples of Venus, the Vinalia also came to be considered as sacred to the goddess. The date of the foundation was 181 BC, exactly at a time when many new worships and especially Greek ones were being introduced into Rome. That of the Sicilian Aphrodite under the name of Venus seems to have become at once popular with its Graecus ritus and lascivia maior, and the older connexion of the festival with Jupiter tended henceforward to disappear. It must be noted, however, that the day of the Vinalia Rustica in August was also the dies natalis of one if not two other temples of Venus, and one of these was as old as the year BC 293. Thus we can hardly avoid the conclusion that there was even at an early date some connexion in the popular mind between the goddess and wine. The explanation is perhaps to be found in the fact that Venus was specially a deity of gardens and therefore no doubt of vineyards. An interesting inscription from Pompeii confirms this and attests the connexion of Venus with wine and gardens as it is written on a wine jar

The Vinalia then, both in April and August, was really and originally sacred to Jupiter. The legendary explanation is given by Ovid in 11. 877-900. Whatever the true explanation may have been, the fact can be illustrated from the ritual employed; for it was the Flamen Dialis [Ed: high priest of Jupiter] who ‘vindemiam auspicatus est’, i.e. after sacrificing, plucked the first grapes. Whether this auspicatio took place on either of the Vinalia has indeed been doubted, for even August 19 would hardly seem to suit the ceremony Varro describes; but the fact that it was performed by the priest of Jupiter is sufficient for our purpose.

Of this day April 23 we may guess that it was the one on which the wine skins were first opened and libations then made to Jupiter. These are probably the libations which Plutarch asks, ‘Why do they pour much wine from temple of Venus on the Veneralia (i.e. Vinalia)?’ [Ed: Plutarch has confused the Vinalia with the Veneralia, which was on the 1st of April]. The same libations are attested by Verrius: ‘Vinalia diem festum quo die vinum novum Iovi libabant.’After the libation, the wine was tasted, as we learn from Pliny, and it seems probable that it was brought from the country into Rome for this purpose only a few days before.

Varro has preserved an interesting notice which he saw posted in vineyards at Tusculum: ‘In Tusculanis hortis (MSS. sortis) est scriptum: ‘Vinum ne vehatur in urbem ante quam vinalia kalentur.” i.e. wine growers were warned that the new wine was not to brought into the city until the Vinalia had been proclaimed on the Nones. It must, however, be added that this notice may have had reference to the Vinalia in August; for Verrius, if he is rightly reported by Paulus, gives August 19 as the day on which the wine might be brought into Rome. Paulus may be wrong and have confused the two Vinalia, but in that case we remain in the dark as to what was done at the Vinalia Rustica, unless indeed we explain it as a rite intended to secure the vintage that was to follow against malignant influences. This would seem to be indicated by Pliny (H.N. 18. 284) where he classes this August festival with the Robigalia and Floralia, and further on quotes Varro to prove that its object was to appease the storms (i.e. to be expected in September). As regards the connexion of the vine culture with Jupiter, it should be observed that the god is not spoken of as Jupiter Liber, but simply Jupiter; and though the vine was certainly introduced into Italy from Greece, we need not assume that Dionysus coming with it was from the beginning attached to or identified with Jupiter. The gift of wine might naturally be attributed to the great god of the air, light, and heat; the Flamen Dialis who ‘vindemiam auspicatus est’ was not the priest of Jupiter Liber; nor does the aetiological legend, in which the Latins avoid the necessity of yielding their first fruits to the Etruscan tyrant Mezentius by dedicating them to Jupiter, point to any other than the protecting deity of Latium.” — Fowler, William Warde. The Roman Festivals of the Period of the Republic: An Introduction to the Study of the Religion of the Romans. New York: Macmillan. 1899. Pp. 85-87.

This web site generates income from affiliated links and ads at no cost to you to fund continued research · Information on this site is Copyright © 2022· Feel free to cite correctly, but copying whole pages for your website is content theft and will be DCMA'd.
Tagged With: Roman Holidays, Roman Wines