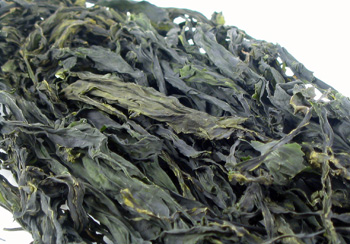 Wakame is a type of seaweed used in Japanese cooking.

It has a sweet taste and a chewy texture.

In Japan, where it is farmed, it is the second most used type of seaweed after nori.

Cultivation is encouraged by providing ropes for the seaweed spores to attach to for part of their initial life stages. It is later harvested by hooks from boats.

Tokushima, on the Naruto Strait, is a growing centre for it. The main harvest takes place in the spring (February to June.)

In Japan, it is available fresh or dried. To dry it, they first wash it in salt water, then lay it out in the sun to dry with charcoal sprinkled over it. The charcoal neutralizes an enzyme in the seaweed which would cause it to spoil otherwise. It often turns brownish when dried, but sometimes just has a dull green colour.

Wakame can be an invasive species where it is not controlled by harvesting.

It is not as popular in China as it is in Japan.

It can be toasted and sprinkled over dishes as a garnish, or added to soups, or stir-fried for use as a side vegetable.

Rehydrate the dried before use by rinsing under running water, then blanching in boiling water for 30 seconds, then plunging into ice water.

It turns green again when rehydrated, and expands about 4 times.

Then, spread out the leaves, and cut out and discard the hard midrib.

Wakame is native to the Japan Sea. It was introduced into the Mediterranean in 1971 and off the coast of Bretagne, France in 1983. Introduced into New Zealand and Australia in 1988.

When toasted, it is called “Yaki-wakame.”

This web site generates income from affiliated links and ads at no cost to you to fund continued research · Information on this site is Copyright © 2022· Feel free to cite correctly, but copying whole pages for your website is content theft and will be DCMA'd.
Tagged With: Japanese, Seaweed