Contents hide
A Walnut Whip is a candy.

It consists of a tall mound of vanilla-flavoured, soft fondant cream on top of a flat base of chocolate. This mound is then covered with glossy milk chocolate in a whirling pattern. Half a walnut is placed on top of the chocolate mound before the chocolate has dried.

The chocolate is somewhat thicker at the base.

They are now made by Nestlé Rowntree in Halifax, West Yorkshire, England.

They are currently sold (as of 2009) individually wrapped in blue foil.

Some people don’t actually eat the walnut, either discarding it outright, or giving it to a friend.

Knock-off ones are made by people such as Marks and Spencer. They do a pack of three, each a different flavour. As of 2009, the flavours are walnut, cappuccino and toffee pecan, for around £2.40 for the pack. They call theirs a “whip assortment.” 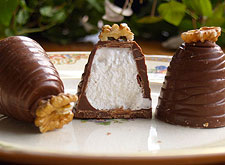 Walnut Whips were first made in 1910 by Duncan’s in Edinburgh, Scotland.

Over the years, coffee flavour and maple flavours were also offered (now retired.)

Originally, the walnut was placed inside the cone, on top. They, they added an extra walnut outside on top. Then, sometime in the early 1970s, they removed the walnut inside, leaving just the one outside.