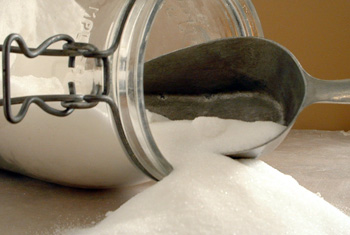 White Sugar is a dried, finely-ground crystal powder use as a sweetener. It can come from two different sources — sugar cane, or sugar beet.

Sugar cane is actually a grass that resembles bamboo. It grows up to 20 feet (6 metres) tall. It grows best in tropical areas (warm climates and lots of rainfall.)

To process cane into sugar, the cane are first shredded, then crushed to press the juice out of them. This first-stage sugar juice is a muddy brown. It has a combination of tastes: a harsh grassy taste, caramel, brown sugar, and molasses, all together. Lime (the mineral) is added to the juice, which is then heated. As it is heated, solid matters in the juice coagulate around the lime. The juice is then strained, and evaporated down by boiling until it is a mixture of syrup (molasses) and sugar crystals. This resultant mixture is called “massecuite.” The mixture is then put into centrifuges to drive off the molasses. (Before centrifuges, it was put in conical pots with a hole in the bottom that allowed the molasses to drain off, a process that took days or weeks. After it was drained, a yellowish large lump of sugar would be left behind.) Centrifuges get the sugar to 96% purity. The remaining 4% content is water, dirt, invert sugar. Further refining to give desired sugar crystal sizes results in 99.95% purity.

The sugar beet, also known as the white beet, has been specially bred for its sugar producing properties. It is grown in more northerly parts where sugar cane won’t grow. The beets are sliced up, then pressed for juice which is refined in the same way as sugar cane juice (though molasses from this sugar beet juice is not sold because there are issues with cleaning and straining it.) The UK derives a lot of its sugar from cane, though there are vast fields of sugar beets and processing plants in East Anglia.

If a recipe calls for sugar, without specifying what kind of sugar, then what is meant is the standard, granulated white sugar that everyone is familiar with.

Instead, for both, find a recipe that calls for less sugar. Older bread recipes from the 1920s and 1930s were particularly more frugal about how much sugar they used.

When putting sugar that you want to caramelize on top of something, choose white sugar rather than brown sugar. You might think it’s a clever choice to use brown sugar because, being brown, it’s already halfway there in terms of colour, but brown sugar tends to blacken instead of browning owing to the impurities left in it. Beet Sugar also tends to burn more than Sugar from cane will do.

Light brown sugar where the colour doesn’t matter (use a bit more); Honey (use 25% less); Caster Sugar (use same amount).

For other substitutes see Sugar.

This web site generates income from affiliated links and ads at no cost to you to fund continued research · Information on this site is Copyright © 2022· Feel free to cite correctly, but copying whole pages for your website is content theft and will be DCMA'd.
Tagged With: White Sugar