Sugar is a sweetener generally used in a dried, crystal form.

Scientifically, “sugar” can be used to refer to different forms of sugar such as glucose, fructose, or sucrose. Glucose is found in vegetables and in some fruits. Fructose is mainly found in fruit, and is the sweetest of these three types. Sucrose, the one we use for ordinary cooking and table sugar, is a combination of the two: it is one molecule of glucose joined to one molecule of fructose.

Sucrose sugar can be derived from sugar cane or sugar beet. The most by far is produced from cane:

“The EU is the world’s leading producer of sugar beet, accounting for about half of global production. However, only 20% of the world’s sugar production comes from sugar beet, the other 80% being produced from sugar cane.” [1]What are arable crops? In: Explore How Farmers Produce Food Sustainably. University of Reading. Module 2.3. Accessed January 2021 at
https://www.futurelearn.com/courses/explore-how-farmers-produce-food-sustainably/4/steps/995592

Sugar sold to consumers labelled as “sugar” will be 99.95 % sucrose, regardless of the source.

To substitute molasses for sugar, for every cup (8 oz / 225 g) of sugar called for use 1 ⅓ cup (10 oz / 300 ml) molasses, 1 teaspoon baking soda, and reduce other liquid in the recipe by 6 tbsp. Don’t swap more than half the Sugar in a recipe for molasses.

To substitute icing sugar, use 2 cups (14 oz / 400 g) unpacked icing sugar for each cup of sugar called for.

If you want to cut down on sugar in your baking, you can substitute up to 25% of the white sugar called for with powdered milk.

For every 1 cup (225 g / 8 oz weight) of sugar, you can replace with 150 ml (5 oz) of honey. The BeeMaid honey site suggests that in baking, you should also add ½ teaspoon of baking soda, and reduce the amount of other liquid in the recipe by 2 tablespoons plus 2 teaspoons (40 ml). They further suggest reducing the cooking temperature by 15 C (25 F) to help avoid over-browning. [2]Bee Maid “Sugar to Honey” converter. Accessed August 2015 at http://www.beemaid.com/recipe-converter

Our bodies have no physiological requirement for sugar itself per se. It has just become a preferred form of carbohydrate. Dieticians recommend eating sugary foods as infrequently as possible. [3]Orfila, Caroline. What is nutrition-sensitive agriculture? In: A Nutritional Approach to Agriculture and Food Security. University of Leeds. Micro course. Step 1.2. Accessed September 2021 at https://www.futurelearn.com/courses/nutrition-sensitive-agriculture/1/steps/1168030

Don’t buy unrefined sugar because you think it is healthier; remember, all sugar is almost entirely sucrose — or it couldn’t be legally sold as sugar. Unrefined sugar may have a few more trace elements of minerals than refined, which can give it a different flavour profile, but the difference is nutritionally is negligible. So buy it if you wish for the flavour instead.

Remember that sugar was first used in Europe for medicinal purposes. That is easy to laugh at now, but then consumers fall for marketing promoting the health benefits of unrefined sugar.

Medical researchers and nutritionists are now increasingly concerned that we are consuming too many “free” sugars (such as added sugar or juices), as opposed to “bound sugars”, which are bound up in fruit:

There is increasing concern that intake of free sugars increases overall energy intake and may reduce the intake of foods containing more nutritionally adequate calories, leading to an unhealthy diet, weight gain and increased risk of NCDs.

Many negative health effects are related to excessive sugar consumption… Consequently since 2015, WHO recommends reducing the intake of free sugars to less than 10% of total energy intake (50 g/day) and a further reduction of the intake of free sugars to below 5% (25 g/day) of total energy intake is recommended for further health benefits.” — Del Castillo, Dolores, Dr. and Dr. Iriondo-DeHond. How does healthy eating prevent disease? In: Nutrition for Health and Sustainability. EIT Food. Step 2.4. Accessed July 2021 at https://www.futurelearn.com/courses/nutrition-for-health/1/steps/1072546 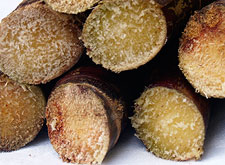 Sugar cane probably originated in the South Pacific, probably New Guinea, in fact, and was spread for cultivation into China and other parts of Asia reaching India by 500 BC at the latest, as the process for making sugar was known by then in India. By 600 AD, it had made its way to the Middle East: the Persians grew sugar cane and made sugar, and the Arabs spread knowledge of it around.

The Romans did have access to some sugar, but it was crude and unrefined sugar — not the fine, white sugar that is standard now.

Refined sugar helped make Venice rich, until explorers discovered a direct route to India to bypass Venice. Christopher Columbus brought sugar cane cuttings from the Canary Islands to the Caribbean on his second trip in 1493 and planted cane on Hispaniola (the island now shared by Haiti and The Dominican Republic).

Until the 1500s, sugar was imported from India. But after that, the Caribbean then owned the sugar market, until Europeans developed sugar beets in the late 1700s and Sugar production from beets was encouraged in the 1800s.

In 1518, the Spanish began the transatlantic slave trade to import labour for their Caribbean sugar crops.

By the start of the 1800s, the British controlled the sugar trade from the Caribbean. At this time, Napoleon ordered the mass plantings of sugar beets in France in order to reduce dependence on British supplies of sugar.

“But, sweet Ned — to sweeten which name of Ned, I give thee this pennyworth of sugar.” — Prince Henry. Henry IV Part I: Act 2. Shakespeare.