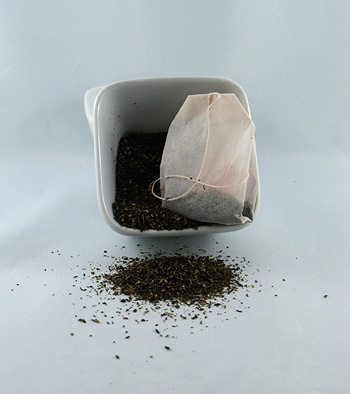 Yerba Mate is a holly shrub, whose leaves, once dried and crushed, are used for tea.

The shrub is an evergreen one, that will survive temperatures down to -6 C (21 F.) It is usually grown from seed. It can grow up to 6 metres (20 feet) tall, with toothy large leaves, and blossoming with white flowers, then producing red berries.

The leaves are harvested from December through to August. On plantations where it is cultivated, it can be mechanically harvested.

You buy the dried leaves loose packed in paper bags, or in tea bags.

The tea is drunk in Argentina, Brazil, Paraguay and Uruguay. Argentina is both the main consumer and producer, though it is also cultivated in Uruguay.

It is prepared and served in special decorated gourds, called “Mate” (whence the name of the plant.) The loose leaves or tea bag are put in the gourd, then boiling water is added. The tea may have milk added to it, or as is often the case, be flavoured with lemon juice or burnt sugar.

It is drunk through special straws called “bombillas” that can be made of silver or wood. The end of the straw that goes into the gourd is sometimes wider than the rest of the straw. It is closed off, with perforations in it. It goes in the tea, and filters out the leaves as you suck up the liquid.

The straw is often shared.

Yerba Mate has about the same amount of caffeine as in coffee.

Yerba Mate is native to Argentina, Brazil, and Paraguay.

Yerba Mate was drink by natives prior to European conquest.

By the 1670s, the Jesuits were cultivating it.

The plantations disappeared in the 1760s when Spain expelled the Jesuits from its territories, and the leaves had to be collected from the wild again.

At one time, Yerba Mate was also popular in Ecuador and Peru, but there it was replaced by actual tea.

This web site generates income from affiliated links and ads at no cost to you to fund continued research · Information on this site is Copyright © 2022· Feel free to cite correctly, but copying whole pages for your website is content theft and will be DCMA'd.
Tagged With: Argentina Food