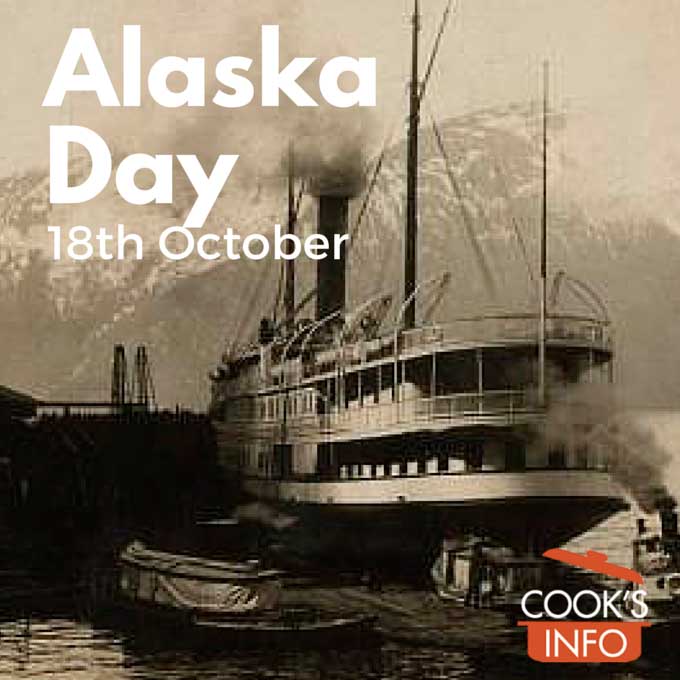 The 18th of October is Alaska Day, marking the day that Alaska officially became American soil.

Celebrations have been coordinated since 1954 by a non-profit group called “Alaska Day Festival, Incorporated.” People dress in 1867 period garb for the day, and the transfer ceremony is re-enacted. There is a costume ball with prizes for the best period garb.

Why not make a Baked Alaska today in honour of the occasion?

On 18 October 1867 at 3:30 in the afternoon, the Russian flag (the Double Eagle Imperial flag at the time) was lowered and the American flag raised at the Governor’s House on Castle Hill in Sitka, Alaska in the presence of both American and Russian troops in full dress uniform.

Alaska had previously been Russian territory. The Russians were looking to sell it, however. The Russians didn’t feel they could defend it adequately from the British, should they be at war with them again. Plus, though the Russians were aware that there was some gold in Alaska, this may only have given them all the more desire to sell it: they may have felt that hordes of Americans might just descend on the territory and take it anyway, as happened in California.

The Russians offered Alaska first to the British, but the British turned it down, which makes Canadians roll their eyes to this day. The Americans were more willing to make a deal. The sale to the United States was agreed on 29 March 1867, at a price of 2 cents an acre, for a total of $7,200,000 American dollars in gold.

The officials presiding at the October 1867 handover ceremony were, for the Americans, Major General Lovell Harrison Rousseau and on the Russian side, a Captain Alexis Pestchouroff.

With the handover, people living in Alaska at the time also had to change their calendar. Under Russia, they had still been using the Gregorian Calendar. In 1867, they switched to the Julian Calendar to be in synch with the rest of the United States.

Alaska Day was first celebrated in 1949.