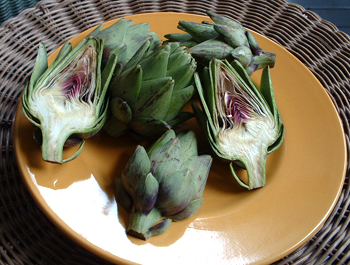 Artichokes are thistles that haven’t blossomed yet.

Inside a full-grown artichoke is the “choke”, which is the flower inside that has yet to come out. If the choke were permitted to break out in bloom, it would make a blue flower about 18 cm wide (7 inches.)

You eat the base of the artichoke, called the “heart”, and the inside leaves.

Baby artichokes are young artichokes. They are picked from lower down on the plant’s stalk, where they were growing more slowly because they didn’t get as much light. They are walnut or egg size; generally, baby artichokes will have no fuzzy choke inside. Consequently, they can be cooked and eaten whole (minus their spiky tops.)

When all the artichokes are harvested from the plant, the plant is cut back to below the soil surface to encourage new shoots. This is called stumping.

A plant is good for 5 to 10 years of production.

There are actually over 140 different varieties of artichoke plants which produce artichokes of various sizes from very small ones to ones over 10 cm wide (4 inches). Green Globe is the most common variety. The Italian violetta variety is somewhat smaller.

Choose artichokes that feel heavy for their size and are firm. The leaves should squeak when you press them together.

Spring artichokes will be light green, autumn ones will be olive green. Brown  tips are a sign of age, or frost damage. Frost damage is okay; this is called “winter kissed”, and it doesn’t affect the quality, as long as the artichoke is still green inside the petals (which are called the “scales”.) Some artichoke lovers even think the flavour of these “winter kissed” leaves is better.

Canned plain and bottled marinated artichokes can be a time and money saver in many instances for many recipes and uses. (There’s the added bonus that you are only buying edible parts: when buying fresh artichokes, most of what you buy is discarded.) BBC Good Food says:

“Artichokes can be bought fresh, canned in water or marinated in jars with olive oil and herbs. Canned artichokes offer great value for money but are typically canned in water with salt and citric acid to prevent discolouration. It’s a good idea to rinse them before use to remove any excess salt. Canned varieties are also softer in texture than marinated or fresh varieties so they won’t need as much cooking. When using the marinated variety consider the herbs and spices used in the marinade to ensure they are compatible with the flavours and ingredients in your recipe – be aware that these may also have added salt.” [1]Health benefits of artichokes. In: BBC Good Food. Healthy Cooking Made Easy with BBC Good Food. Micro course. Step 4.17. Accessed August 2021 at https://www.futurelearn.com/courses/healthy-cooking-made-easy-with-bbc-good-food/2/steps/1224921

Basic Artichoke Prep: To prepare artichokes, have a slice of lemon handy. Wash the artichoke, and make sure there is no dirt between the leaves. Cut off the stem and pull off the lower petals. Cut off the top ½ inch (1 cm) of the artichoke. Trim the tips of the leaves to get the thorns off. Every cut you make on an artichoke, rub that newly-exposed surface with your piece of lemon.

If you want to scoop out the choke in the kitchen so that your guests don’t have to do it at the table, cut off the top third of the artichoke and the stem, spread the leaves open to expose the choke, and dig it out with a spoon or melon-baller until no more of the choke remains on the sides and you are clean through to the bottom of the artichoke.

A pressure cooker is a very good way of cooking artichokes; it only takes about 15 minutes. Microwaving them is even faster, about 5 minutes, but they can come out leathery.

To grill artichokes on a grill, prep as per “Basic Artichoke Prep” above. Cut the Artichokes in half, scoop out choke (if necessary; if they are baby ones, you might not need to); toss with a mixture of olive oil and coarse salt (ratio: ½ teaspoon coarse salt per 1 tablespoon olive oil). Put the halves directly over medium-high heat on an already heated grill. Cook until tender, about 8 to 10 minutes. Turn once or twice during cooking.

Don’t let anything iron or aluminum (including aluminum foil) come into contact with an artichoke; it will turn the artichoke shades ranging from grey to black and blue.

If you are going to try to serve a wine with artichokes, it needs to be a very acidic wine, or the taste of the artichokes will ruin the wine. You are probably better off serving a fine beer with artichokes.

Baby artichokes can be eaten raw. [2]”I had no idea that some people ate artichokes raw until I visited my wife’s parents in the Loire valley. Even as a committed devourer of the unusual and exotic, this seemed a little weird to me. Still, I watched the delight with which they began stripping off the raw, delicate leaves and smearing the base of each one with a little salty butter before nibbling away contentedly. Of course, I joined in – and I would encourage you to try it yourself if you are lucky enough to get hold of very fresh, small, young artichokes (best grow them yourself). There is a slight astringency, but also a delicious, raw nuttiness that you don’t get with cooked artichokes.” — Fearnley-Whittingstall, Hugh. Have a heart. Manchester: The Guardian. 21 June 2008.

Artichokes are rich in fibre, particularly inulin, which may promote gut health.

Additionally, “artichokes are loaded with micronutrients including:

Interestingly, note that “some of the antioxidant capacity [of an artichoke] increases on cooking, especially after boiling or steaming.” [4]Health benefits of artichokes. In: BBC Good Food.

Store uncooked, fresh artichokes in fridge unwashed. Either stand in water as you would a flower, or store with a damp paper towel in a sealed plastic bag. You should be able to keep them for up to 4 days.

Store cooked artichokes in a plastic container in the fridge for up to 4 days.

Artichokes were grown by the Greeks and Romans; the Romans considered them a delicacy. Artichokes became scarce in Europe after the fall of the Roman Empire, but were re-introduced to Spain and Sicily by the Arabs. The Arabs called it “al’qarshuf”, whence our word.

Artichokes were introduced into the UK in 1500s, and into the US in the 1800s by French immigrants to Louisiana.

The writer Philip Morton Shand, the grandfather of Camilla Shand, wife to Charles, the Prince of Wales, wrote of artichokes:

‘How hymn the praises of this sublime vegetable? The languid pleasure of pulling off its petals one by one and, with lingering teeth, voluptuously creaming them of those velvety pads of blandly melting waxen manna.’ — Philip Morton Shand: A Book of Food. 1927.

Artichokes are used in making an Italian aperitif called “cynar”. It may not be globe artichokes that are used, however. At a charity quiz night in Nov 2003 hosted by Anne Robinson (of “Weakest Link” TV show fame), Clarissa Dickson Wright (of “Fat Ladies'” fame) insisted that one of the answers was wrong and that it was not globe artichokes which were used, but the reportage didn’t go on to say what she felt the correct answer was.

“These things are just plain annoying. After all the trouble you go to, you get about as much actual ‘food’ out of eating an Artichoke as you would from licking 30 or 40 postage stamps. Have the shrimp cocktail instead.” — Miss Piggy

Marilyn Monroe was crowned Artichoke Queen in Castroville, California in 1949.

A Globe Artichoke is basically what you think of when you think of an Artichoke. It’s now being called a Globe Artichoke owing to the confusion with Jerusalem Artichokes, which no one had heard of anyway, so in a way this situation is all very unnecessary. Everyone agrees that “Jerusalem Artichoke” is just about the most unhelpful, irrelevant and misleading name in the world for a root vegetable. There was a chance to rename it before the latest popularization attempt began, and it’s not as though green grocers haven’t rewritten half the dictionary already anyway by the conjectures they scribble on their cardboard bin signs… but alas.

In Italian, an Artichoke is called “carciofo”, though in some parts of Northern Italy the word “articiocco” is used.

This web site generates income from affiliated links and ads at no cost to you to fund continued research · Information on this site is Copyright © 2023· Feel free to cite correctly, but copying whole pages for your website is content theft and will be DCMA'd.
Tagged With: Ancient Greece, Roman Food