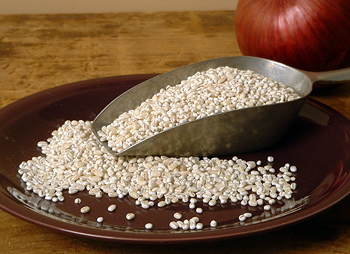 Pearl barley is the most common form of barley available in stores today. It looks like a small, ivory pearl.

It is the most refined barley sold.

Because of the bran being removed, we are likely immediately to think Pearl Barley has only downsides; but in fact, it has a few upsides as well.

Pot cooking: In a pot, bring 750 ml (3 cups) of water to the boil. Add 225 g (1 cup) of pearl barley, stir. When it returns to a boil, cover, lower heat to a simmer, and cook for a minimum of 45 minutes. When done, all the water should be absorbed and the barley should be tender. If the barley is old (i.e. has been stored a long time, either at a warehouse, store or your place), it may take longer to cook.

Pressure cooking: soak first in a quantity of room temperature water 4 times the quantity of pearl barley you are using. Allow to soak for 4 hours, or overnight. Then allow 18 minutes of cooking time in a pressure cooker. If cooking on its own (as it, not in a soup), cook in 1 litre (4 cups) of water per 225g / 250 ml (1 cup) of pearl barley, along with 1 teaspoon of oil to keep down froth. Allow pressure to release naturally through steam vent, then drain. (Tip! reserve the water for soups.)

Pearl Barley contains about 80 per cent starch and about 6 per cent proteins and cellulose.

Because more of the kernel is exposed in pearl barley than in other forms of barley, it is useful in making barley water as more of its good can leach into the water. Barley water is an old-fashioned restorative for people who are ill, and a healthy drink for children.