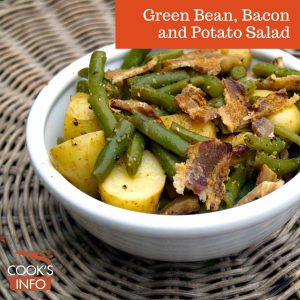 This is a light tasting potato salad, though the bacon and potato will still satisfy hearty appetites. You can make this ahead and refrigerate it (in fact, the flavours are better made a day or half a day ahead) but as it's meant to be served warm, bring it back to room temperature before serving.
Print Recipe Pin Recipe
Prep Time 25 mins
Cook Time 20 mins
Total Time 45 mins
Course Potatoes, Salads
Servings 4

Instead of new potatoes, you can use salad potatoes. Or larger waxy potatoes, and just cut them up more. For the bacon, use American-style bacon (aka streaky bacon in the UK), or pancetta. For the green beans, you can use frozen or fresh. You can also use runner beans. This recipe is easily doubled or tripled.
Tried this recipe?Let us know how it was!
Previous Post: « Spinach and Tomato Baked Gnocchi Recipe
Next Post: Lima Beans in Tomato Sauce Recipe »
Tagged With: Bacon, Green Beans, New Potatoes, Potato Salad